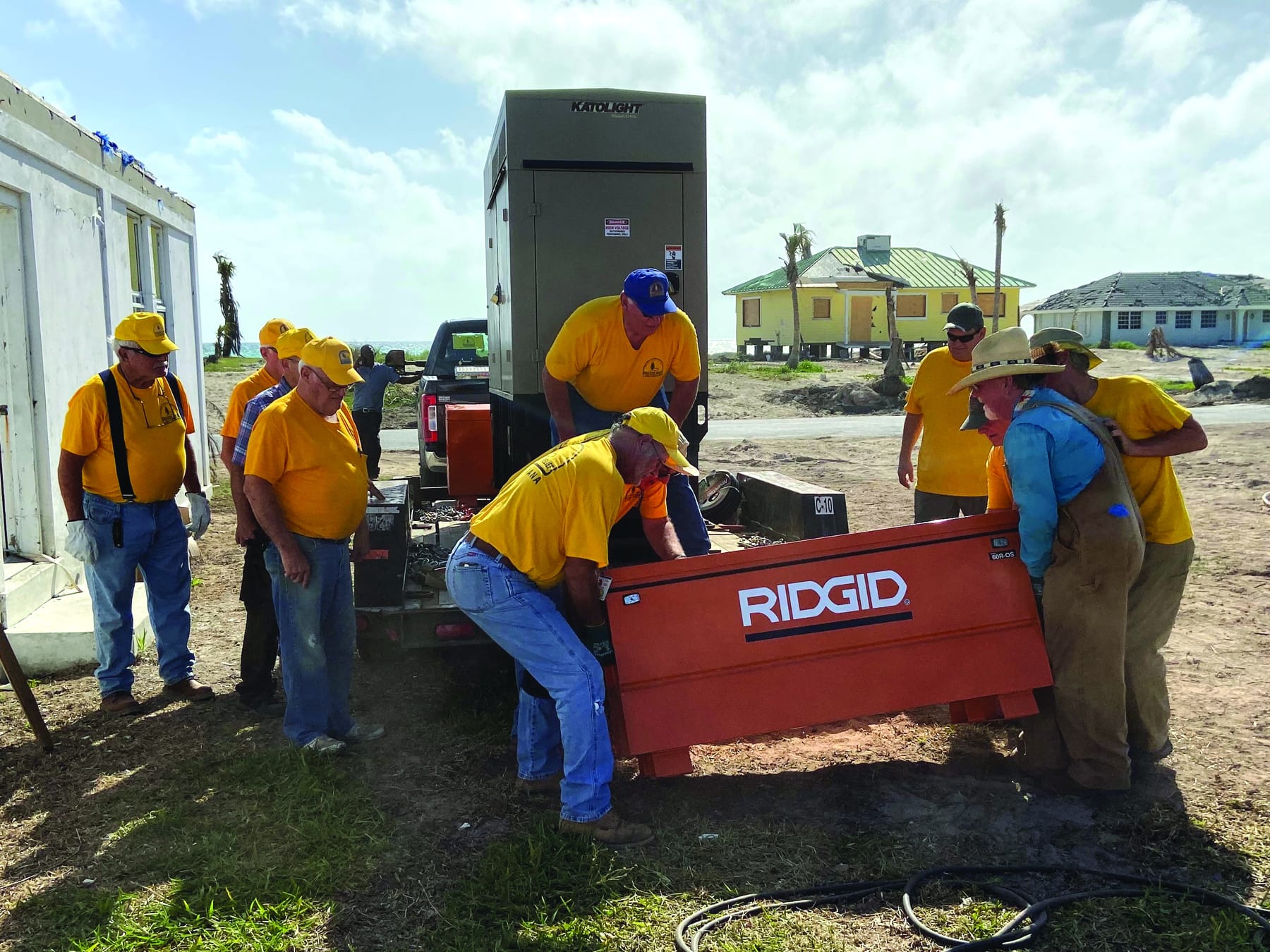 Members of the Louisiana Baptist Disaster Relief team unloaded a tool chest on December 4 while establishing a base camp for future teams that will rebuild St. Matthew Baptist Church. The team consisted of 13 volunteers. Submitted photo

PELICAN POINT, East Grand Bahamas (LBM) — In early December, Louisiana Baptists began a mission to rebuild the 128-year-old St. Matthew Baptist Church that was destroyed by Hurricane Dorian Sept. 2, 2019, and the ongoing effort is expected to continue for at least six more months.

According to Gibbie McMillan, Louisiana Baptists’ disaster relief strategist, a team of 13 people from the Louisiana and Mississippi Baptist state conventions worked from Dec. 4-10, 2019, to establish a base camp for future teams that will rebuild the church in Pelican Point on the East Grand Bahamas Island.

The team built a portable shower and bathroom facilities; constructed a floor for a tent used for lodging; installed electrical lines that provide power from a generator (lent by Philadelphia Louisiana Baptist; and, set up a washing machine, refrigerator, stove, freezer and griddle other teams will use at the base camp. The crew also brought 60 cots and 80 blankets that were donated by the American Red Cross.

“We are providing a place of worship for the first church established on the Grand Bahama Island,” McMillan told the Baptist Message. “We are taking part in building back the oldest church in the Bahamas. They are a lovely people that need to know that God has not forsaken them. They are very appreciative and very respectful of those who come to help. Their world, literally, was turned upside down and they are in dire need of help. They cannot help themselves and that is why we are there.”

St. Matthew Baptist Church is one of nine of the 13 Baptist churches on the islands severely damaged or completely destroyed by the storm that packed 185-mileper hour winds at the height of the storm.

Louisiana is among several states participating in ‘Bahama Rebuild,’ a joint partnership with the International Mission Board and Baptist Global Response. Louisiana and Mississippi are sending teams to rebuild St. Matthew Baptist while the Alabama and North Carolina Baptist state conventions are sending additional teams to undertake other rebuild projects on the islands.

Two weeks after the team returned to the United States, the St. Matthews Baptist congregation worshiped underneath the tent for their first Sunday service together since Dorian.

Another team is scheduled to leave for the Bahamas Jan. 18. The group will comprise 25 members from Alabama, Louisiana and Mississippi who will demolish the existing concrete walls and begin building new ones. They are the only crew scheduled to work on St. Matthews Baptist Church as of now, but future units will be formed, McMillan said.

The project will cost between $225,000 and $250,000, according to John Hebert, Louisiana Baptists’ director of missions and ministry. Hebert encouraged Louisiana Baptists to provide funds and consider being a part of one of the teams.

“These churches hit hardest by the storm are the center of the communities,” Hebert said. “Without the intervention of outside help, the process for them to rebuild would be extended an unbelievably long time because they don’t have the resources to get it done. It might take years. The money given is going to help speed up the work for the Kingdom. We want to encourage our churches to give and to go. Contact our offices to sign up to be a part of this amazing rebuild that will touch many lives in ways we may never know.”

For more information about giving to the effort or being a part of a team, visit the Louisiana Baptists Disaster Relief website.

By Waylon Bailey Recently, I saw a tweet on Twitter that asked the question, “What would Jesus do in the midst of a worldwide pandemic?” No answer to the question was given, but the author obviously had an agenda and a suggested answer. The good news is that it led me to really ask, “What would Jesus … END_OF_DOCUMENT_TOKEN_TO_BE_REPLACED