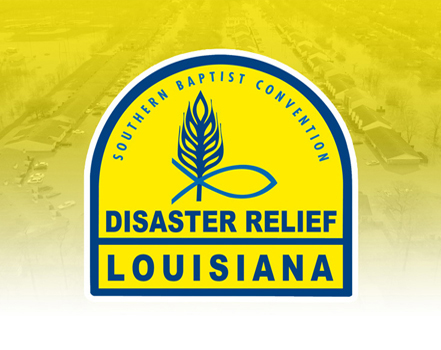 Louisiana Baptist Disaster Relief crews spent the weekend assessing damage and clearing debris from properties that were impacted by a strong line of storms that came through the state.

The National Weather Service confirmed a tornado touched down on Bolden Road in St. Landry Parish at 2:06 am Saturday. The tornado destroyed several homes, including a single wide mobile home that rolled for more than 320 yards and caused the death of a man inside the residence. St. Landry Parish Police Jury President Jessie Bellard confirmed the fatality as Jose Antonio Higareda, 27.

The National Weather Service also reported that seven other people in the area were injured, 15 homes were damaged, numerous trees and power lines were snapped and some barns and outbuildings were destroyed.

Further north, Jerry Smith, 48, died after a tree snapped and fell onto his mobile home in Blanchard late Friday, KTAL-TV reported. Caddo Parish Sheriff deputies, who responded to the scene around 6:30 p.m., said a neighbor heard the tree fall and went to investigate for himself.

By Chuck Kelley Rarely does Hollywood contact a Southern Baptist seminary, but rarely is not never. One day location scouts for a major motion picture to be filmed in New Orleans called NOBTS and asked to tour the campus. They were looking for a place that with a bit of movie magic could be made to look like the … END_OF_DOCUMENT_TOKEN_TO_BE_REPLACED