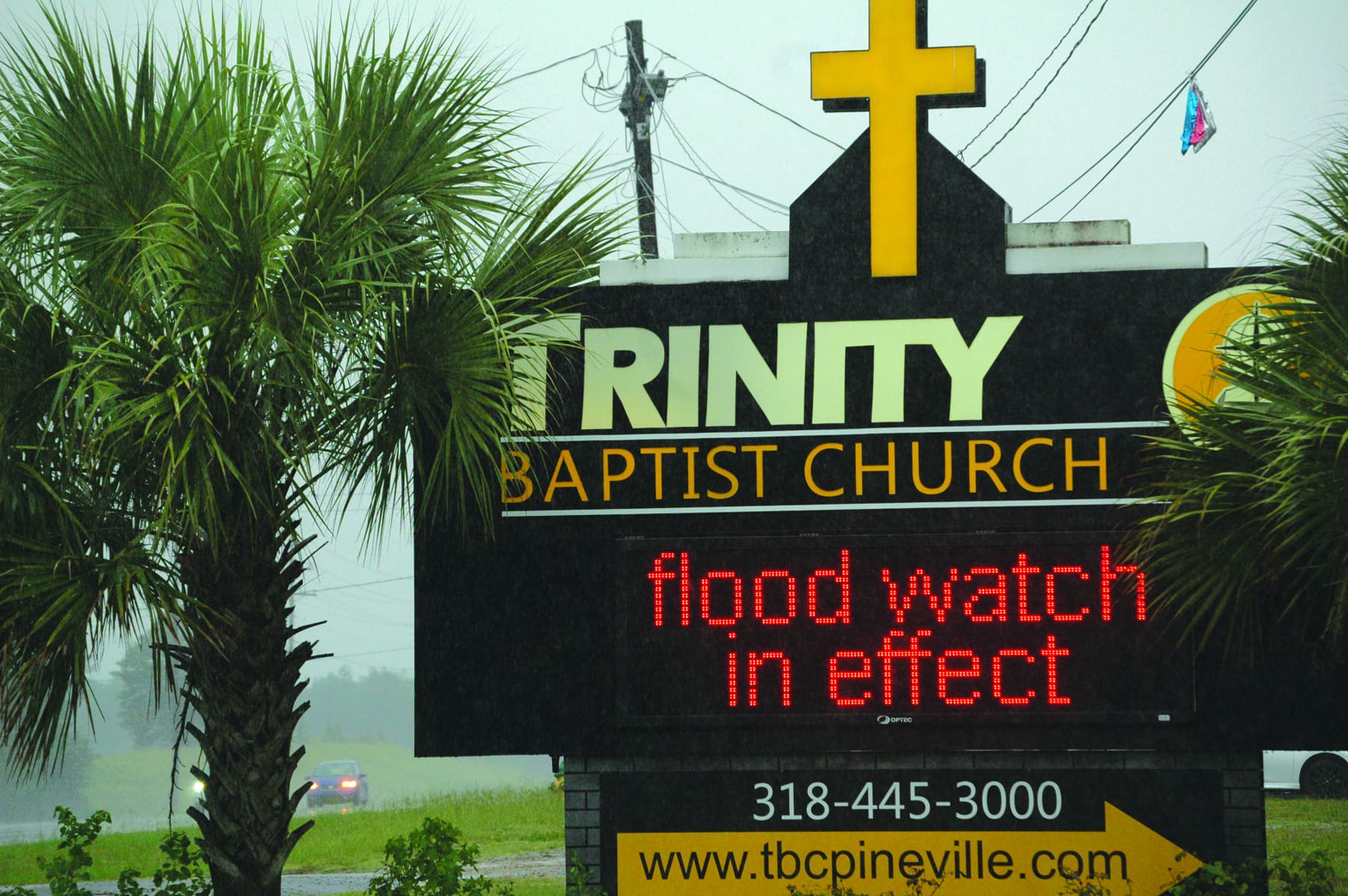 The digital sign at Trinity Baptist Church in Pineville cautions drivers of the potential for flash flooding as a heavy rain shower passes through the area. Many parishes in south and central Louisiana are under a flash flood warning as the remnants of Tropical Storm, now depression, Barry continues to dump up to 20 inches of rain.

Oakdale and Oberlin in Allen Parish have both received the largest accumulations of water and are facing serious flooding, NWS noted. Radar and gauge measurements indicate some areas in the parish have received nearly 17 inches of rain with widespread totals of 6 to 12 inches of rain since Sunday evening.

“Moreauville has some really serious flooding right now, which is affecting a lot of people,” said Jacob Crawford, director of missions for the Louisiana Baptist Association, the oldest local association in the state. “It is a miracle there has not been more flooding than what there is right now.”

Crawford also reported that the mission center in Simmesport had some minor flooding and church planter Reggie Arvie, St. James, Bunkie, had some flooding in his home.

“Last night (July 15) was one of the worst nights I have experienced with the rain, wind, lightning and thunder but we are doing well here,” said Gil Arthur, pastor of the First Baptist Church in DeQuincy. “As far as I know, by God’s grace, we have been spared.

“We have folks ready to go out and help, but so far no one has requested assistance,” said Arthur. “The water is high, but none of our members have reported flooding in their houses. There is no flooding at the church.”

In Oakdale streets are flooded and water has intruded into the town’s high school.

“I sent a text to all pastors in Mt. Olive to check on them and none have responded back so I’m assuming all is good with them,” said Jerry Johnson, director of missions for the Mt. Olive Baptist Association.

Ville Platte Police Chief Neal Lartigue posted on the police department’s Facebook page that most streets in the city are flooded and urged motorists to stay off the roads.

“Emergency personnel may not be able to get to you if you become stranded on a flooded road.,” he said. “Remember that even if a road is not blocked off, water can be deep which could not only leave you stranded but could also push water into nearby homes.”

Kevin West, senior pastor of the First Baptist Church in Ville Platte, told the Baptist Message he was unable to reach the church property because roads into the city were blocked. However, Garland Foreman, publisher of the newspaper Ville Platte Gazette, said a bayou that runs by the church had overflowed its banks and water was around the church.

By Joe McKeever RIDGELAND, Miss. – “You shall know that the Lord has sent me to do all these things, for this is not my doing” (Numbers 16:28). “Lord, God of Abraham, Isaac, and Israel, let it be known this day that You are God in Israel and I am Your servant, and I have done all these things at Your word” … END_OF_DOCUMENT_TOKEN_TO_BE_REPLACED