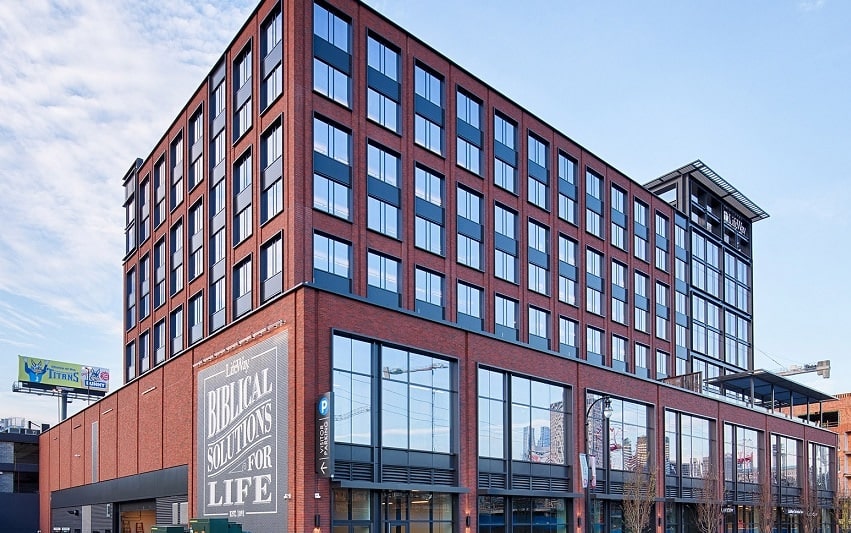 The LifeWay complex as shown in 2019. In 2016, then LifeWay CEO Thom Rainer said “we're willing to pay a premium to stay in downtown Nashville compared to other opportunities” when asked about locating in such a pricey part of Nashville after selling its former headquarters for $125 million. At the time, the publishing arm of the Southern Baptist Convention was running a deficit for six years, according to data published by Baptist Press. LifeWay photo

Corrected, Oct. 12, to indicate a change in church membership for J.D. Perry.

NASHVILLE, Tenn. (LBM)—A recording made by an unknown LifeWay employee purports to contain remarks by Ben Mandrell, LifeWay’s president and CEO, claiming that the lucrative deal given his predecessor Thom Rainer was negotiated without the input, oversight or knowledge of the board of trustees elected by the Southern Baptist Convention.

The alleged Oct. 7 exchange with LifeWay employees was in response to the recent whirlwind of controversy surrounding a LifeWay lawsuit against Rainer for breaking terms of his severance agreement which included at least $1 million and a non-compete clause that was to run until October 2021. 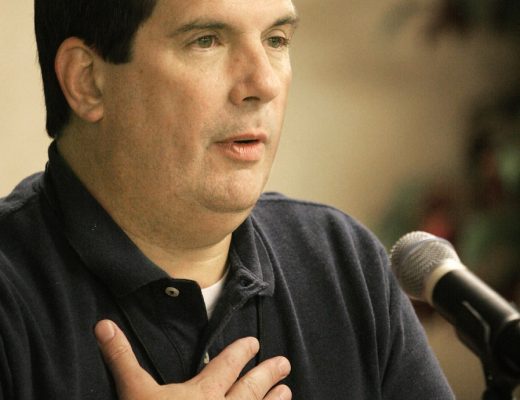 In this 2006 Baptist Press photo at Lifeway’s former Glorieta Conference Center (sold in 2013 for $1) CEO Thom Rainer is shown telling trustees “Being a Christian resource provider is a tough business. I don’t like to talk about competition, but we’ve got to do something different if we are going to be an effective, viable ministry in the future.” He also said LifeWay Christian Stores had a “breakout year” with a proven business model that separates it from competitors and that future prospects are encouraging, according to the Baptist Press report. BP photo

Rainer was CEO of LifeWay from February 2006 through February 2019. Before that he was a professor for 12 years at Southern Baptist Theological Seminary.

During his tenure at Lifeway, the $500 million publishing arm of the Southern Baptist Convention experienced eight consecutive years of multi-million dollar losses prior to Rainer announcing in 2017 his intention to resign in 2018. He stayed in leadership through February 2019, the month before the announced closing of all 170 LifeWay bookstores. A Baptist Press analysis of LifeWay’s 2010-2017 audits showed “total operating expenses exceeded sales,” growing in deficit each year from $2.3 million to $35.5 million. Additionally, LifeWay sold its downtown headquarters for $125 million and relocated to the Gulch, a toney and pricey area of Nashville. At the time of that decision, in 2016, Rainer told the Nashville Business Journal that “we’re willing to pay a premium to stay in downtown Nashville compared to other opportunities.”

Now, Lifeway has placed for sale its venerated Ridgecrest Conference Center in North Carolina and is contemplating the same for its three-year-old headquarters.

At this time, the nearly new nine-story Nashville property, known as Capitol View Plaza, is listed for lease with Colliers International at $32 per square foot and includes “a full floor conferencing center with seating for up to 700, full workout facility, cafeteria, spacious outdoor terrace with Wi-Fi, on-site security, structured parking.”

Mandrell has been directing Lifeway about a year, since August 2019.

Both Mandrell (in the leaked recording) and LifeWay’s trustee officers (in a leaked memo) indicated that the sweetheart deal for Rainer, one of the top paid executives in the SBC, was made without the consent or even knowledge of the trustees responsible for such decisions.

Mandrell said that in an effort to save some jobs at LifeWay he had contacted Rainer to seek return of some of the money given him, telling his predecessor, “such a generous transition agreement in my opinion should have been approved with a larger set of eyes.”

Meanwhile, a supposed Oct. 3 letter from LifeWay’s trustee officers states that the “transition agreement” with Rainer was “signed by then Board Chairman Jimmy Scroggins and former Senior Vice President of Organizational Development Selma Wilson … without being reviewed by or with knowledge of the Compensation Committee of Executive Committee.”

Scroggins is pastor of Family Church, formerly the First Baptist Church, in West Palm Beach, Florida. He has been a LifeWay trustee since 2014 and served as chairman of the LifeWay board from 2018-2020. His second term ends in 2022. Lifeway has published materials by Scroggins in 2016 and 2020 and a book is slated for release in 2021, according to advertising on lifeway.com and amazon.com. Consequently, his service as a LifeWay trustee since 2016 appears to be in violation of SBC Bylaw 15. F. which states that no person or their spouse is eligible to serve on the board of an SBC entity “from which the person receives, directly or indirectly, any form of payment or financial benefit … or, which provides funds for which he/she has a duty of administration. When such conditions become applicable, that person or that person’s spouse shall be considered as having resigned and such vacancy shall be filled in accordance with established Convention procedure.”

The leaked memo explained that Scroggins had agreed to retain Rainer as “an employee of LifeWay and provided him with full salary and benefits until Oct. 31, 2020 and gifted him a new car.” Since “retiring” in February, Rainer has been paid a transitional salary of more than $1 million, plus benefits, not including royalty payments on his books published by LifeWay, according to the memo.

The LifeWay officers identified with the letter are: Todd Fannin, chairman, a businessman and a member of Life Fellowship Church, Pryor, Oklahoma; J.D. Perry, vice chairman, a businessman and a member of Woodlawn Baptist Church, Baton Rouge, Louisiana; and, Amy Mielock, secretary, [unknown vocation], a member of First Baptist Church, Cary, North Carolina. They said Rainer abrogated the terms of his transition agreement by seeking a book contract and other business relationship with Tyndale House Publishers, a LifeWay competitor.

According to Baptist Press, Sept. 30, LifeWay had paused its lawsuit in order to allow both parties to explore “the possibility of an agreed upon resolution of the differences.”

The Nashville Business Journal provided an update, Oct. 7, that LifeWay and Rainer had resolved their differences, citing a joint statement that said “Rainer has agreed to honor the transition agreement, including the non-compete clause. He has agreed not to move forward with his business partnership with Tyndale House Publishers, which was a violation of his non-compete agreement.”

Meanwhile, in the recording Mandrell is heard telling LifeWay employees his top priority is to create a new ethos at the company.

“So the most important thing I’m doing in my first year as president is resetting the culture,” he said, adding that such a change “starts at the top.”

“So I have to live out the values, I have to embody them. Otherwise, they are just fancy words and cool fonts on a wall,” he explained. “So when we say, when I say, that we care about character, what do we mean by that? We mean that we are far more interested in who we are before God than what we do for people. We must model integrity, we must keep standards high.”

By Lane Corley MADISONVILLE, La. - Three years ago, our family was going through one of those down seasons in the ups and downs of life. My mental focus and physical health was declining. I was discouraged and struggling mentally and emotionally. I knew I needed to change a few habits. As part of a recovery … END_OF_DOCUMENT_TOKEN_TO_BE_REPLACED