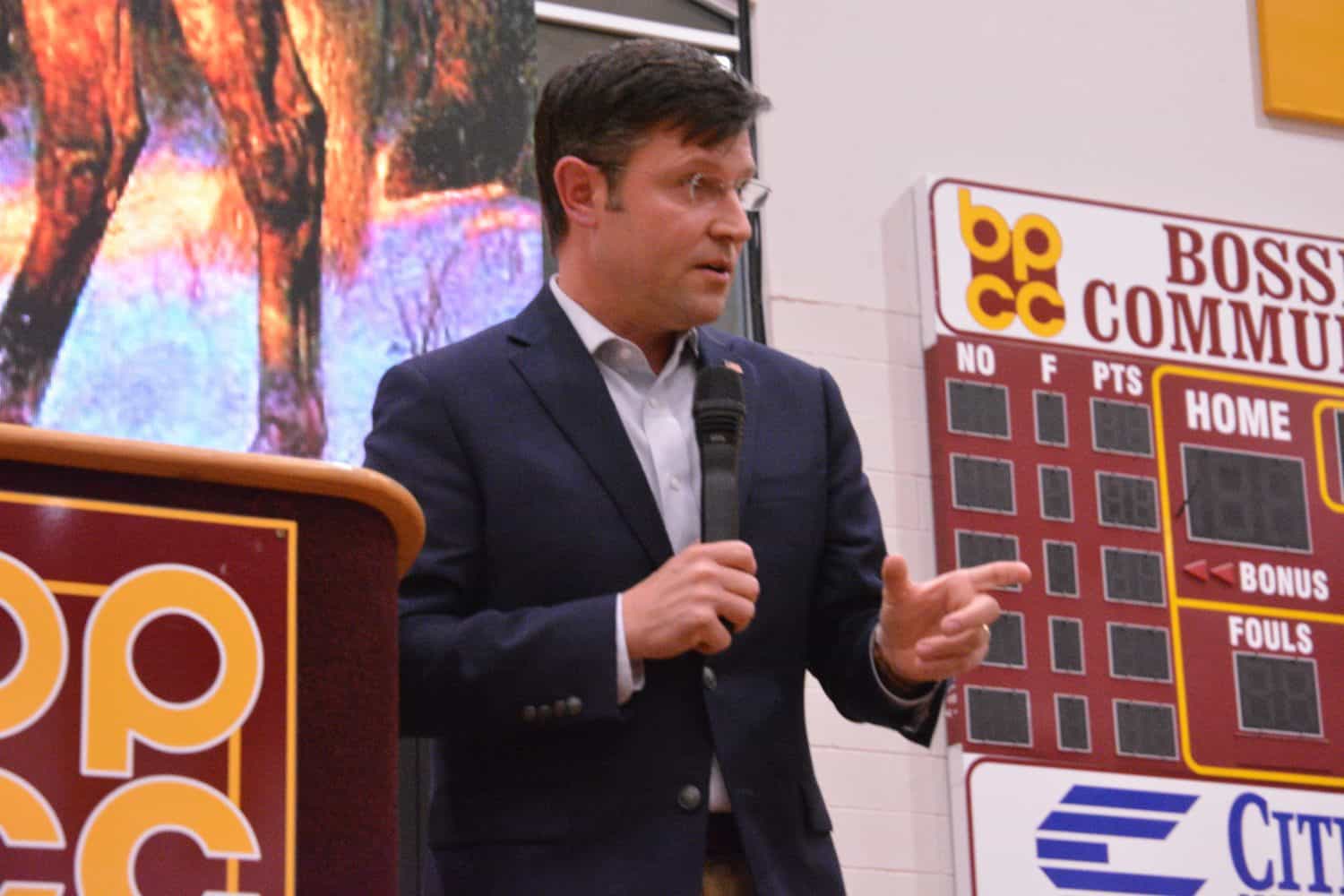 U.S. Rep. Mike Johnson gives a presentation on religious rights students have in public schools during the Student Freedom Summit.

BOSSIER/WEBSTER PARISHES – Students received a crash course on the right to freely express their religious beliefs in public schools during the Student Freedom Summit in Bossier and Webster parishes Sunday, April 8.

Louisiana Attorney General Jeff Landry and Congressman Mike Johnson briefed the students about the legal rights they have to share their faith in public schools. The summit was held at First Baptist Church in Minden and Bossier Parish Community College, located in parishes where atheist groups are targeting the school administrations for allegedly promoting Christianity. Community members, pastors, parents and some school officials joined the students at the summit.

Supporters were encouraged the following day to draw a blue line on their hands and post photos on social media using the hashtag #STANDUPBOSSIER and #STANDUPWEBSTER.

Johnson, a member of First Baptist Church in Bossier City, challenged students to mirror their actions after Elijah, who stood up for God’s truth. He stressed the importance of engaging in respectful debate that could change minds.

The American Civil Liberties Union filed the lawsuit in December against Webster Parish Schools and Americans United for Separation of Church and State filed another in March against Bossier Parish Schools.

In Webster Parish, the ACLU filed the lawsuit on behalf of Christy Cole and her daughter, Kaylee, who is a junior at Lakeside Junior and Senior High School in Sibley. The lawsuit states Cole, who was raised Baptist but now is agnostic, had become “increasingly alarmed by the pervasive religious indoctrination to which students in the district are subject.”

The lawsuit also claims the school district “has a longstanding custom, policy, and practice of promoting and inculcating Christian religious beliefs by sponsoring religious activities and conveying religious messages to students, including by broadcasting prayers daily over school speakers.”

Allegations against the district include school-sponsored prayer, religious messages and/or proselytizing at school events. The lawsuit claims Kaylee felt coerced into participation of religious activities that violate her beliefs.

The lawsuit against Bossier Parish Schools was filed by the Americans United for Separation of Church and State on behalf of seven parents who claim “students who have been identified as believers in minority faiths or no faith at all have been subject to attacks, harassment, and ostracism by their classmates.”

The parents indicated in the lawsuit they and their children wish to remain anonymous, and need “protection against public exposure of their private religious beliefs, as well as protection against harassment and increased ostracism of their minor children attending Bossier Parish’s public schools.”

Students, pastors and other community members have responded by scheduling rallies such as the Student Freedom Summit and writing letters of support to school administrators in Bossier and Webster parishes. 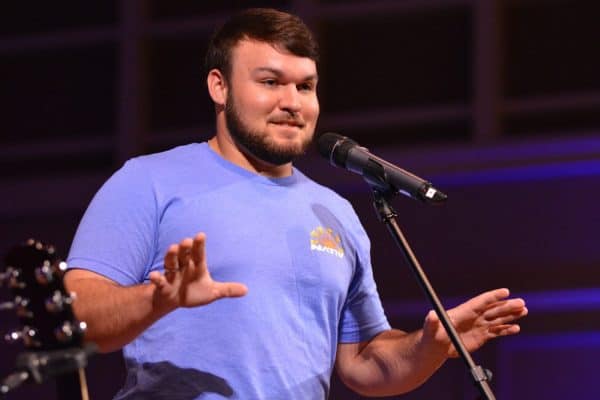 Haynes Mandino, a student at Minden High School, said events like the Student Freedom Summit are ways to show how prayer can unite Christians. Mandino is a member of First Baptist Church in Minden.

Jurkovich told the Baptist Message the event served as a pep rally for students and their supporters who the following day posted on social media photos of blue lines on their hands.

“It was so cool looking at the crowd for the Freedom Student Summit and seeing so many students, pastors and adults of every age,” said Jurkovich, pastor of First Baptist Church in Bossier City. “Clearly this is an issue so many take seriously and I believe students will be even more bold with their faith in the public arena because they looked around and saw so many standing with them at the Freedom Student Summit.”

Johnson said during the summit that the reason for the current conflict is a series of cultural shifts that have led to the chaos.

“And now they have created a whole generation of Americans who have the allergic knee jerk reaction to all things religious,” Johnson said. “It’s like somebody says religion or they see an old religious symbol, they just want to sanitize it, they want to knock it out. It’s bad. It’s evil. They’ve almost convinced a generation of school kids about this. It’s a campaign of fear and intimidation and misinformation and leads to all sorts of chaos. It’s led to lawsuits like we have in Webster and Bossier right now.”

Despite the two lawsuits, Johnson said students have never lost their rights to share their faith.

“That’s the good news,” Johnson said. “That’s what we are here today for. We do need to draw a line. We do need to take a stand because there is much to stand for.”

Johnson referenced a publication that Landry and he created to answer many of the most frequently asked legal questions and misconceptions about religion on campus. “The Louisiana Student Rights Review” is available as a free online resource at: http://www.mikejohnsonforlouisiana.com/religious_expression_in_schools.

“We did our best to summarize what are the rights of students,” he said. “It is getting out. It is being used all over the state and we are so grateful for that.”

Johnson emphasized while the government cannot be involved in advancing religion in public schools, they also must remain neutral.

“The school district itself is not supposed to be favoring or advancing religion,” he said. “But they cannot show hostility toward religion either.

“All student-led, student-initiated religious expression is always constitutional,” he continued. “Unless it’s disruptive to the school day, your kids can still engage in religious speech and be the salt and light on campus.”

In his remarks, Landry shared a story of how minister Peter Muhlenberg believed God was calling him to become a voice to a British government that he believed was infringing upon the Christian’s right to religious freedom in 18th century America. Eventually, he became so distressed that he resigned from his church and formed the 8th Virginia Regiment of the Continental Army.

“Over 200 plus years ago, someone drew the line,” Landry said. “Someone recognized that our faith and our freedom are intertwined. And there is never a time where it matters more than now. Thank you for standing up. Thank you for believing. And stay strong.”

Brad Watson, student minister of Eastwood Baptist Church in Haughton, told the Baptist Message the summit made him thankful to be a youth pastor to students who are standing strong in the face of hostility.

“Adversity won’t stop us from equipping, motivating and mobilizing students to stand up for their faith,” he said. “We will be stronger because we came together and showed that we are united in Christ. Hundreds of students showed up and made their stand and I could not be more proud. Now, we will continue to pray for them and walk along side of them as they share the gospel and stand up for their rights on their campuses.”

Brandon Lewis, student minister at First Baptist Church in Haughton, said the summit was important so his youth could be reminded about their rights in public school.

“It’s important to gather for encouragement to see they are not alone in living out their faith,” he said. “There are some rights they aren’t aware of, so this is an important event to make them aware of those rights.”

By Lane Corley MADISONVILLE, La. - In Luke 15, Jesus gives us a glimpse of the Father’s heart for the lost. 1. Those far from God liked Jesus and he liked them (verse 1). Is that true of me? When was the last time someone far from God approached me? Am I available to them? Building relationships with … END_OF_DOCUMENT_TOKEN_TO_BE_REPLACED