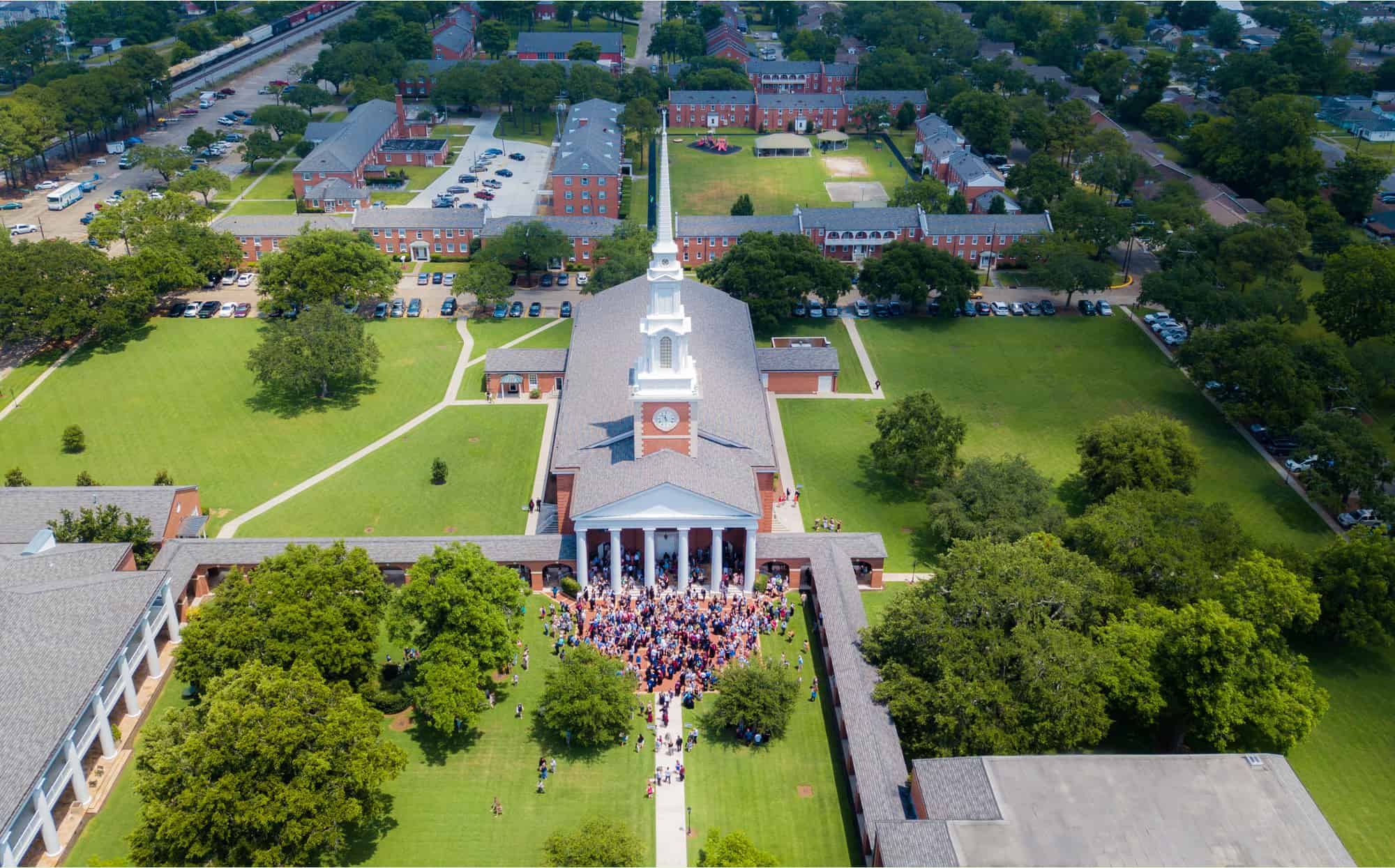 This year’s top graduating bachelor’s student, Jerome Bradley, exemplifies this dedication to the local church, Strong said. Bradley, who will continue as a master’s student at NOBTS in the fall, sensed a call to ministry while serving as a Sunday School teacher at Franklin Avenue Baptist Church in New Orleans. Retired after 33 years in the military and federal government service, Bradley began studying at Leavell College with the goal of becoming a chaplain. Throughout his time in the undergraduate program, Bradley continued to teach at his church and serves as a counselor at the Bridge City Youth Detention Center.

“Our students have not forsaken the church but instead, see that the church still has a great place in the Kingdom,” Strong said.

Known first as the School of Christian Training, Leavell College began offering full bachelor’s degrees during the 1992-1993 school year. From the beginning, the college prioritized adult learners seeking a basic level of ministry training. In the early years, Leavell College only accepted students 25 years of age or older. Jimmy Dukes, the first dean of the four-year college, designed the bachelor’s program with the idea that many of the school’s graduates would continue their study in the NOBTS graduate program.

While the age restriction has been removed, Leavell College still attracts many adult learners transitioning from other careers along with traditional, college-aged students. All students who attend Leavell College are required to articulate a call to ministry and must be endorsed by a church.

In 1997, the college was renamed the College of Undergraduate Studies at NOBTS to better reflect its expanded mission. In 2003, NOBTS trustees approved the Leavell College name to honor the outstanding contributions of the Leavell family. Landrum Leavell II, NOBTS president from 1975 until 1995, was president of the seminary when the four-year college was founded. Earlier, Roland Q. Leavell served as the seminary’s president from 1946 until 1958 and was instrumental in the acquisition and construction of the current NOBTS campus.

The passion which led to the creation of Leavell College stretches all the way back to the seminary’s beginnings 100 years ago, as well as the first attempts at establishing a college, dating to the 1950s.

NOBTS, the Baptist Bible Institute at the time, was founded in 1917 as a graduate school tasked with training pastors, ministers and missionaries. A four-year college degree was required for entrance into the degree programs. Noting a number of God-called ministers in the area did not have a college degree, visionary leaders at BBI created courses to offer basic ministry training for non-degree students.

The first efforts to formalize the undergraduate program came when NOBTS applied for membership in the American Association of Theological Schools in 1954. Because the accrediting agency only worked with graduate institutions, NOBTS created the School of Christian Training (SCT) to oversee the undergraduate program. The SCT had a separate faculty that taught certificate and diploma-level courses when the school opened in 1956, although initial plans called for the development of a four-year, undergraduate degree.

The first incarnation of the SCT was short-lived. By 1958, NOBTS officials dropped plans to develop undergraduate degree programs, but continued to offer certificate and diploma training through the department of Christian training for those without a college degree.

The School of Christian Training was reinstituted in 1976 to bring better focus to the ongoing undergraduate training efforts. The second incarnation of SCT offered diplomas and associate degrees in multiple languages at multiple sites. Ray Rust, who passed away earlier this year, helped reestablish SCT and served as acting director during the first year.

The SCT was led by a series of committed leaders, including first full-time director Fred Moseley, who served from 1977 until 1981; Jerry Breazeale, who was named director in 1981 and served until 1989; and, Dukes, who led the school from 1990 until 1999. Under Dukes’ leadership, SCT developed and implemented four-year degrees designed to prepare students for graduate study.

One of the first men Dukes hired to serve on the faculty of the new college was Strong, who now serves as the school’s dean. Strong joined the faculty as a New Testament professor. In 1999, when Dukes was asked to lead the seminary’s growing extension center system, Strong was selected to serve as the dean of the college.

Leavell College continues to play a vital role in the life of NOBTS, serving as one of the top feeder colleges for NOBTS graduate-level students.

By Lane Corley MADISONVILLE, La. - Three years ago, our family was going through one of those down seasons in the ups and downs of life. My mental focus and physical health was declining. I was discouraged and struggling mentally and emotionally. I knew I needed to change a few habits. As part of a recovery … END_OF_DOCUMENT_TOKEN_TO_BE_REPLACED