PINEVILLE – As the man following in the footsteps of legendary Louisiana College basketball coach Gene Rushing, Reni Mason knew the 2015-2016 season would pose a challenge.

As a matter of fact, it would have been challenging regardless who followed Rushing, an LC icon who retired last year after 29 years as the Wildcats’ coach.

The team, though, exceeded expectations, Mason said, explaining that the team made a first-ever trip to the American Southwest Conference Tournament Championship game. 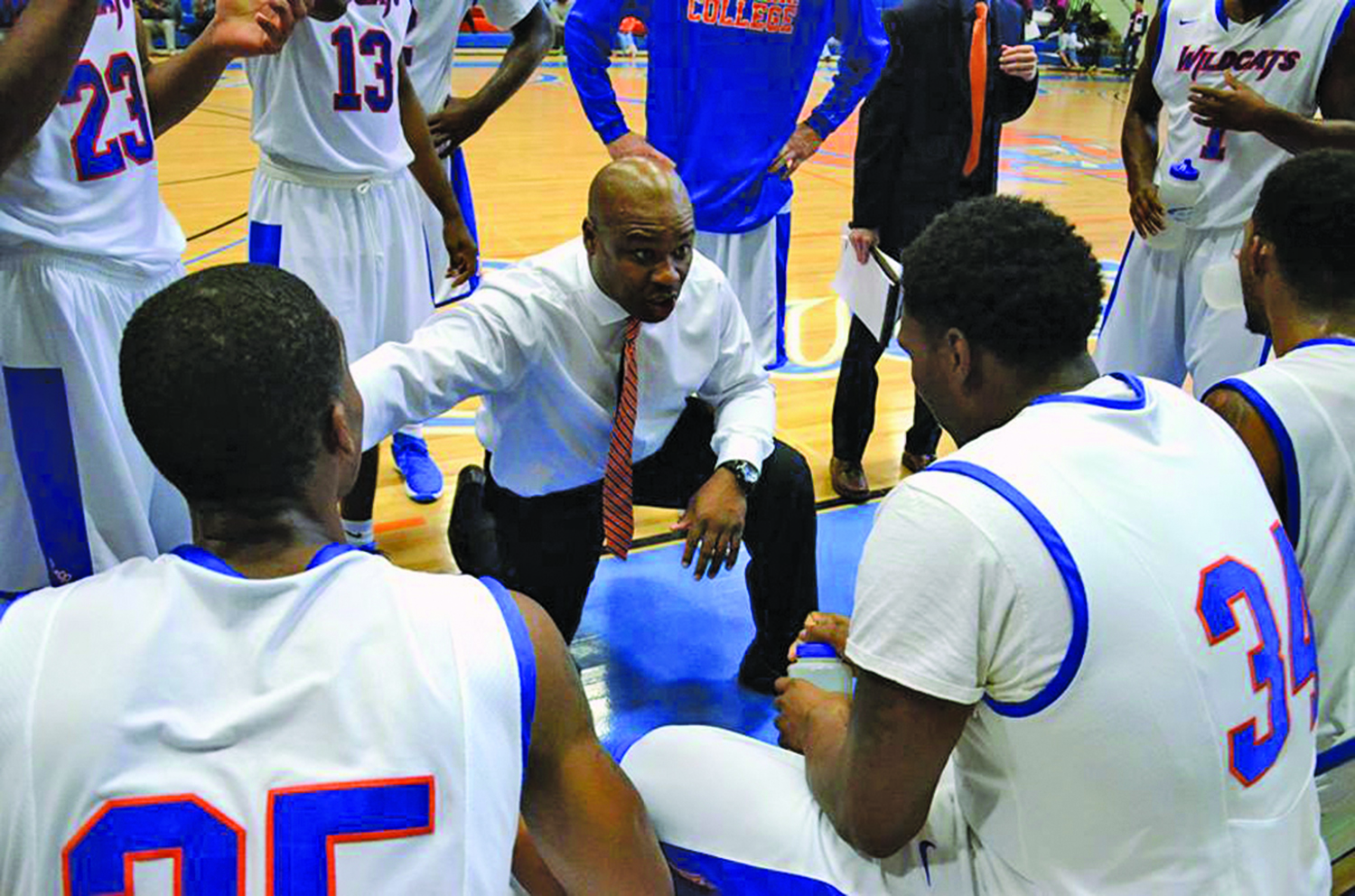 “For seven years I coached at Evangel Christian Academy [in Shreveport] and I really enjoyed it,” said Mason.

“However, it wasn’t until the last year or so there did I start to think about getting back into college basketball,” Mason said.

The 44-year-old Mason played collegiately at Louisiana Tech before transferring to the University of New Orleans. He also spent several years as a college assistant — at Division I UNO and Division II Minnesota-Morris — as well as stints as an assistant coach in the United States Basketball League and as coach of a touring team in Atlanta.

“This opportunity at Louisiana Collage was presented by God, and I thought it was imperative I listen to the voice of God,” Mason said.

Mason was a late entry into the pool of more than 75 applicants but quickly made the short list, making a strong favorable impression on the search committee.

“He grabbed the hands of the president and I both in that last interview and he prayed about the situation,” Dunn continued. “At that point I think Dr. Brewer had a confirmation in his heart that Reni was our guy. From the day he got the job until now, he has been a Godsend to us.”

Louisiana College president Rick Brewer also was impressed with Mason from the start.

“From my initial meeting with Coach Mason, it was obvious to me that he was a winner on every level; professionally, personally, and spiritually,” said Brewer.

“It was clear to me he would be the type of transformational leader I wanted on the LC ‘team’ and that his ability to coach and influence young men would be consistent with the coaching legend he was following at LC. When his wife Stephanie spoke at the press conference, I knew the Lord had led us to not only the right coach but to the right family.”

The Wildcats started the season 2-8, but were able to catch their stride after Christmas and posted a 12-4 record, including an impressive 7-1 mark at home in ASC play and a conference tournament run to the championship game.

“I have a lot of respect for Coach Rushing, not only for what he’s done as a basketball coach, but who he is as a man. He left this program in great shape but it was important for us to change the culture to fit the instructions God had given us.”

Changing the culture of a program is nothing new to Mason.

Evangel Principal Albert Dean and Head of School Jerry Erickson used those same words to describe what Mason did in his seven years in Shreveport.

“As a former player, I saw the change in the culture of the program when he came. He brought discipline and gave those young men a sense of purpose. He instilled a real sense of godliness in their lives,” Dean said. “You think at a Christian school like Evangel everyone may be that, but that’s not always the case.

“Kids come from a lot of different backgrounds,” he added, “some just for athletics, but his influence was more than just sports.”

Erickson said his influence on the court led to him becoming “our student disciplinarian on campus.”

“That’s a narrow title; he really became a discipler of all of our kids,” Erikson explained. “He was speaking into the lives of hundreds of kids on a daily basis. He was not easy. He challenged them all to live a moral life, to live a godly life, challenged them to put into practice the discipline that would allow them to be successful long term.

“He immediately set out a bar of excellence — excellence to God. His kids would even begin to change even their physical look, their willingness to serve,” he continued. “All of these things that are fruits of the life of somebody who is willing to pour into them and disciple them, love them, and hold them to high standards. He literally changed the culture of this place.”

“He is a Kingdom guy, meaning he knows the principles of God’s Word, he lives them out, he believes in them, he holds himself to those things” Erickson said. “He is truly Jesus first. Reni is very humble. He doesn’t reach out and grab the attention, he doesn’t grab the next level up, he is willing to serve and he serves well.”

“From day one, Reni has been faithful to the call of God, the will of God, and the purpose of God. He fulfills the Word of God to go make disciples. Yes, he’s excellent at his craft, basketball, solid in his fundamentals, those are all great things, but even more importantly, he cares about the heart and the character of each young man that he is responsible for,” Erickson said.

With a season under his belt, Mason is excited about the future of the program and continuing what God has called him to do — coach basketball and pour himself into the lives of students all over the campus.

“Since we’ve been here, God has put us in positions where we can really mentor young adults. In high school we dealt with adolescents; now we’re dealing with men who are transitioning into the real world,” Mason said.

“We feel very fortunate God has blessed our family with this opportunity at Louisiana College. I’m a great believer that the Lord will not bless me and not include my family. I think it’s important that our young men learn the value of family and the importance of harkening to the voice of God,” he noted.

“I’m sure if you ask Reni he’d say his greatest accomplishment this year was not the conference tournament or playing in the championship,” Dunn said, “but the fact that several of those kids that he’s coached found Christ under his leadership.”

“That speaks to who Reni Mason is, and we believe that he’ll continue to build this pro-gram into one of the finest in the nation,” Dunn continued. “I think he’s built on the legacy that was left here and will continue to build upon it, and it will be done with a culture that he’s established from the beginning.”