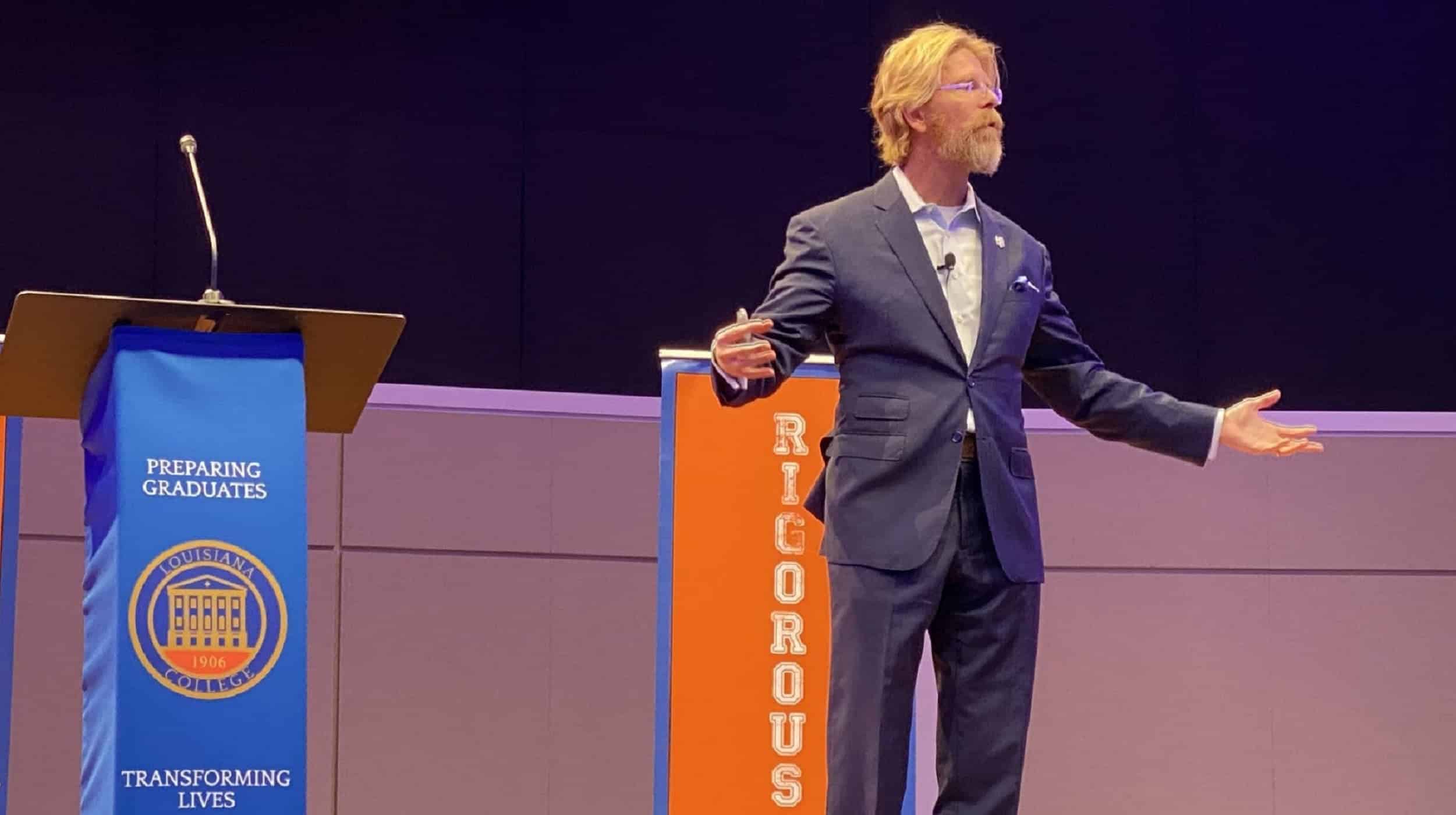 “God creates the sand, but then he leaves it to us to create fiber optic cables and computer chips made effectively of sand,” said Richards, an assistant research professor with the Busch School of Business, Catholic University of America, Washington, D.C. “God could have created computer chips directly and instead he left us with the materials to do it ourselves.”

Richards said free enterprise maximizes opportunities to create value and wealth that did not exist beforehand. Free enterprise is not perfect, he added, but it is the economic system most compatible with the Christian worldview.

“It doesn’t usher in a utopian Heaven on earth, but it’s the best of the available alternatives,” he said.

Richards said some people fail to grasp this concept because they hold various “myths” about economics, such as the thought that the essence of free enterprise is based on greed and that economic trade requires a winner and a loser, he said.

He shared with the packed crowd that he became interested in the topic as a freshman in college when he read “The Communist Manifesto,” but was quick to state that his understanding of economic realities has changed 180 degrees since then.

Like many college students, he said, he had a flawed concept of socialism, as do many people today, because the term is never really defined by the news media or in individual debate or conversation. Socialism is not the act of people freely sharing their property and their wealth, he said. Instead, the literal definition of socialism is the government seizes all property and controls all means to earn money.

Meanwhile, acting in one’s self-interest does not equate to selfishness, he countered. Rather, it often means others benefit as well.

“Trade, when it’s free on both sides, is actually mutually beneficial,” he argued. “It’s not a zero-sum game. It’s win-win.

“The Golden Rule assumes this view of self-interest,” Richards said. But he added that despite myths to the contrary, the first century Church was not socialist.

In socialism, the government confiscates private property, he explained. By contrast, the thousands of new believers who were birthed at Pentecost voluntarily shared their possessions and wealth with one another because many had lost income while away from their jobs in order to observe Passover in Jerusalem.

“Socialism isn’t you and your friends sharing your stuff,” he said. “What was happening in the early church in Jerusalem was not centurions knocking down doors and confiscating the means of production.

“[Believers] were taking their own property and voluntarily choosing to sell it and then to share among their fellow believers, he noted, adding that whatever it was, it was not not socialism nor communism.

Richards said free enterprise is fragile. “Of all the economic systems we’ve tried, this is the best alternative, but it’s also the most unstable. Don’t think just because you have it that you necessarily have it for long.”

But he also pointed out that socialism has failed in every instance.

“If you get socialism, you are going to get massive violations of human rights,” he said. “It has been tried several dozen times in the 20th century and ended in disaster and is still disastrous in places like North Korea and Venezuela.”

He added that since the collapse of the Union of Soviet Socialist Republics, more than a billion people have emerged from poverty through free enterprise.

Richards said, regrettably, he has noticed a swing back toward what he described as “soft socialism,” in part because no one is asking tough questions of politicians who claim to espouse socialistic ideals.

“The media unfortunately have become, for the most part, kind of a PR arm for a certain class of politicians,” Richards observed. He said the media does not challenge “politicians, with 25 houses and who live in multi-million-dollar houses in Georgetown,” that such a lifestyle “doesn’t look like socialism.

“But they don’t do that, unfortunately,” Richards said. “And this is part of the problem, and so you get a lot of uncritical advocacy of this without any pushback, and that is the basic reality.”

Richards is the executive editor of “The Stream,” an online source of breaking news, analysis and inspiration with a Christian view, and a senior fellow with the Discovery Institute’s Center on Wealth, Poverty and Morality. In addition to writing many academic articles, books and popular essays on a wide variety of subjects, he edited the award-winning anthology “God & Evolution,” and co-authored “The Privileged Planet.” His most recent book is “The Human Advantage.”

By Don F. Mabry ALEXANDRIA, La. (LBM)-- The number of churches in our country constantly is changing and it is very difficult to acquire information from the various denominations, but estimates indicate that there are 330,000 Christian churches and congregations in the United States today. But the question … END_OF_DOCUMENT_TOKEN_TO_BE_REPLACED