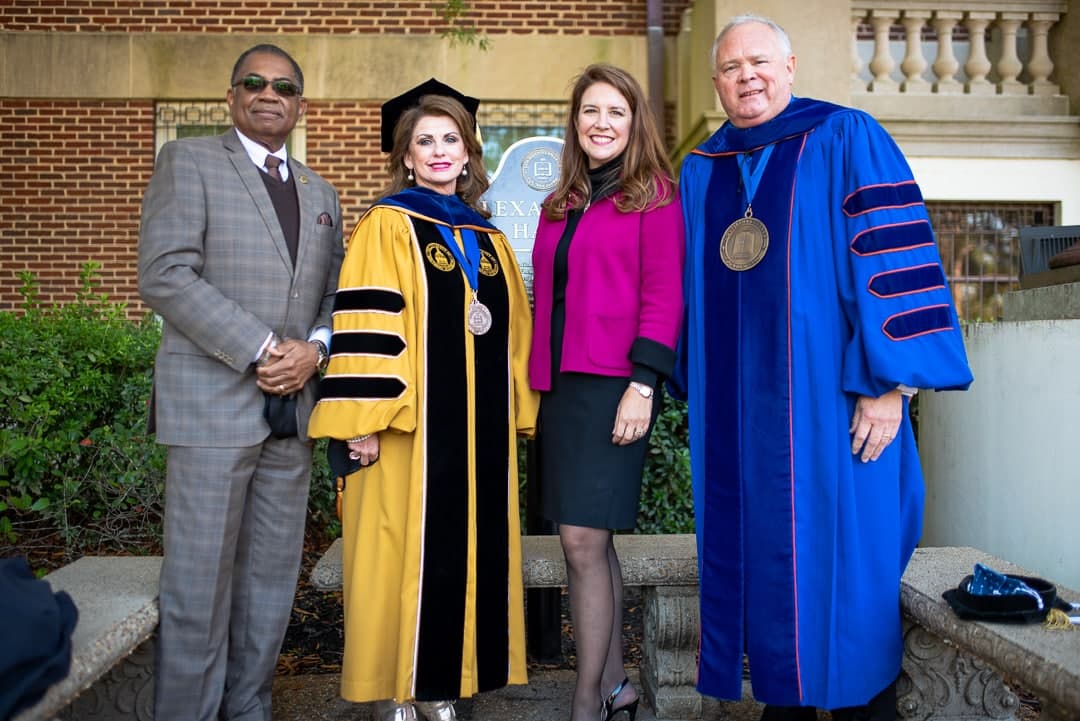 PINEVILLE, La. (LBM) – Louisiana College honored its long-standing relationship with the city of Alexandria during the annual Founders Day celebration Oct. 29 by unveiling a historical marker in front of the building that bears the community’s name.

When it was constructed in 1920, the cities of Alexandria and Pineville jointly contributed $100,000 of the $325,000 needed to complete the project.

Hall added that the college’s presence has made central Louisiana a better place to live and work.

He referenced a 2018 study by the Louisiana Association of Independent Colleges and Universities (LAICU), which recorded that LC generated more than $35 million in goods and services, $13 million in new household income and supported more than 350 private sector jobs in the Alexandria and Pineville metropolitan area.

“At the time (of Alexandria Hall’s founding), LC President Claybrook Cottingham, noted the school wasn’t asking for charity or a handout. He called it an investment in Alexandria’s future. He was right,” Hall said. “The result was an ongoing economic impact.”

Susan Broussard, a 1992 alumna of LC, recalled the impact the college had on her life as a student and in her career. A commuter from the small town of Effie, Broussard experienced a broadening of her world geographically, as well as eternally through the exponential growth of her faith.

Quoting F. Scott Fitzgerald, the author of The Great Gatsby, Broussard cited how LC’s liberal arts education provided her the necessary ability to be successful in her personal and professional life.

“The idea that we can hold two opposing thoughts in mind at the same time and still function is the innate ability to have critical thinking skills,” Broussard said. “And with that ability, then you can bring value to whatever job you have.”

Alena Noakes of Wildcats Media contributed to this report

By Tim Patrick DERIDDER, La. – Many of you know we lost our oldest son in October. David was an IMB (Southern Baptist) missionary. His death gives me an inside view that many of you do not possess. This year, that view carries greater weight than ever. I share this view with you so that (hopefully) you will … END_OF_DOCUMENT_TOKEN_TO_BE_REPLACED