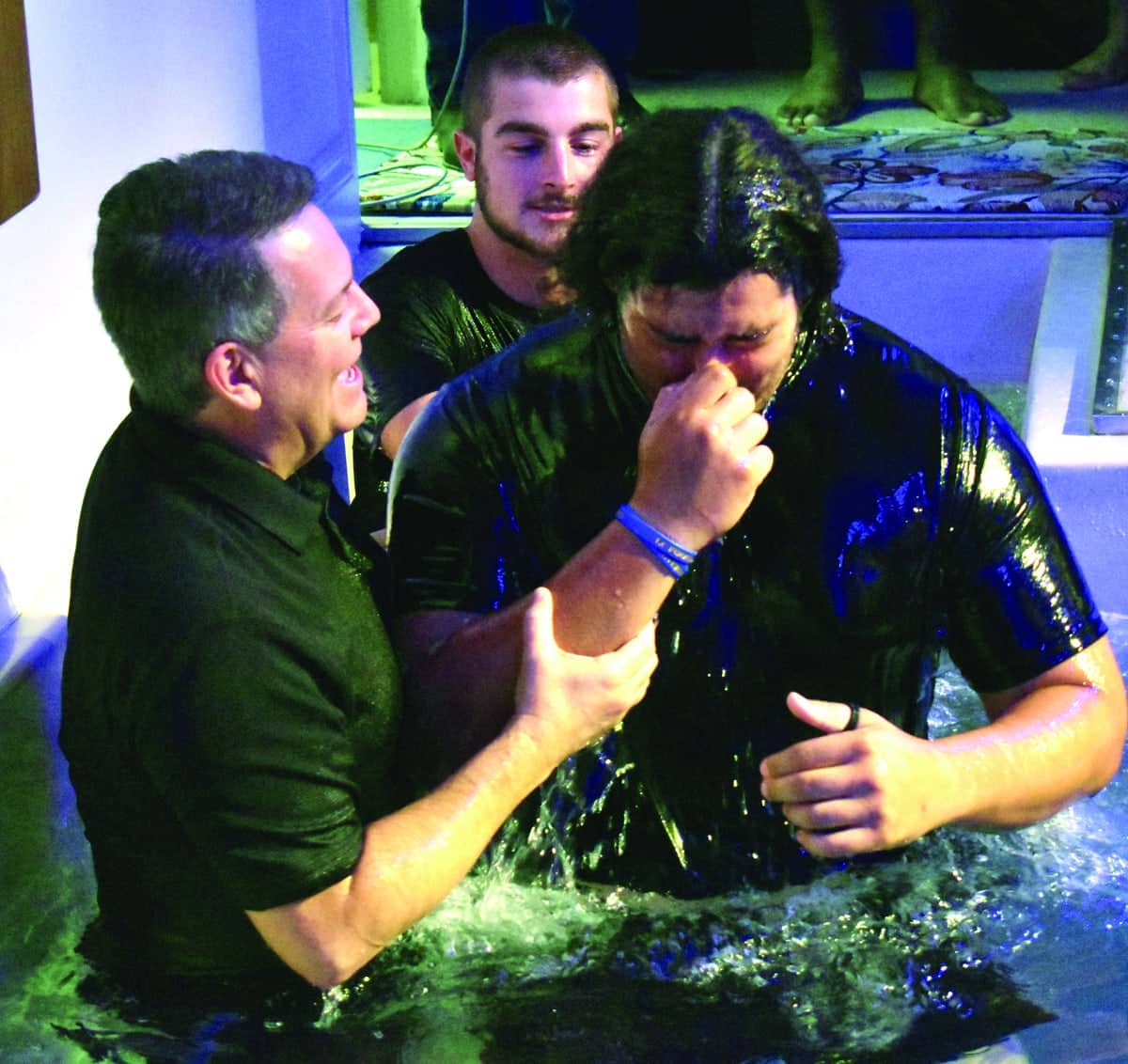 DEVILLE, La. (LBM) – On Oct. 2, the Louisiana College football team posted their first victory as a member of the National Association of Intercollegiate Athletics, but the following day scored an even bigger win as six players shared their newfound faith before classmates and friends during a special baptism service at Philadelphia Baptist Church, Deville, which also has a campus on Horseshoe Drive in Alexandria.

Coach Drew Maddox said he was overcome with emotion as he watched so many of his players, one[1]by-one, stir the baptistery waters. Fifteen other new believing wildcats were unable to attend the special service but have since been baptized at other churches or they plan to take part in baptism soon.

“It’s such a great feeling seeing these guys take such a bold step in their faith,” Maddox told the Baptist Message. “From the first day we meet as a team, I share with them my testimony and use others to also plant those seeds that hopefully will result in some of them accepting Christ. Anytime you meet the Lord it’s bigger than football.”

Jaden Conley, a freshman from Springfield, said he was convicted to give his life to Christ after hearing Maddox share his testimony during a team devotional.

“It’s like a thrill, a happy thrill,” Conley said moments after his baptism. “Coach Maddox told us we need to live out Christ every play and every day. I have since started reading the Bible and that has helped me to grow in my faith.”

La’Corey Buckley, a freshman from Center, Texas, turned to Christ during a worship service the team attended at Heart of Worship Church, Pineville. During his childhood, Buckley’s grandmother, Lodi, poured spiritual truth into him that finally bore fruit as a college student. 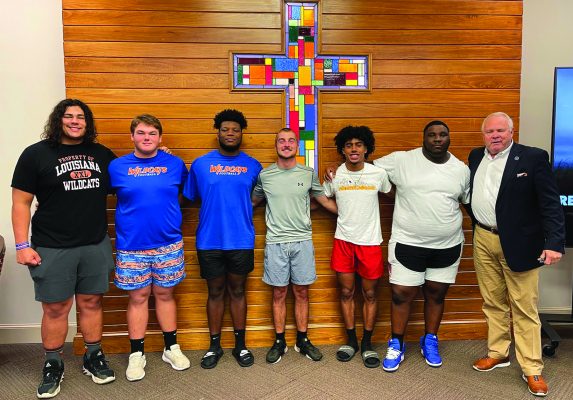 Six of the 21 Louisiana College football players who have accepted Christ since the start of the fall semester
were baptized Oct. 3. The school reported more than 40 students have made decisions for Jesus since August. Brian Blackwell photo

“I heard my Granny talk about Jesus all the time and it kind of hit home when I heard the Gospel presented at the worship service we attended,” he said. “My baptism was a way to set an example to other guys and I’m praying those who don’t know Jesus will accept Him. That’s my prayer.”

“We give God the glory for the continuation of His Holy spirit working through intentional ministry encounters since the beginning of this academic year at Louisiana College,” LC President Rick Brewer said. “Indeed, we pray for Kingdom advancement as we faithfully prepare graduates and transform lives in and out of the classroom. May a new Jesus generation rise up among our students at Louisiana’s Baptist university.”

By Lane Corley MADISONVILLE, La. - Three years ago, our family was going through one of those down seasons in the ups and downs of life. My mental focus and physical health was declining. I was discouraged and struggling mentally and emotionally. I knew I needed to change a few habits. As part of a recovery … END_OF_DOCUMENT_TOKEN_TO_BE_REPLACED