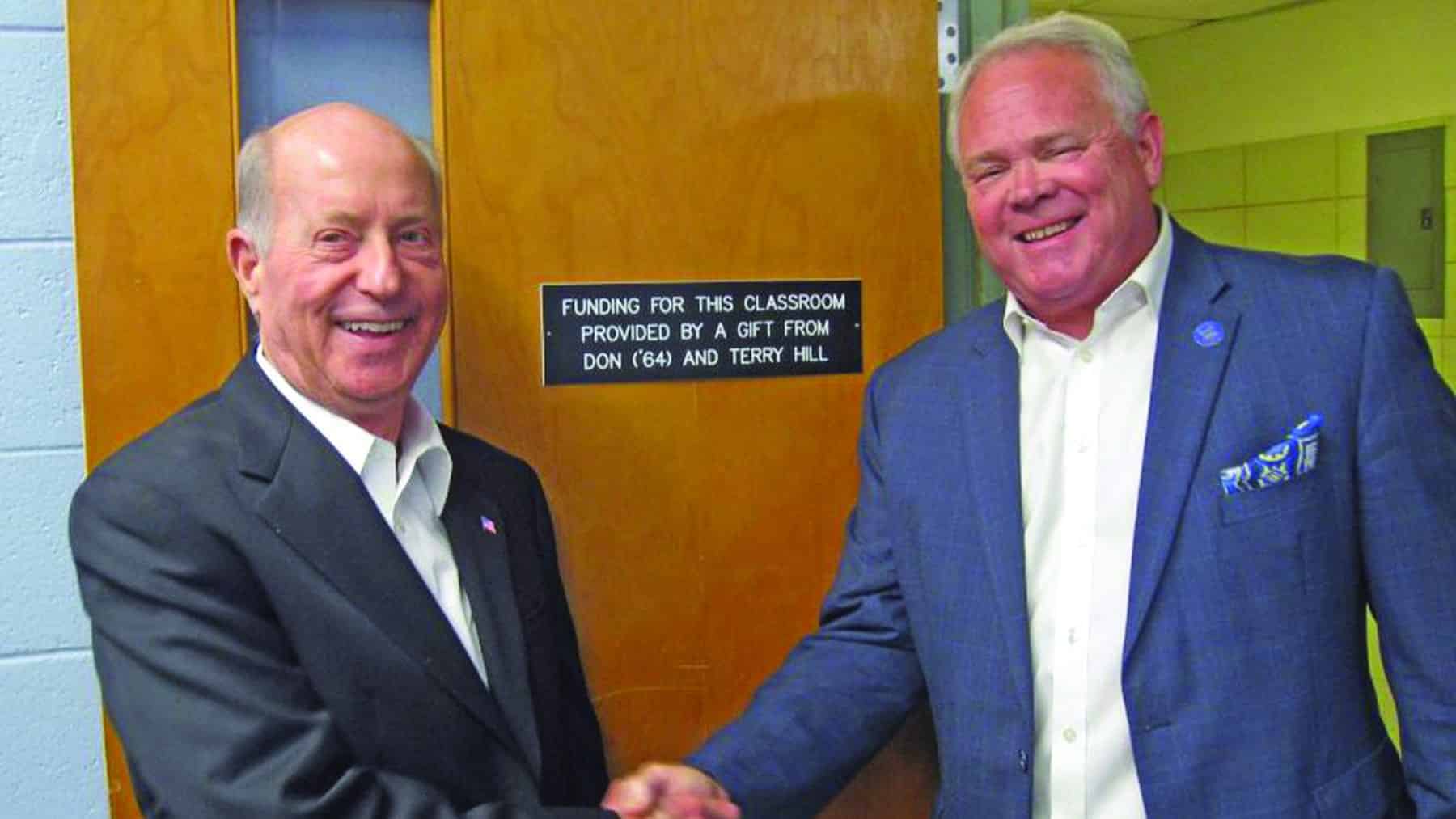 PINEVILLE, LA (LBM) — An act of generosity that began with a $100 scholarship for one Baton Rouge teenager has multiplied many times over during the last 60 years to affect countless young people at Louisiana College.

Don Hill, president of DMH & Associates, a company that provides consulting and marketing services to clients in the financial services industry, said that $100 was enough back in 1960 to tilt the scales for him, and he enrolled in Louisiana College to study math and business.

As a high school senior, Hill was given a $100 scholarship to attend Louisiana College, and that settled his college decision.

“My whole life has been God leading me,” he said. “Louisiana College was the right spot for me.”

The Hills have been providing scholarships for five LC students each year for several years now through the Board of Visitors Scholarship Fund started by the school’s president, Rick Brewer, in 2015. The Hills were founding members.

They also have used various ways to give back to LC from cash donations–from donating appreciated stocks to making Qualified Charitable Distributions (QCD) from his IRA.

“After the age 70 1/2, you’re mandated by the federal government to take a Required Mandatory Distribution out of your IRA account, a certain percentage each year, and it increases as you age,” Hill explained. “It would be counted as taxable income if I deposited the yearly distributions or I can make QCD’s, which transfers money directly from the IRA to LC. Using this approach, we do not pay taxes on the distribution because we don’t actually receive the money.”

Most recently, the Hills worked with the Louisiana Baptist Foundation and established a charitable gift annuity with LC as the beneficiary.

Jeff Steed, the executive director of the Louisiana Baptist Foundation, said gifts like the Hills’s provide a two-fold benefit.

“Don and Terry Hill have established a charitable gift annuity that will provide retirement income to them and then benefit the tremendous work of Louisiana College to advance the cause of Christ by impacting the lives of many students,” Steed said.

Brewer was thankful for the generosity and support from the Hills, who, he said, continuously put their money where their hearts are as Christians.

“Don and Terry Hill continue to lead the way for Louisiana College with support for Christian higher education now and into the future through this giving initiative,” Brewer shared. “May their charitable gift annuity inspire scores of other Alums of the College to do the same — the value associated with ensuring a Christ-centered education for future generations is inestimable.”

Hill was honored in the fall of 2015 as a Louisiana College Distinguished Alumni. The plaque hangs in their living room in Dallas, Terry Hill said, adding that she is very proud of her husband of 53 years and believes LC played a big part in his early life.

“I see how he’s turned out in business and in his personal life. LC is doing a great job. I am a little prejudiced,” she said jokingly. “He’s a good man. He’s smart. I’m smarter, but he is pretty smart.”

“Seriously,” she added, “His going to LC and the atmosphere there was good for him, and that’s been a blessing to both of us.”

After all these years together, the Hills are still playful. Don Hill refers to his wife as his soulmate, hinting at their one mind, spiritually and financially.

“I’ve been very blessed with intellect and with everything I’ve tried to do,” he said. “God has blessed me. I have received nice compensation, and I’ve never forgotten the value of my four years at LC.”

Hill said he has tried to give back to the place that gave him his career start ever since he got his first real job—beginning with $1,000 annually to what was then called the President’s Club. Once Brewer became president in 2015, and Hill saw the direction LC was going, he began to give in earnest.

Hill recounted Brewer’s request during a breakfast meeting in Dallas in which the college president told him the Student Government Association had made a request for additional campus lighting to improve safety on campus.

“When he said SGA—I was president of SGA back then—I said ‘OK,’” Hill said.

He discussed it with his wife and told Brewer they would provide $50,000 for lighting and landscaping on campus.”

“Dr. Brewer’s quite persuasive,” Hill said with a smile. “Seriously, though, we did hit it off from the first time we met. My wife liked him, and she doesn’t necessarily like all the people I meet.”

Terry Hill is completely supportive of her husband’s philanthropic choices.

“Louisiana College is a good school,” she said sweetly. “It did a very good job with my husband. If God helps you, and you can help other people, that’s a good thing. It’s your responsibility to give back when you can.”

The Hills have also provided funding at LC for refurbishment of the restrooms in the H.O. West Lobby and the Athletic Facilities Campaign. They donated additional money for the computer science classroom in Cavanaugh Hall.

Don Hill, who furthered his education, earning a master’s degree on a fellowship to Florida State University thanks to the encouragement and support of an LC professor, emphasized that the value of his time in college cannot be overestimated.

“Going to LC was the most important four-year period of my whole life,” he emphasized, encouraging students to take advantage of the small class sizes, the involvement of professors and the extra curriculum activities LC offers — because it makes a huge difference in the long run.

Hill has worked all over the country—beginning as a statistician for the federal government for the Public Health Service, then for IBM and ultimately becoming executive vice president of a national credit bureau as well as president of a bankruptcy services company.

“It was here at LC that my intellect was sharpened, my faith deepened, my leadership capabilities expanded, and my social skills enhanced,” Hill said. It gave a lot to me, and I’m still trying to repay. I still have a long way to go.”

By Stewart Holloway PINEVILLE, La. - I’ve heard people say, “If that doesn’t light your fire, your wood is wet.” I would say that about yesterday. It’s been a while since I had a 15 1/2 hour Sunday and was so jazzed when I got home that it was hard to come down. But yesterday was that. First, we had baptisms … END_OF_DOCUMENT_TOKEN_TO_BE_REPLACED