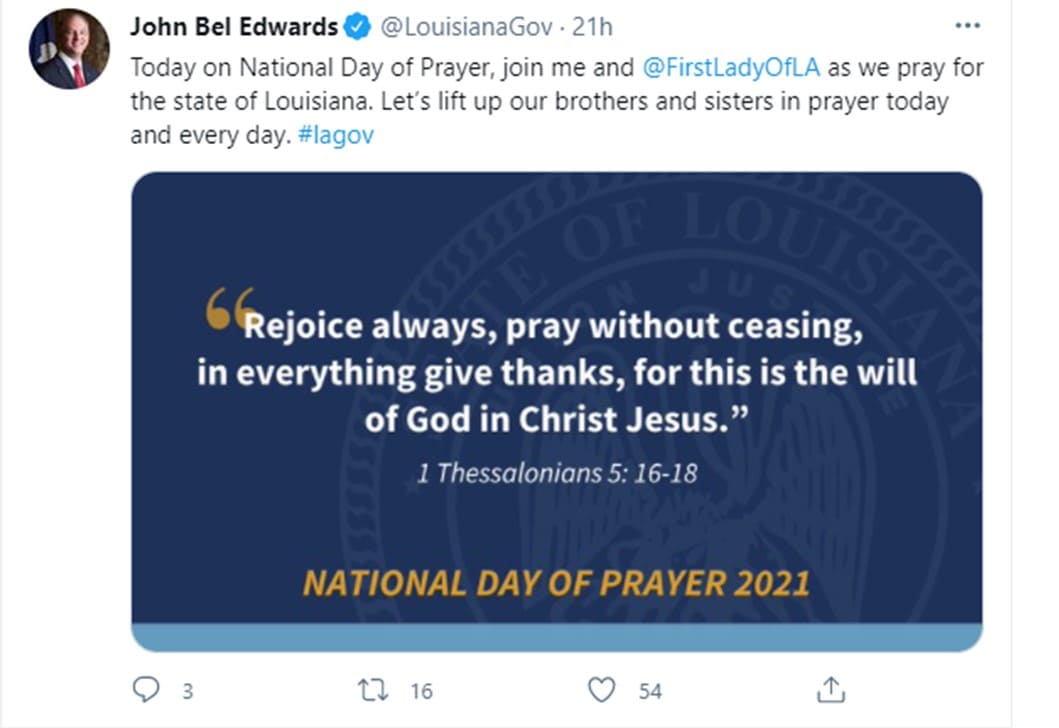 BATON ROUGE, La. (LBM) – Three Louisiana Baptists were among 10 pastors and other leaders from multiple denominations around the state who led prayers during a special call with Gov. John Bel Edwards on Thursday, May 6.

Held on the annual National Day of Prayer through Zoom, Edwards and others prayed for children, teachers, health care and other essential workers; those impacted by a Seacor lift boat that capsized April 13; state and local leaders, including Edwards and his family; Louisianans hurt by the pandemic, hurricanes and winter storms last year; and President Joe Biden and his traveling party as they visited Lake Charles and New Orleans on Thursday.

“The National Day of Prayer is a pretty simple recognition that God is in control and we are not,” Edwards said during the opening prayer. “And no matter our station in life, whether you are governor in the sixth year or a pastor, the higher your station in life, the more dependent you are, that I am, that we are, on God.

“And I think we know that sometimes (our prayers) match with His plan and sometimes they don’t,” he continued. “But when they don’t, it’s because His plan is perfect and our prayers are not. That should reinforce the need for prayer.”

Louisiana Baptist Executive Director Steve Horn led a prayer for survivors and families whose loved ones died after a Seaport Power lift boat capsized south of Port Fourchon. Six people were rescued, six bodies have been recovered and seven people remained missing, according to the U.S. Coast Guard.

“Our state has been ravaged with so much catastrophe, with COVID-19, with hurricanes and now with this awful tragedy on our coast,” Horn prayed. “Oh God we pray in the best way that we know how that you would bring comfort to each one who has been impacted.”

Horn, citing Psalm 139:8-10, said God is present and sends the Holy Spirit to intervene when His children do not know how to pray in certain circumstances.

In his prayer, Reggie Bridges, pastor of Temple Baptist Church in Ruston, asked God to grant legislators integrity, give them wisdom and bring about unity in the state.

“Even now as they work through bills and legislation, Lord, they are so dependent on you and the wisdom that you give them,” he said. “We know that even Moses said to his people that the statutes, that the laws that would be accomplished through your leadership, would amaze the other nations that were around and the other nations would know that you were near to them. And Father I pray what comes out of this session, what is passed, because of the wisdom that you give, would just astound those around us. Even the other states would look and know that God was near to us.

In his prayer, Waylon Bailey, pastor of First Baptist Church in Covington, asked God to guide local leaders in their decision-making.

“We pray for their energy and their strength, knowing that many of them not only are serving just in this capacity but are taking care of their families and working full time in other ways to make a living,” he continued. “So, we would pray that you bless them. We pray that you would bless their families who have sacrificed to make it possible for them to serve.”

By Rebecca Holloway PINEVILLE, La. – For years, I have read and heard the statement, “We need to hold life/our family/our possessions with an open hand.” The idea is that we are not in control of our lives or anything else on this planet. God is in complete control of all things and has the power and right to … END_OF_DOCUMENT_TOKEN_TO_BE_REPLACED