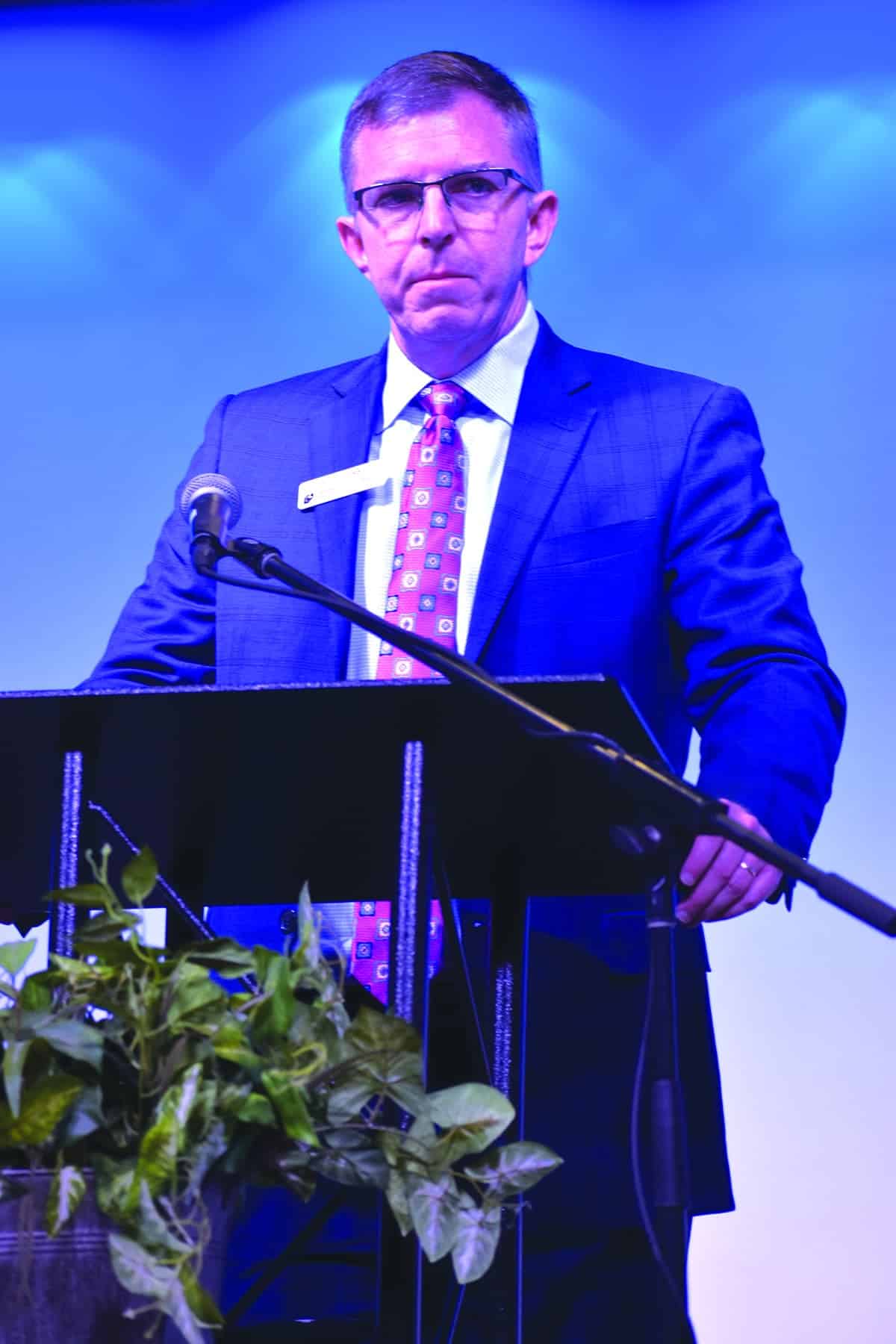 Louisiana Baptists Executive Director Steve Horn announced Sept. 29 at the Executive Board meeting that the 2020 Annual Meeting would be held at Louisiana College’s Guinn Auditorium.

WOODWORTH, La. (LBM) –The site for the Louisiana Baptist Convention annual meeting in 2020 has been changed to Guinn Auditorium on the campus of Louisiana College in Pineville, the LBC Executive Board announced during its Sept. 29 business meeting.

The meeting at will be held Nov. 10 from 12:45 to 5 p.m. and will not include exhibits or auxiliary meetings such as seminary luncheons. The Pastors’ Conference also will not take place.

Originally, Franklin Avenue Baptist Church in New Orleans was named the host, but on June 30 the decision was made to change the venue due possible attendance restrictions in the city relating to the COVID-19 pandemic.

“The reason that we are recommending this is because this allows our messengers from most any point in the state to drive to Pineville in the morning, attend the meeting, and return home that evening if they would choose to do so,” Louisiana Baptist Executive Director Steve Horn told board members at Tall Timbers Baptist Conference Center in Woodworth. “The annual meeting at Louisiana College at Guinn Auditorium also allows for us to have maximum social distancing guidelines that are important for us to maintain during this time.”

Additionally, Executive Board members suspended the conservative budget process and the CP Advance Plan for the 2021 budget.

“The conservative budget process sets the parameters for the next fiscal year’s Cooperative Program allocation budget,” Horn explained. “Relating to the 2021 budget, whatever was received from Aug. 1, 2019 through July 31, 2020 becomes the budget cap for 2021. Since receipts have been adversely affected by the economic effects of the pandemic, it would have resulted in over $800,000 in reductions. The motion suspends that process for one year and allows each entity to manage its cash flow accordingly using the same budget approved the by messengers at the 2019 Annual Meeting.

“The CP Advance Plan provides a 50/50 split between the LBC/SBC with receipts that exceed the budget,” he continued. “Due to the economics of 2020 combined with the hopes of a rebound in 2021, proceeding with this plan could have an adverse effect on Louisiana Baptists’ missions and ministries.”

Newly elected Louisiana Baptist Foundation Executive Director Jeff Steed previewed the Foundation’s vision for the future. Through the LBF Vision 200 strategic plan, the entity hopes to further partner alongside churches, other ministries and individuals to advance the Kingdom by $200 million over the next 20 years. Steed will share additional details at the Foundation’s October board meeting.

Will Hall, executive editor of the Baptist Message and director of the Office of Public Policy, said while COVID-19 resulted in a three-month temporary suspension of the print publication, the news outlet still covered the pandemic, Southern Baptists’ response to relief efforts with Hurricane Laura and other SBC issues.

Meanwhile, Hall said the Office of Public Policy was successful in renewing task forces in the legislature to fight childhood exposure to pornography and to reduce the divorce rate in the state. He also mentioned success in passing a bill to expand broadband Internet into rural areas (giving churches in these underserved areas access to social media in reaching their communities) and another piece of legislation that limits liability for churches and non-profits if in trying to prevent sexual assaults they show good faith in reporting to future employers about concerns regarding a former employee’s suspected sexual misconduct. Finally, Hall urged executive board members to promote the Love Life Amendment (vote YES on #1), which if approved by voters Nov. 3 would prevent a rogue state judge from overturning pro-life laws in the state.

In his report, Perry Hancock, CEO and President of the Louisiana Baptist Children’s Home and Family Ministries, said the entity served more than 2,200 children and families in need last year. Through the Children’s Home, many accepted Christ, including nine youngsters who are residents of a children’s village the ministry sponsors in Haiti. Hancock added that a new cottage for homeless women and their children opened earlier this year in Monroe and the campus has started construction on a new recreational center and pool that is scheduled for a 2021 completion.

Louisiana College President Rick Brewer explained the college has unveiled a new organizational structure and created a new mission statement for the school. He said LC will bring before the messengers at the 2020 LBC Annual Meeting a change that will reduce the size of its board from 33 to 21. The change would not take place immediately but would be phased in over a five-year period.

By Rebecca Holloway PINEVILLE, La. – For years, I have read and heard the statement, “We need to hold life/our family/our possessions with an open hand.” The idea is that we are not in control of our lives or anything else on this planet. God is in complete control of all things and has the power and right to … END_OF_DOCUMENT_TOKEN_TO_BE_REPLACED