We had a great work day today at all three areas — 50 bags of material were pulled from the water system and the two above ground locations continued to carefully excavate.

At this mid-point of the dig, everyone is equal parts excited, exhausted, and home sick. We still have much to do before we leave and many questions are left that we hope to answer … in the coming week and in the next few years.

For those of you who are not acquainted with the history of Gezer and the history of the site’s archaeology, below is a portion of last year’s report regarding the dig.

Added evidence that an ancient water system at Tel Gezer in Israel could be the product of Middle Bronze Age Canaanites living between the time of Abraham and the Israelite conquest was uncovered by New Orleans Baptist Theological Seminary’s archaeology team during a challenging dig season in the summer of 2015.

The Bible provides one tantalizing possible parallel to the Gezer system in the accounts of King David. In 2 Samuel 5:6-9, David’s men utilized a “water shaft” to invade and conquer the fortress of Zion/Jerusalem. This rock-hewn system has been located in Jerusalem’s “City of David” area.

Visitors can walk the entire length of that Canaanite system.

Based on all the available data, Dan Warner, co-director of the NOBTS Gezer dig, believes the City of David tunnel and the Gezer system are both products of the Middle Bronze Age.

The Gezer water system excavation is a joint project of the Moskau Institute for Archaeology at NOBTS and the Israel Nature and Parks Authority (INPA). The dig is co-directed by Dan Warner, an NOBTS professor, and INPA chief archaeologist Tsvika Tsuk. 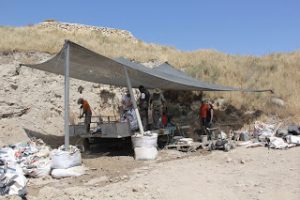 The Big Sifter for the tunnel dirt.

Jim Parker, NOBTS professor and executive director of the Moskau Institute, and Dennis Cole, professor and chairman of the division of biblical studies, also provide leadership for the three-week dig.

Warner estimates that the Canaanites built the water system during the height of Gezer’s prominence as a Canaanite city-state. Though this would place construction approximately 600-700 years before the Israelite conquest of Canaan, the water system can shed light on the Canaanite people and their culture — a culture which plays a formidable role in the Old Testament.

Canaanite Gezer is mentioned multiple times in the Israelite conquest narrative recorded in the Old Testament book of Joshua. The most notable mention occurs in Joshua 10:33. When Joshua and his men attacked Lachish, approximately 20 miles south of Gezer, the army of Gezer came to that city’s aid. The Israelites defeated Lachish and the army of Gezer, killing King Horam of Gezer.

Another important reference to Canaanite Gezer is connected to the Israelite failure to take the entire land that God had given them. In Joshua 16:10, the biblical author notes that the Israelites “did not dislodge the Canaanites living in Gezer.” And though the Israelites set aside Gezer as a “city of refuge,” the Bible indicates that the Canaanites controlled Gezer until the time of Solomon when they were finally defeated by an Egyptian pharaoh (1 Kings 9:15-17).

The Canaanites had experienced a time of cultural decline in the years before the conquest but were still a frightening foe with heavily fortified cities. The water system, along with the massive defensive walls and gate, illustrate an advanced society with great technical know-how, significant engineering skills and a desire to build things on a large scale, Warner said.

The massive rock-hewn water system was created with flint and bronze tools as early as 2000 B.C, Warner noted. Already the largest known of its type, evidence suggests the Gezer system may be one of the oldest.

“We know of nothing this massive from the Middle Bronze Age anywhere in the Ancient Near East,” Warner said. “This system fits well with other [Canaanite] features in close proximity: to the south the massive gate and stone tower and to the northeast the large standing stones.” 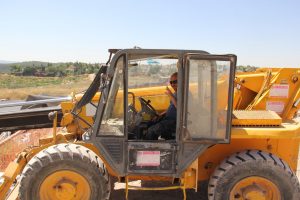 The ancient water system, which provided a water source inside the walls of Gezer, consists of at least three parts: a keyhole-shaped entrance, a long diagonal shaft and a basin to collect water which may extend into a cavern located just beyond the basin.

The massive water system measures 12 feet wide and 24 feet high at its opening, stretching 130 feet into the ground at a 38-degree slope. For the past six years, a team of archaeologists and volunteers has been investigating the site in an effort to determine who constructed the ancient water system and when it was constructed.

This discovery led the dig leaders and Eli Yanni, who serves as the dig’s pottery expert, to speculate that the tunnel may have been used as a pottery dump after it was no longer used as water source. Why it ceased use as a water system remains a point of speculation.

In the Middle Bronze Age, Gezer grew from a small village into a heavily fortified city-state. The Canaanites built high stone walls, massive towers and a mud-brick gate system to protect the city. According to Warner, the city met a violent end, most likely at the hands of Pharaoh Thutmose III, who lists Gezer as a conquered city on the walls of the Karnack temple.

King Solomon launched another construction boom in the Iron Age 1,000 years later. Solomon rebuilt and fortified Gezer and strengthened the defenses at Hazor, Jerusalem and Megiddo (1 Kings 9:15-17). Because of the dating of water systems at Hazor and Megiddo, many archaeologists argue that the Gezer water system was constructed after Solomon, during the reign of Ahab.

When Irish archaeologist R.A.S. Macalister excavated the system from 1906-08, he attributed it to Middle Bronze Age Canaanites. However, his primitive archaeology methods along with persistent theories about the systems in Hazor and Megiddo led many to dismiss his claims about the Gezer system.

Recent evidence suggests that the Megiddo system also is a product of Middle Bronze Age Canaanites, providing additional evidence for an early dating of the Gezer system.

Shortly after Macalister’s excavation at Gezer, a retaining wall collapsed and refilled the water system with dirt rocks and debris. It remained untouched for 102 years. 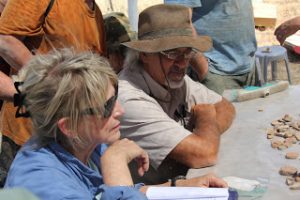 Dr. Warner and Lyn Pruitt working on pottery and artifacts.

During his dig, Macalister laid a “causeway” of stones across the muddy basin to reach the cavern. While the causeway helped Macalister’s team reach the cavern, it also protected materials resting in the basin from contamination following the retaining wall’s 1908 collapse.

The NOBTS/INPA team discovered Macalister’s causeway during the 2012 dig season. For the past four seasons, the team has been removing datable pottery samples from the area Macalister left untouched.

How the Canaanites could build such a system remains a mystery. Many have attributed the system to outside influences such as the Minoans, Egyptians or Mesopotamians.

But the Middle Bronze Age dating removes that option. Warner maintains the possibility that the Canaanites developed the technology.