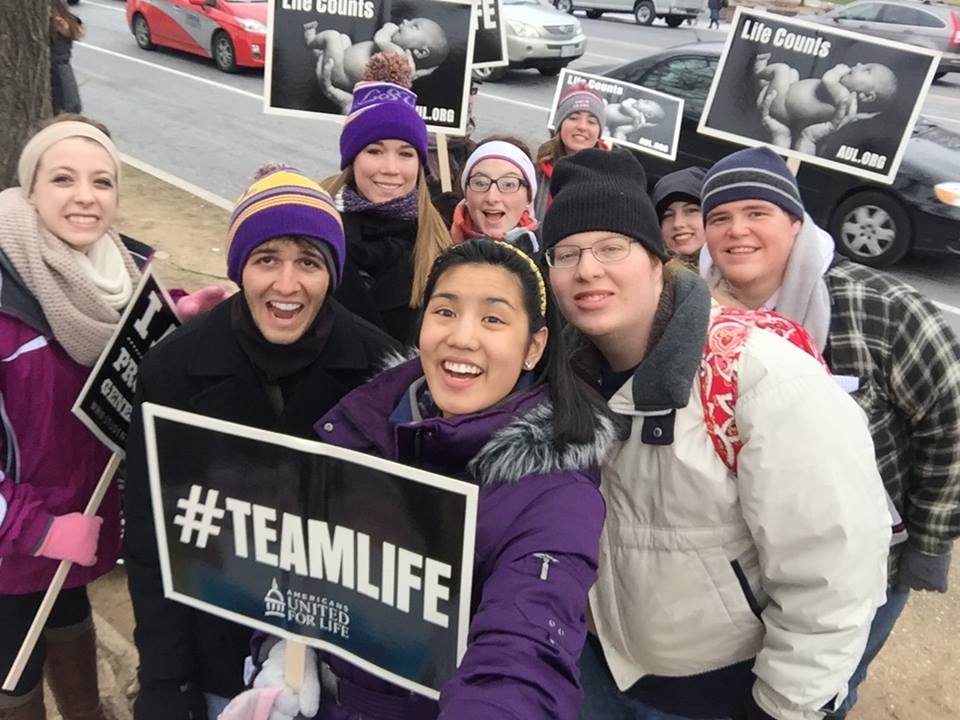 A group of students from the University of Louisiana-Lafayette participate in the 2016 National Life March in Washington, D.C. More than 2,000 Louisianians are expected to participate in this year's march, scheduled for Jan. 28. Krista Corbello photo.

WASHINGTON,  D.C. – More than 2,000 Louisianians are expected to be among those from across the nation participating in the annual March for Life this Friday, Jan 27.

Held since the first anniversary of Roe v. Wade – a case that legalized abortion in the U.S. – the march will begin at noon EST. The event will also include a rally featuring such speakers as Kellyanne Conway, senior counsel to President Trump; Benjamin Watson, former New Orleans Saint and current Baltimore Raven; Abby Johnson, former Planned Parenthood director; and Cardinal Timothy Dolan of New York City.

Benjamin Clapper, executive director of Louisiana Right to Life, is in D.C. and is hopeful eventually abortion will become a thing of the past.

“We are excited that more and more young Louisianians continue to stand for human rights for all, born and unborn,” Clapper said. “We also march with a renewed sense of hope that we can end tax-payer funding of abortion, defund the abortion industry, and place pro-life justices on the Supreme Court.  The pro-life movement will continue to march until legal protection is assured for the weakest among us, the unborn child.”

For more information about the march and how to watch the event online, visit http://marchforlife.org/mfl-2017/.

By John Hebert, Louisiana Baptist missions and ministry team leader ALEXANDRIA, LA. (LBM)--Do you know what Winston Churchill, Bill Gates, Walt Disney, and Colonel Sanders have in common? It has nothing to do with their fame or notoriety, I would suggest. Instead, it is the trait that I contend was the cause of … END_OF_DOCUMENT_TOKEN_TO_BE_REPLACED