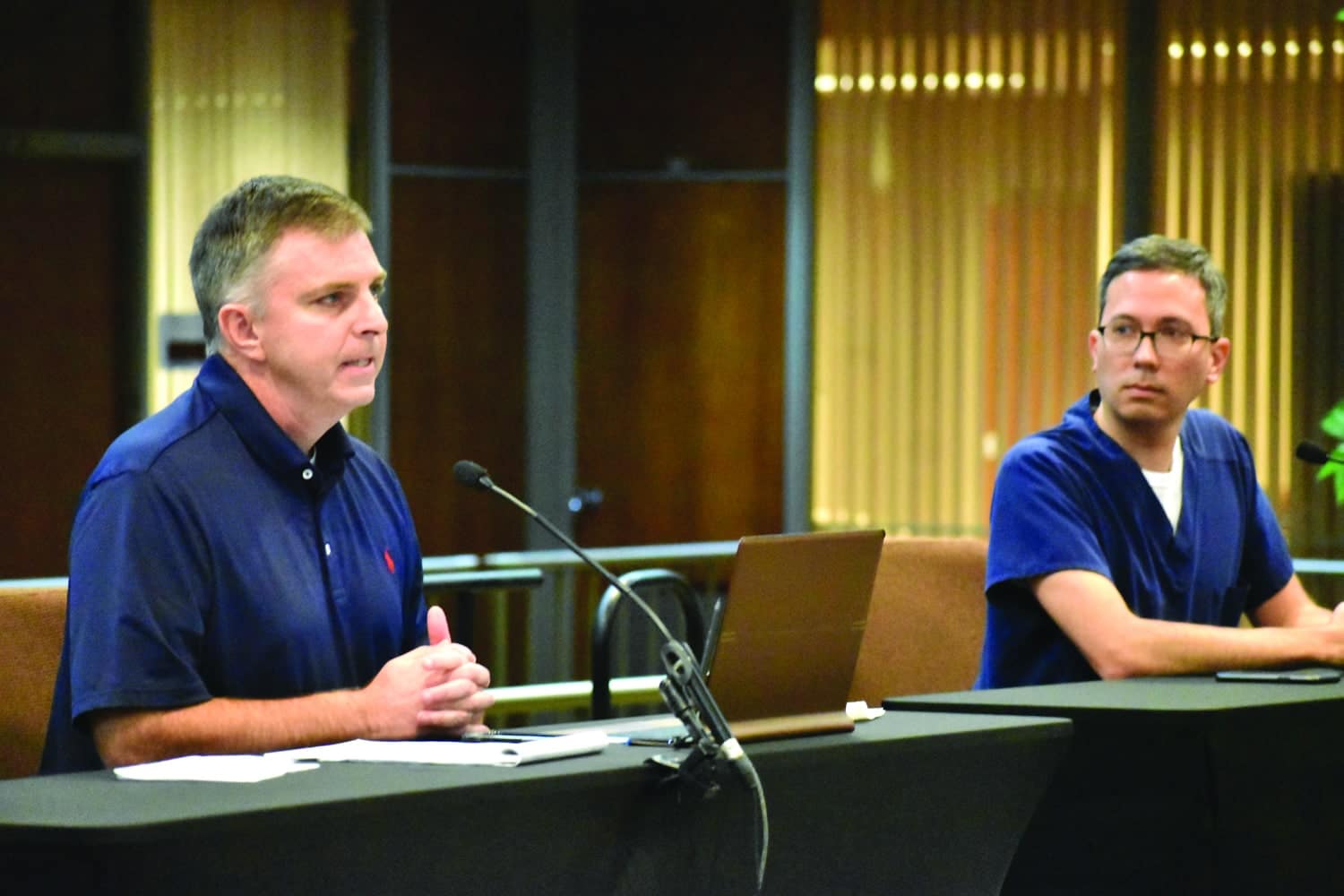 ALEXANDRIA, La. (LBM) – Frank Courmier, a pulmonologist at Our Lady of Lourdes Regional Medical Center in Lafayette, appealed to Louisiana Baptist state missions staff, July 20, urging them to receive the COVID-19 vaccine and to advocate for vaccinations among Louisiana Baptists.

Courmier, who conducted virus bioengineering research at M.D. Anderson in Houston, Texas, is chair of a regional coronavirus task force that encompasses the parishes surrounding Lafayette, and he is a member of the state task force on COVID-19.

He addressed key issues, and answered questions and concerns raised by individuals gathered at the Louisiana Baptist Building and from online participants, citing an urgency in getting out his message because of a fourth surge his hospital is facing. A 10-day increase from nine to 40 COVID, mostly unvaccinated patients, has caused the hospital to “scramble one more time to accommodate the influx of patients,” he said.

“I am tired of the death and destruction that this is causing, and I have to do something,” Courmier shared. “And so, rather than sitting and going through another fourth surge I have asked permission and have been granted to go across the state trying to convince people that the vaccine is the right thing to do.

“I make no bones about why I am here,” he continued. “I need your help. Some of the most unvaccinated groups are in our own communities, within our churches, who are adamantly opposed to this.”

Courmier said there is no data to suggest long-term effects will result from vaccination, and he explained that the reason vaccines need special refrigeration was that drug companies took extra efforts to omit preservatives and other stabilizing ingredients that have caused concerns among various groups in the past.

“When the first vaccine came out, there was an almost immediate pushback because of the already debunked idea of certain ingredients causing autism.”

He said scientists were so sensitive about such anti-vaccination responses that they took special care in formulating the vaccines.

“There is absolutely nothing in there that can even potentially harm you,” he said.

Courmier said that obviously there is no data on which to assess the long-term effects, but he pointed to the extended records of other vaccines to state there was no likely potential for the vaccine to create health problems later in life.

“We can’t know, and that’s kind of an issue,” he conceded. “But what vaccine, that has been created so far, has long-term effects? In other words … when we take a tetanus shot or MMR [measles, mumps, rubella vaccine] … 50 years later you have a heart attack, are we going to say that was attributed to the MMR?”

He added that most physicians and scientists believe that if you are going to have an adverse reaction to any vaccination, it will happen in the first four weeks after having taken that shot.

Courmier responded to a question about the low mortality rate of COVID-19, 1.8 percent (meaning a 98.2 percent survivability), and why vaccinations are needed at all.

“Assuming no vaccinations, with 1.8 percent mortality, that’s 5 million Americans dead,” he said, pointing out “that’s more than the [population] of the entire state of Louisiana.”

The benefit of all three vaccines exceeds the risk, Courmier told the group.

“However, if you have a choice, and most people do, I would not choose the J&J” [Johnson & Johnson vaccine], he offered, citing a 1 in 750,000 chance of a blood clot. But he also emphasized that “you are much, much, much, much more likely to get a blood clot from some of the other medications that we take.”

The Pfizer and Moderna vaccines were produced without use of federal human fetal stem cell lines (two lines were developed from aborted babies, one in 1972 and another in 1985). However, some safety testing of these two vaccines used the tissue cloned from these aborted babies. Johnson & Johnson, on the other hand, used the cloned tissue in the design and development, production, and testing of its vaccine.

“We’re not promoting abortion. We’re not precipitating more abortions for the purposes of research,” Courmier said.

“We have the issue of using something bad and creating something that’s saving a whole lot of lives,” he said. “In some sense, redeeming that abortion.”

Courmier took questions about vaccinated people getting infected by new COVID-19 variants and vaccinations for people who have the antibodies from having recovered from the virus.

“So far, even if you get infected with the vaccine, most people don’t require hospitalization,” he said, remarking that symptoms are less severe for people who have been vaccinated and get infected with COVID-19.

Additionally, the vaccine “protects you against repeated infections,” he said.

Similarly, Courmier said those who have the antibodies from having recovered from COVID-19 are better protected by being vaccinated. He described the advantage as “an obvious, and much more robust antibody production when you are infected and then you get the vaccine, than infected alone.”

Courmier said the vaccines do not affect the fertility of women and that it is “scientifically impossible” for the vaccines to alter DNA, in response to questions about the vaccine’s impact on college-age adults.

He further commented about the upcoming academic year and vaccinations for adolescents (12-year-olds, plus, were approved for vaccinations in May).

“I have very strong recommendations and encouragements that adults get the vaccines,” Courmier stated. Although he does advocate for 12-17-year-olds to get the vaccinations, he said “it’s not as strong” an endorsement.

“I think if every adult got it, you could achieve a sufficient herd immunity that the children would get colds and they would get over it and you would be fine,” he said. “But we can’t do that. I don’t think it’s going to happen. I would like to think it would, but the reality is it’s probably not.

“So, we are going to have to figure about another way to achieve herd immunity and part of the way is to vaccinate our children so that when they go to grandparents that aren’t vaccinated, they will stay safe,” he reasoned. “And they go back to their homes with parents that don’t want to vaccinate, they stay safe. And neighbors stay safe and so forth. I do advocate for it.”

Courmier said the context for making his personal appeal to Christians around the state was that “we are the people that embrace truth. I just want to make sure that you understand that if you say no to the vaccine, I am okay with that — as long as you are saying ‘no’ for the right reasons. If you are saying ‘no’ because of all the false and wrong reasons, that is horrible to me. At least make an informed reason and that is why I am here today.”

In his closing remarks, Louisiana Baptist Executive Director Steve Horn encouraged others to get the vaccine.

“For what it’s worth to my staff, I hope you will think incredibly seriously about getting the vaccination for all the reasons stated today,” he said. “I have a 10-year-old that can’t get the shot and I want him to be as safe as possible.

“And also, my argument would be, I just have come to believe it’s the right thing to do,” Horn said. “You have to make up your mind, but I agree what with Dr. Courmier has said. If you come at it a different way, at least come at it from a situation that is based on things that are true, not on things that are rhetoric or fiction.”

By Mark Devine As the dust settles from the annual meetings of two major evangelical denominations, the contrast between them could hardly be more stark. Courage won the day among those gathered for the PCA. Fears of elitists won out among the messengers to the SBC. ... READ MORE … END_OF_DOCUMENT_TOKEN_TO_BE_REPLACED