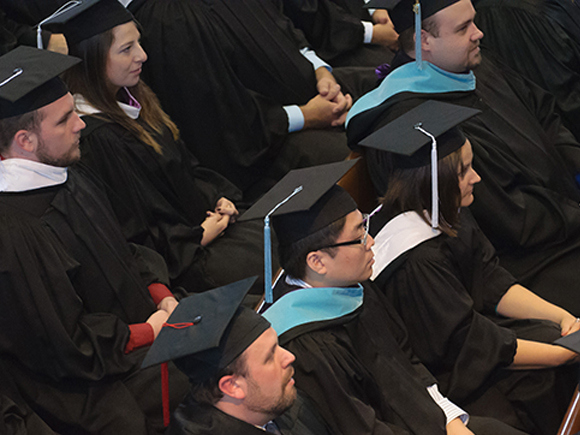 Speaking to a class of 224 candidates, Kelley began his charge by noting that some members would soon be going into places too dangerous to name publicly.

“This is a day of great joy but also a day of sobering reality,” Kelley said. He noted the importance of the day “because of what we see in the world around us.”

Kelley explained that the course of history is marked by pivotal, epic-making moments. Kelley pointed to the Battle of the Bulge in WWII where German forces broke through the Allied line but were held back by American paratroopers long enough to allow Gen. George S. Patton, Jr. to reposition his tanks, and ultimately secure victory.

“It was an epic moment,” Kelley said. “That’s what happened when Jesus came into the world.”

‘God with us’ matters because nothing can come against the believer committed to God, Kelley said. There are no dead ends where God leads, he explained.

“‘God with us’ changes everything,” Kelley said.

Shepherds on the hillside the night Jesus was born never knew how dark the night was until “heaven’s light” came bursting forth, Kelley said, and at that moment, the shepherds could truly see.

Kelley challenged graduates to carry the light of the Gospel wherever they go.

‘You are bearers of that heavenly light … you are penetrators of that darkness. In the midst of the ordinary, you bring heaven’s light,” Kelley said.

Steve Lemke, NOBTS provost, presented the class for the conferral of degrees and noted, “This class alone will impact the lives of thousands of people around the world for Christ.”

The professional graduate certificate was awarded posthumously to Jeffrey Wayne Ingram, 58, who was studying in the doctor of ministry program at the time of his death. Ingram died Aug. 26 after a brief battle with cancer. He was associate pastor and senior adult minister at First Baptist Church, Fairhope, Ala., at the time of his death. In presenting the award, Kelley said to the family, “We celebrate your courage and your love.”

The biblical teaching certificate was awarded to 49 awardees, including a first of a father, mother and daughter receiving the certificate together.

By Lane Corley MADISONVILLE, La. - In Luke 15, Jesus gives us a glimpse of the Father’s heart for the lost. 1. Those far from God liked Jesus and he liked them (verse 1). Is that true of me? When was the last time someone far from God approached me? Am I available to them? Building relationships with … END_OF_DOCUMENT_TOKEN_TO_BE_REPLACED