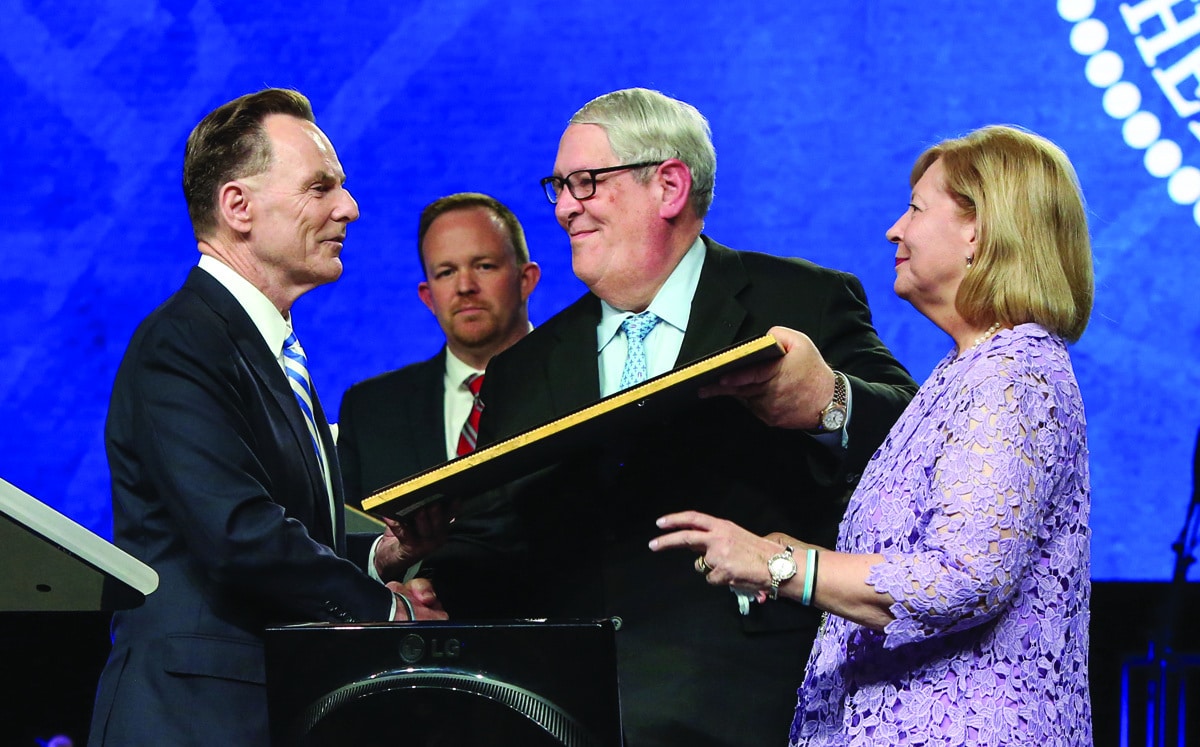 BIRMINGHAM, Alabama – Chuck Kelley, in his final New Orleans Baptist Theological Seminary report to messengers, thanked Southern Baptists for their investment in the institution he served during his 23-year tenure as president.

He also voiced gratitude for Southern Baptists’ support through the Cooperative Program, the primary funding channel for SBC cooperative missions and ministries, noting that $172,751,343 has been given to the seminary via this funding mainstay during his time there.

“We want to thank you for that and say, ‘Please keep on sacrificing, keep on sending, keep on supporting the preparation of your next generation of ministers,’” Kelley said. “All of us want to see our students graduate without student debt and you can make that possible.”

Kelley said the seminary has seen a small increase in enrollment this year, and that $2 million has been given to the seminary’s student scholarship endowment since January. He referenced two scholarship programs that have helped students further the Gospel: the Fred Luter Scholarship has provided, since 2011, more than $1 million in scholarships to African-American students in Atlanta and New Orleans; and, the Caskey Center has awarded annual scholarships, since 2015, for 300 bi-vocational pastors and pastors of smaller congregations, memberships of 250 or less in Louisiana and 150 or less in Alabama and Mississippi.

“So many times they tell us they thought they never would be able to go to semi-nary had it not been for this program,” he said. “Scholarship does make a difference,” he said in making the case that scholarships make a difference in pastors getting an education.

After presenting his report, Kelley yielded the remainder of his time to Jamie Dew, who was elected president of NOBTS on June 5. Dew told messengers that while he enjoyed his time as a teacher, mentor and dean at Southeastern Baptist Theological Seminary in Wake Forest, North Carolina, he has “fallen in love” with NOBTS and New Orleans in a short time.

“I had written a very cute, beautiful story for my life, but through this process I have remembered that God has the right to rewrite our stories and that He writes more beautiful stories than we do,” Dew said. “God took something from me that I deeply loved – my college at Southeastern – and He put in my hands and my heart New Orleans Baptist Theological Seminary.”

Dew said the seminary will prioritize preaching and the proclamation of the Gospel, and, will strive to teach and embody a servant attitude.

“We must be a people who walk on our knees and keep our noses on the floor before God begging God to do a great work in us and a great work through us,” Dew said. “So at the beginning of this journey, I offer our students, our faculty, our administration, and myself to you as your servants for the century before us.”

By Joe McKeever Freely you have received; freely give. (Matthew 10:8) JACKSON, Miss. (BP) -- Dr. Watson was complimenting Sherlock Holmes on a brilliant observation no one else had noticed. "Of course," Holmes remarked. "It's what I do." Forgiveness and grace -- that's what we believers do. Here is … END_OF_DOCUMENT_TOKEN_TO_BE_REPLACED