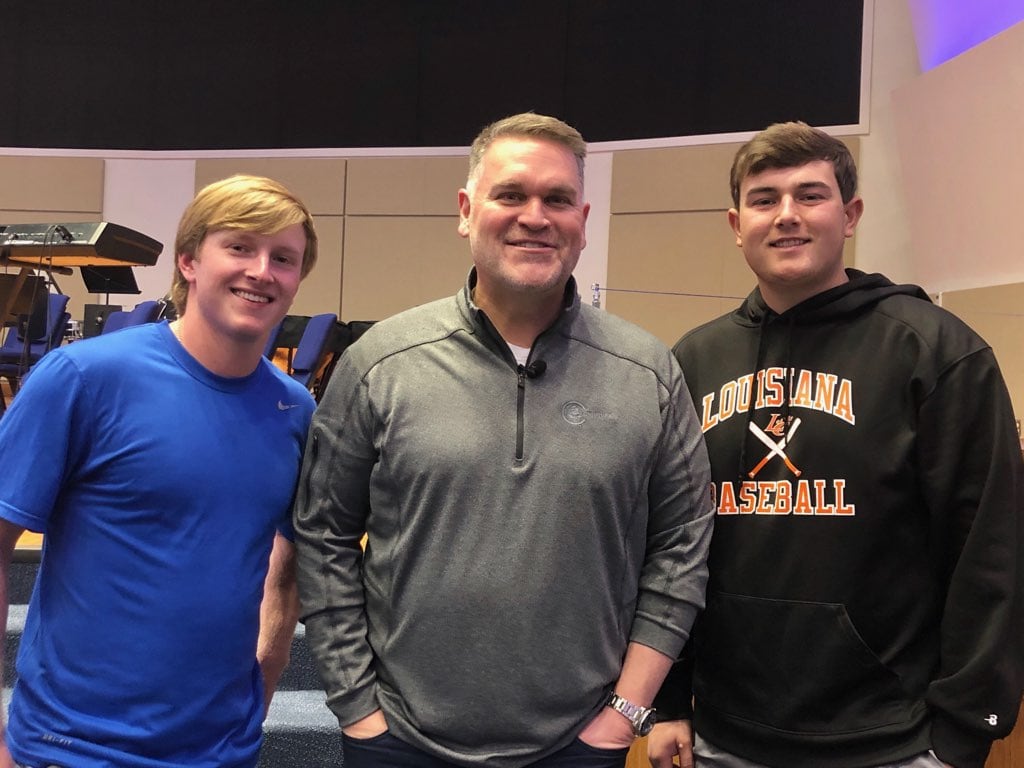 PINEVILLE, La. (LCNews)—Anyone who claims the name of Christ is called to ministry and must settle who is in control. “We must confess, ‘God is God and I am not,’” said John Fream, pastor of Cypress Baptist Church in Benton.

Continuing Louisiana College’s semester-long academic study of 1 Peter, Fream drew from 1 Peter 5:6-14 in the Feb. 26 chapel service and asked, “Who’s your boss? Who is in control and in charge of your life? It is important to be humble under the hand of God.”

“My friend John Fream preached our campus revival last Spring,” said Louisiana College President Rick Brewer. “His rapport with our students remains effective, and his sermon content is both contemporary and convicting. John has become one of our students’ favorite chapel speakers.”

In addition to submissive humility, Fream emphasized trust in “the God who spoke the galaxies into existence. That same God knows the number of hairs on your head.”

Such divine power and intimacy fosters trust, as does knowing the rest of the story. “The fix is on. Christians win in the end,” he exclaimed.

Believers are told to be “sober” in verse eight, which, in addition to the literal meaning, also means to be vigilant and watchful because spiritual warfare is real. “The enemy is out there trying to destroy you,” Fream said.

Christian have three enemies: Satan, who is a liar, lion, and killer. “But greater is he that is in me than he that is in the world.” The world is the enemy of Christians as God’s word indicates in James 4:4, saying that friendship with the world is hostility toward God. “Our third enemy is the flesh,” Fream said. “This flesh I am dragging around still gets angry, frustrated, and pulls my eyes away from Jesus. It’s a constant battle.”

Noting that athletes prefer home field advantage when competing, Fream said, “Christians do not have home field advantage in this world, the enemy does.” He said Peter was writing in a world where Roman soldiers could put a sword to a Christian’s throat a demand a denial of Christ or be murdered.

“Coming to Christ doesn’t mean we won’t have problems,” Fream said. “But it can escalate our problems; it will cause difficulties and sufferings in life.”

“We may not have to die for Christ, but we get to live for him. We are all to live for him,” Fream said, underscoring that every Christian is called to ministry.

That ministry includes telling others about Jesus. “We are gifted and have opportunities to be on mission with the Holy Spirit’s power for the sake of the Gospel.

“There will be suffering,” Fream said. “But the world needs to hear about Jesus Christ. If we don’t tell, who will?”

By Steve Horn ALEXANDRIA, (LBM)--You might be tired of hearing that we are living in unprecedented days, and, of listening to endless reports about the crisis, quarantine, social distancing, stay-at-home orders, and flattening the curve. I know I am. So, how about some good news? Our churches are … END_OF_DOCUMENT_TOKEN_TO_BE_REPLACED