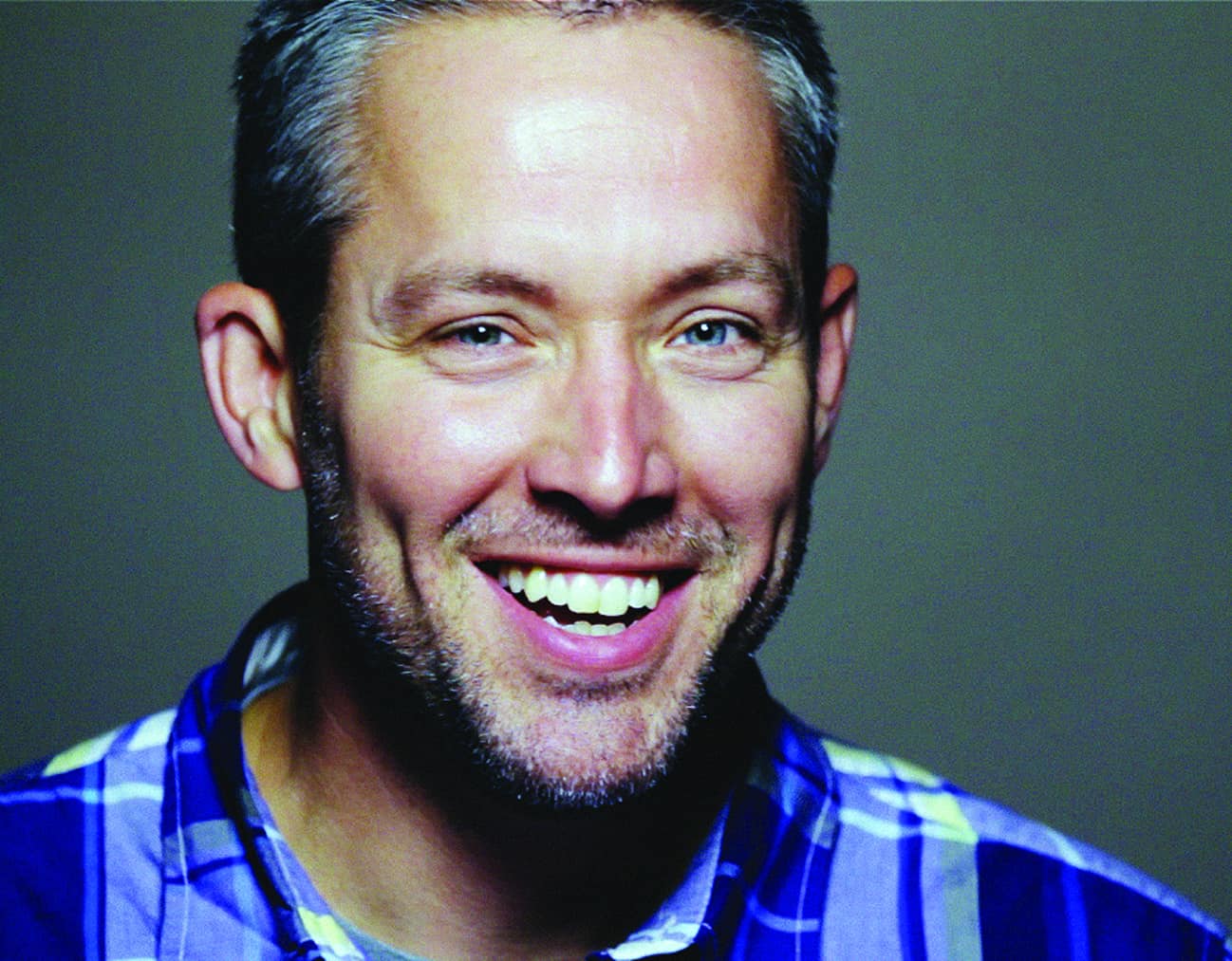 ALEXANDRIA (LBM) — J.D. Greear, pastor of The Summit Church in Durham, North Carolina, is a candidate for president of the Southern Baptist Convention for a second time.

During his lunch visit to the First Baptist Church in Bossier City Feb. 27, the Baptist Message offered to interview him live but he declined, saying he does not typically give live interviews to newspapers.

The Baptist Message subsequently learned he had granted an in-person interview the day before with the TEXAN, the newspaper of the Southern Baptists of Texas Convention.

Greear offered to allow the Baptist Message to submit questions for his consideration and reply via email. The offer was declined because the Baptist Message typically asks questions for this type of article live in order to evince an authentic response, to allow for a follow up inquiry as appropriate, and to avoid receiving an answer by committee.

However, to give voice to Greear’s position on issues important to Louisiana Baptists, the Baptist Message has researched his blogs, video interviews and other such public sources to share his own words with our readers.

Excerpt from a September 30, 2010 interview on the website of The Gospel Coalition, a network of Calvinist churches:

Question: It’s helpful to lay these misconceptions on the table and to talk honestly about our differences. You make the case that Muslims do worship the same God as Christians, although with obvious errors in understanding. Can you elaborate on how you came to this conclusion and how you would maintain major distinctions between Muslim and Christian understandings of God?

J.D. Greear: This is a tough question that has a considerable amount of complexity to it. But at the end of the day, I think the question of whether or not you use the Arabic name for God – Allah – is more of a practical question than a theological one.

Muslims claim to worship the God of Adam, Abraham and Moses. Most missionaries find it therefore helpful to use the Arabic term for God, “Allah” (meaning literally, “the Diety”), to refer to God, and to explain the God Muslims believe in, the God of the Prophets, was the God also present in bodily form in Jesus Christ and the One worshipped by Christians for the past two millennia.

You might ask, “But isn’t the Islamic God so different from the Christian God that they cannot properly be called by the same name? Aren’t we worshiping two different gods?” Believing wrong things about God and worshipping incorrectly doesn’t mean one is worshipping a different God, just that they were worshipping the one true God incorrectly.

Excerpt from a January 1, 2018, Greear blog, “Bearing the Burdens of the Broken”:

It’s simply easier to avoid thinking about things that don’t affect us. But if we’re gospel people, we will be aware of the pain others are going through. We will be aware of the privileges we experience that others don’t have. And we will use any position of privilege or strength that we enjoy to serve others. We are called to share the burdens that our brothers and sisters of color live with as if they were our own.

Excerpt from a March 19, 2018, Greear blog, “Racial Reconciliation and Cultural Diversity in the SBC”:

For those of us in the majority culture, this process has begun with a posture of listening, not talking. The definition of a blind spot, after all, is a weakness that we don’t know that we have. Historically, the most insidious blind spots result from positions of privilege and power. If we are serious about discovering these blind spots, it means committing ourselves to uncomfortable conversations where we seek more to understand that we do to be understood.

SINCE WHEN DID WE BECOME SOUTHERN BAPTIST?

Appearing before his congregation February 4, 2018, Greear offered these comments:

Well, let me address something really quickly before we actually do get started because I know that a few of you may have noticed that my name was again placed in nomination for president of the Southern Baptist Convention earlier this week.

A few months ago, several Christian leaders from around the country approached me asking me if I would be willing to do that, and after a lot of consultation with our elder team and our pastoral team and with the consent of my supervisor named Veronica, we believe that we ought to at least make the step, take the step of making ourselves available to that if that’s what God desired. The election is not until June, and it’s usually a 2-year term, but let me address three questions that just popped into some of your minds.

Question #1 is “What exactly does the Southern Baptist Convention President do?”  And, the short answer to that is probably not nearly as much as you might think.  It is a volunteer position, and basically your role is to represent the Southern Baptist Convention in terms of establishing priorities and pioneering new mission ventures, and then hopefully setting a helpful tone for engaging the culture.

Question #2 people ask is, “Is this going to take you away from the Summit Church?” And, the answer to that is a very definitive not at all. Like I said to you, it is a volunteer position, so I would continue to do everything that I’m doing here. You say, “Well does that mean you’re going to be traveling a lot?” Not really. In fact, what our elder team did is we just laid out the number of days that I was gone the last year and just said that’s the standard. I won’t be gone any more than that, and so, it will not take me away from here at all.

The third question some of you just asked is “Since when did we become Southern Baptist?” And, I get that. That’s not something we really wear on our sleeve here.

There are obviously parts of the Southern Baptist Convention that we’re not excited about, and we don’t feel like really represent who we are as a church, but I will tell you that on the whole we are very grateful to be a part of a network of churches that cooperate for the purpose of mission.

To give you just one easy example to get  your mind around: There are 158 members of the Summit Church that are serving overseas as missionaries with the International Mission Board, which is the international missions arm of the Southern Baptist Convention.  For us to pay for our members, just our members, just to pay for them overseas would cost us in excess of $6 million a year.

It doesn’t cost us really anything.

And when we give to the SBC, but it doesn’t … they are able to go freely because of the cooperative efforts of 46,000 churches across the United States. So, we are very grateful to be a part of it, and we understand that if we are going to be a part of it, it means that we oughta take some of the responsibility in helping to shape it and to point it in the directions we feel like God would have it to go.

So I’ve been very attracted to either to remain within the SBC because, in large part, the staying power of the institution when it comes to international missions.

Their theological training — I’m pretty excited about the leadership of most of ‘em right now.

Kevin Ezell at North American Mission Board is fantastic.  He is very humble and approachable.

Of course, David Platt, at the IMB.

Russell Moore is a great representative at the ERLC.

Our seminaries, you know, several of them are led by people that are just—and willing to do things differently in how they do it.

And we’ve just felt like it’s worth being a part of the conversation with them to keep it going in the right direction.

I added up, I don’t have a statistic relevant today, but last year added up the amount of money that the IMB pays for our people — just Summit people on the mission field — and that number was like $4.6 million.

That’s a lot bigger than our mission budget.

And so, you know, that’s the power of an institution.

And so, for some of the guys out here, the men and women, it’s going to be a natural partnership, and it’s gonna, you’re gonna hafta, you know, get your hands dirty a little bit.

But, there’s more good that’ll come out of it, and for some it’s not gonna make sense as the right network.

Question:  So the disadvantages, then like the difficulty of being associated with the Baptists when something comes out in the news or some Baptist pastor says something crazy on CNN or Fox News.

Greear: Right or has one of the Fox News things in his pulpit on Sunday.

Question: A Roman Catholic in his pulpit on a Sunday morning on the same week that he called Roman Catholicism a pagan blood cult.

Greear: No irony there.

Question: No irony there. What does that, what does that draw out in you and what do you do about it?

Greear: Part of it is just the dilemma of being in any large group of people.

I think very quickly after I had grown a little disillusioned with the SBC I found that every other network I started to get in there’s like, well, they got crazy uncles too in here…

And I think I’m the crazy uncle to some of these people so, you know, just sort of the nature of it that it’s that and God has always worked in, you know, these imperfect things. And, there comes a point at which hypocrisy is so bad that you can’t go on, but … .

At some point you got to make a decision that you’re gonna be with fallen people, and fallen people bring these issues, and you gotta get in there and fight.

NOTE: In the next edition, the Baptist Message will present both candidates “by the numbers.”

By Chuck Kelley Rarely does Hollywood contact a Southern Baptist seminary, but rarely is not never. One day location scouts for a major motion picture to be filmed in New Orleans called NOBTS and asked to tour the campus. They were looking for a place that with a bit of movie magic could be made to look like the … END_OF_DOCUMENT_TOKEN_TO_BE_REPLACED