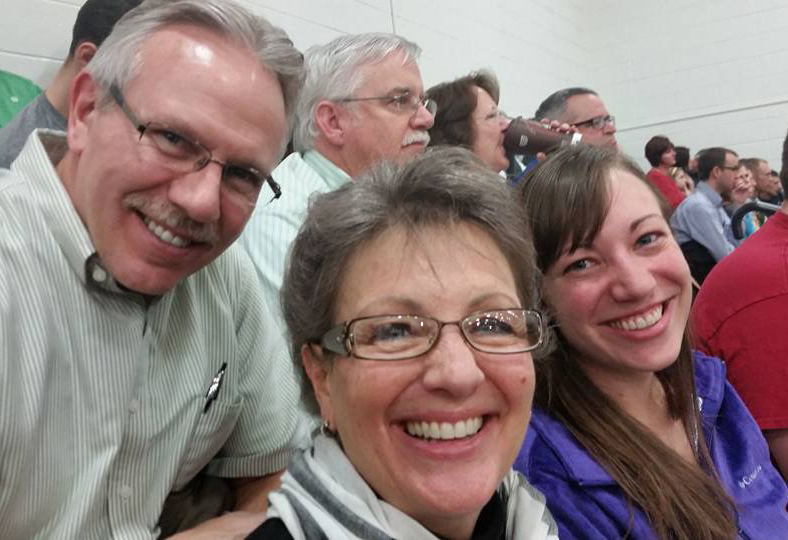 Scott and Marsha Crouthamel and their daughter Calista, all of Grace Community Church in Boone, Iowa, were among the Southern Baptists to participate in the Iowa caucuses Feb. 1. Photo courtesy of Tim Trudeau

Southern Baptists across the Hawkeye State apparently agreed with the sentiment because many, including pastors, stood for biblical principles during caucus season, campaigning for the presidential candidates they believed would best represent their values.

Iowa pastors and state convention staff members spoke for candidates at their respective caucus sites — in keeping with a unique feature of Iowa’s caucus process. Some agreed to serve as delegates to Republican county conventions — another unique feature of Iowa’s process. And at least two Southern Baptist churches allowed their buildings to be used as caucus sites — one Democratic and one Republican.

“Iowa Southern Baptists are engaged and involved,” said Stiles, pastor of First Family Church in Ankeny, Iowa. “They’re part of that evangelical vote that affects the caucuses so much, and I’m glad about that. I’m glad we are plugged in, connected, vocal and at the same time kind and compassionate.”

National commentators said evangelical support, which included that of Southern Baptists, was a key factor in propelling Texas Sen. Ted Cruz to victory in the Feb. 1 Republican caucuses. In the Democratic Party, former Secretary of State Hillary Clinton apparently edged Vermont Sen. Bernie Sanders in a race where each garnered roughly 50 percent of the available “delegate equivalents” — Iowa Democrats’ method of counting support for each candidate.

‘Impact our culture for righteousness’

Stiles, a Republican, went to his local caucus “hoping” to support former Arkansas Gov. Mike Huckabee because he believed Huckabee had a viable strategy for overturning the Supreme Court’s Roe v. Wade abortion decision. But upon sensing Huckabee’s lack of momentum at the caucus site, Stiles caucused for Cruz, deciding a vote for the Texas senator was a more practical way to defend unborn life this election cycle.

Huckabee announced via Twitter he was suspending his campaign after receiving less than 2 percent support in the caucuses.

Stiles didn’t tell members of First Family which candidates he was considering because he feared people with different political preferences could feel inhibited from coming to him with spiritual needs.

“One of the balancing aspects of pastoring in Iowa during caucus time is helping the flock stay focused on our truest longing — God’s Kingdom come on earth as it is in heaven — while still calling them to ‘let their light shine before men’ and impact our culture for righteousness,” Stiles said.

Tim Lubinus, executive director of the Baptist Convention of Iowa, agreed that sharing the Gospel and meeting spiritual needs is believers’ top priority. Still, he has been open since October about his support for Cruz, believing silence “is a more awkward response” than stating his preference among Iowa’s politically vocal population.

Lubinus was a “caucus captain” who spoke for Cruz at his precinct in Ames, Iowa, and later volunteered as a Cruz delegate for the county GOP convention. Leading up to caucus night, he made phone calls for Cruz and campaigned with yard signs and social media posts.

“Several pastors” volunteered on the campaigns of specific candidates, Lubinus told Baptist Press, and Iowa Southern Baptists engaged in “friendly discussion” of the caucuses despite their varied candidate preferences. “All acknowledge there are several candidates to choose from and no candidate is perfect.”

By Joe McKeever “‘…your ways are not my ways,’ saith the Lord.”  (Isaiah 55:8) Keep an eye on how the Lord works in your life. You might learn something useful for the next time He wants to use you. This little couplet seems to sum up 90 percent of what Scripture and life teach us concerning the operation … END_OF_DOCUMENT_TOKEN_TO_BE_REPLACED