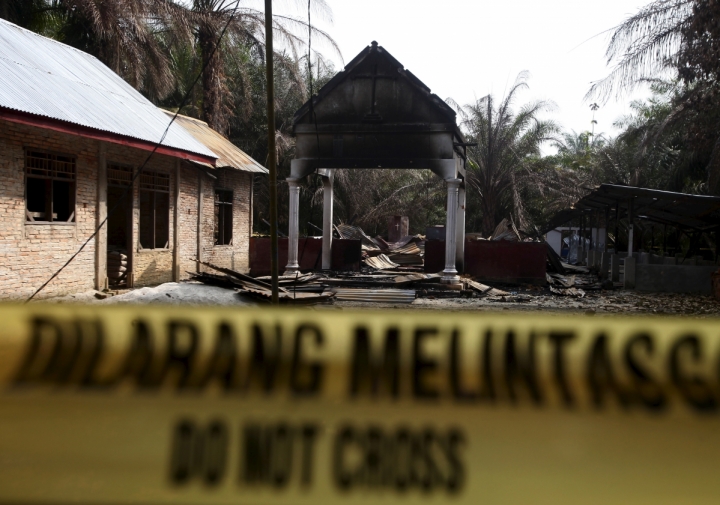 ACEH SINGKIL, Indonesia (Christian Examiner) – After Muslim hard-liners burned churches in Aceh Singkil on the island of Sumatra, over 8,000 people fled religious violence that has been building in Aceh province since a 2006 law discriminated against religious minorities.

The religious harmony law requires signatures of the religious majority, which is Islam in Indonesia, before a church may be built. Conflicts about church permits, which few possess, have escalated into discrimination involving mobs burning and looting in violence that has killed at least one person, according to World Watch Monitor.

Erde Burutu, a pastor of Pakpak Dairi Christian Protestant Church, which was burned in October, said temporarily displaced Christians who are returning to Aceh are afraid. “There is no guarantee of safety from the state,” he told WWM. “For us, safety goes beyond the physical; it means that we can have our church back and exercise our freedom to worship.”

After burning the Indonesian Christian Church on Oct. 13, the mob circulated a message that read: “We will not stop hunting Christians and burning churches. Christians are Allah’s enemies!”

Since the 2006 law was passed, thousands of churches throughout Indonesia have reportedly been closed. The country, which has a population of about 255 million, is over 87 percent Muslim and 7 percent Christian.

Local authorities in Aceh, attempting to placate thousands of extremists who demanded all Christian churches in the province be closed, selected 10 churches without permits to demolish with axes and sledgehammers beginning on Oct. 19. But a mob of about 700 people attacked and burned the Indonesian Christian Church, which was not on the closure list.

“Every church member is guarding their own church right now [from being destroyed],” a pastor told WWM, which reported some Christians allegedly defended the church with gunfire. A Muslim man was fatally shot dead and eight were injured in the ensuing fight, which caused area Christians to flee.

After the burning of the churches, over a thousand police were dispatched to guard against further discriminatory action by mobs during the tense month. People wept and prayed while they watched police demolish their church.

Houses of worship including churches and mosques are required to obtain a religious building license, even though these requirements can be strict and 80 percent of houses of worship do not have one, according to National Commission of Human Rights. “But even after all requirements are met, many churches are still prevented from getting the permit,” a source told WWM. Mosques without the permit are not penalized.

Harsono said the religious harmony law is a failure, as exemplified by the church closures. “It discriminates [against] minorities,” Harsono said, “thus making way for the majority, mostly Muslim hard-liners in Indonesia, to pressure the government to close down churches. If the government refuses, they will take the discriminatory law into their own hands.”

The situation in Aceh is particularly difficult for Christians, however, because the semi-autonomous province is allowed to enforce Sharia law. Though Sharia law is typically forbidden by the Indonesian constitution, people in Aceh have been caned for offenses like gambling and adultery, says Foreign Policy, citing the Jakarta Post.

“Stop violence in Aceh Singkil,” Joko Widodo, the president of Indonesia, tweeted in response to the mid-October mob. “Any act of violence, whatever the reasons behind it, not to mention if it is related to religion and faith, will kill diversity.”

The president received criticism for an apathetic response to the accelerating religious discrimination.

“[W]ithout change to the religious harmony law and a top-down imperative to stop church closures over trumped-up permit issues propagated by Islamist hard-liners, the situation for Christians in Aceh and other provinces will likely remain tenuous,” writes Foreign Policy reporter Benjamin Soloway.

Those in flight from Muslim extremists “desperately needed clean water, food, clothes, baby food, blankets, and medicines,” WWM reported, although the route to give them aid was treacherous, guarded by Muslim hard-liners “with an order to kill any Christians crossing the line.”

Some of the Christians who fled Aceh province have returned, while others remain in shelters in the province of North Sumatra or have attempted to permanently relocate there, outside the reach of Sharia law.

By Steve Horn ALEXANDRIA, La. (LBC) - This year has brought about more challenges and cancellations than any of us care to recount. For those meetings and events that were scheduled, more times than not, they happened virtually rather than in person. This has been true for us as Louisiana … END_OF_DOCUMENT_TOKEN_TO_BE_REPLACED