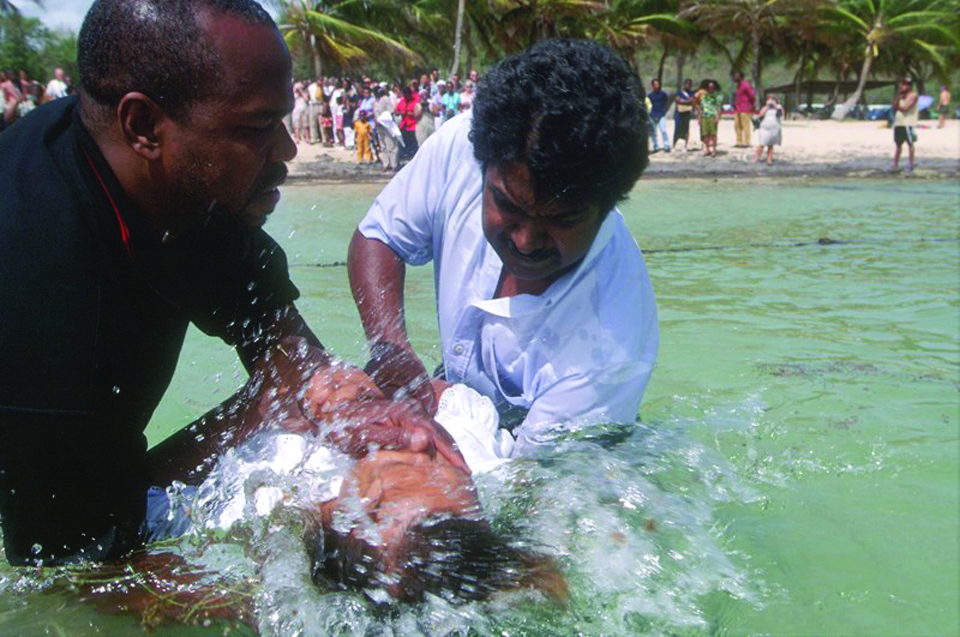 Pastors in Pointe á Pitre, Guadeloupe, baptize a new believer back in 2001. Baptisms by International Mission Board missionaries for 2015 dropped to 54,762 from 190 reported for 2014.

By Will Hall, Baptist Message Editor

ALEXANDRIA – Overseas baptisms for 2015 dropped to 54,762 from the 190,957 reported for 2014, according to information submitted by the International Mission Board in response to a request by the Southern Baptist Convention Executive Committee. Likewise, the number of new churches fell from 13,824 to 3,842 over the same one-year period.

The baptism figure represents the lowest level reported in 46 years.

A note explaining the declines states the decrease is “due to one large CPM no longer reported” (CPM refers to “church planting movement”). Since 2009, the IMB has changed data gathering procedures to “no longer include reports from partner conventions and unions,” but to report information about “work related to IMB personnel only,” according to annotations in the SBC Annual.

A table provided by IMB, in item 22 of 25 replies to “Ministry Inquiries,” shows an even larger four-year downturn. Baptisms fell by 211,689 since 2012 and the number of new churches declined 20,231 during the same time frame.

For perspective about the drop to 54,762 annual baptisms, according to data in SBC Annuals and information posted on the IMB’s website, the 50,003 baptisms for 1969 were achieved with 2,371 missionaries deployed on the field while the baptisms tallied in 2015 were accomplished with 4,707 personnel under appointment.

The information being reported for 2015 represents work done in 2014 during the transition of IMB leadership from Tom Elliff, who had led Southern Baptists’ largest evangelism entity since March 2011, to David Platt, who was elected in August 2014 to replace Elliff.

Meanwhile, the numbers for work accomplished in 2015 and 2016 likely will be impacted by the terminations of a reported 1,132 personnel as part of a plan launched in August 2015 to reduce the total number of IMB personnel “by at least 600.” The process will not finalize until nearly the end of April 2016.

The Baptist Message discovered the information about the fallen numbers of overseas baptisms and new churches while reviewing materials IMB supplied to the SBC Executive Committee’s request for information.

In advance of its Feb. 22-23 meeting, the SBC Executive Committee sent a data call to all ten entities, including itself, which receive funding through the Cooperative Program. It also queried LifeWay Christian Resources and GuideStone Financial Resources; and, the Council of Seminary Presidents provided comparative data.

The information from all of these SBC entities was posted online and an email was dispatched Feb. 19 to an electronic mailing list with a link, www.sbc.net/cp/ministryreports, to the main web page.

During this same time frame, the IMB released a press report Feb. 24, “Thanks to Southern Baptists, IMB in ‘much healthier financial position,’” which included six paragraphs of general information about the organizational “reset” that has fundamentally reformed the structure of Southern Baptists’ missionary forces by targeting missionaries at least 50 years old with a minimum of 5 years of field experience and dropped the number of IMB people in the field to 3,817, the lowest total since 1993.

However, as of the time of publication of this article, IMB has not yet issued a press release addressing the negative trend in baptisms and new churches discussed in the SBC Executive Committee materials.

By Steve Horn ALEXANDRIA, La. (LBC) - This year has brought about more challenges and cancellations than any of us care to recount. For those meetings and events that were scheduled, more times than not, they happened virtually rather than in person. This has been true for us as Louisiana … END_OF_DOCUMENT_TOKEN_TO_BE_REPLACED