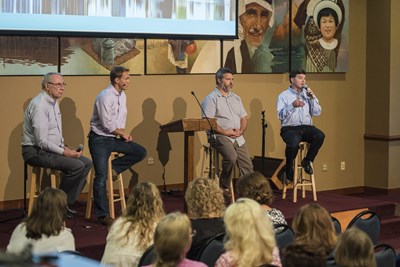 By Anne Harman, International Mission Board

The goal of the plan, IMB leaders shared, is to offer as generous a voluntary retirement incentive as possible, while honoring the years of service of those eligible and providing a smooth transition from personnel’s current role.

IMB will offer the voluntary retirement incentive to all eligible staff and active, career missionaries age 50 and older with five or more years of service (as of Dec. 31, 2015). For a missionary couple to be eligible for the VRI, only one spouse is required to meet the qualifications.

“Our desire in all of this is to be as generous as possible to as many people as possible,” IMB President David Platt said. “Since we are asking everyone in the organization to pray and discern if the Lord is leading them to a new place of involvement in mission, we know that 50-year-olds, for example, are going to be doing exactly that. And if the Lord leads them to make a transition, we want to provide for them as generously as possible.”

Sebastian Traeger, IMB executive vice president, presented specific details of the plan, which includes a base retirement package, a bonus incentive complete with financial and medical considerations, specific provisions for smooth transition, and additional benefits beyond the scope of a standard retirement package. Personnel who voluntarily elect to accept the incentive will finalize their decisions in early December. Those with greater than 15 years of service will be given “emeritus” status to honor their years of service.

Not all missionaries will choose to transition to the U.S. Some may choose to stay on the field as volunteers, through alternative pathways or through employment options. “If you’re in a scenario where you would like to stay on the field, by all means, we want to help you to do that,” Traeger told missionaries, noting personnel transitioning to volunteer status would be allowed to use their housing and vehicles through the end of January 2016.

IMB will provide a transition team to serve every person who chooses to take the VRI. Missionaries will be given a transition grant to accommodate their adjustment. Also, local churches, seminaries and state conventions have contacted IMB offering to help missionaries transitioning back to the U.S. and committing to pray for IMB during this time of transition.

The VRI information was shared in two segments during the town hall meetings: first to missionary personnel, who mostly attended via electronic communication; and then in person and online to staff, who are mostly based in Richmond, Virginia. The two meeting times allowed leadership to convey specific details that pertain to each group.

The incentive originally was announced during an Aug. 27 town hall meeting when IMB leaders laid out a plan to address IMB’s revenue shortfalls and complete a reset of the organization.

Since the Aug. 27 meeting, Platt said, he has repeatedly heard people wonder why IMB would ask seasoned missionaries to leave the field instead of freezing (or decreasing) the number of new missionaries to be sent in the next two years. Platt reported that, after much prayer and discussion, leadership concluded their current plan was the most viable option amidst a variety of non-ideal options. Specifically, he noted four reasons why IMB is not freezing or further decreasing the number of new missionaries now.

First, “every type of person in the IMB is important,” Platt said, including long-termers and short-termers, staff and missionaries, younger personnel and older personnel, new missionaries and seasoned missionaries. “For this reason, I don’t want any particular type of person in the IMB to step aside from service. That is why I have wanted to call every single person within the IMB to put a blank check on the table and to ask, ‘Is the Lord leading me to a new phase of involvement in mission?’”

Platt reiterated that the VRI is only Phase 1 of leadership’s plan to address revenue shortfalls. Part of Phase 2 of the plan is an opportunity for anyone working at IMB to voluntarily indicate that God is leading him or her to a new place of involvement in mission outside the IMB.

Second, IMB leadership stresses they want the initial steps of the plan to be voluntary.

The voluntary nature of the plan also applies to new missionaries the IMB already has committed to send in 2015 and 2016. “We did not want to say to those new missionaries, ‘You don’t have a choice,’” Platt said. “In light of our commitment to them, we want to give them the same voluntary choice we’re giving everyone else.”

Third, sending people through IMB “is born out of a conviction that new missionaries being sent from churches through the IMB is a foundational, non-negotiable part of who we are and what we do,” Platt said, noting if IMB were to freeze sending new missionaries, within three years IMB would have zero apprentices or journeyman on the field.

IMB will continue to post updates, including frequently asked questions and answers, online on imb.org.

By Steve Horn ALEXANDRIA, La. (LBC) - This year has brought about more challenges and cancellations than any of us care to recount. For those meetings and events that were scheduled, more times than not, they happened virtually rather than in person. This has been true for us as Louisiana … END_OF_DOCUMENT_TOKEN_TO_BE_REPLACED