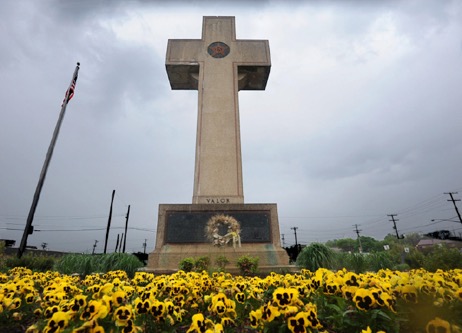 Bladensburg, Md. – On November 30 the United States District Court for the District of Maryland ruled that the Bladensburg World War I Veterans Memorial, built in the shape of a cross, is constitutional. Today, the American Humanist Association appealed the District Court’s decision to the U.S. Court of Appeals for the Fourth Circuit. The group alleges that the cross-shaped memorial violates the Establishment Clause of the First Amendment. The group demands that the monument be demolished, altered or removed.

Law firms Jones Day and Liberty Institute represent The American Legion, the largest veterans service organization in the country, which erected the monument 90 years ago in honor of 49 men of Prince George’s County, Md. who gave their lives during the First World War. The Legion is committed to defending the honor of the nation’s military veterans and the memorials that honor their service.

Noel Francisco, lead counsel for The American Legion and chair of Jones Day’s Government Regulation Practice, says, “This veterans memorial has stood in honor of the fallen for almost 100 years and should be allowed to stand for 100 years more. We stand ready to defend the memorial and the men it honors against this meritless attack.”

Kelly Shackelford, President and CEO of Liberty Institute, says, “The humanist group is facing an uphill battle on this appeal. After a thorough analysis of the facts and the law, the Court was clear that the Memorial is completely lawful. We are confident the Fourth Circuit will agree and uphold the constitutionality of this historic veterans memorial.”

By Lane Corley Olive trees produce one of the most desired and sought after fruits around the world. The trees can live for thousands of years. The olive and the olive tree is spoke of in the Bible on numerous occasions. Including a few references to family life, like in Psalms 128:3 – “Your children will be … END_OF_DOCUMENT_TOKEN_TO_BE_REPLACED