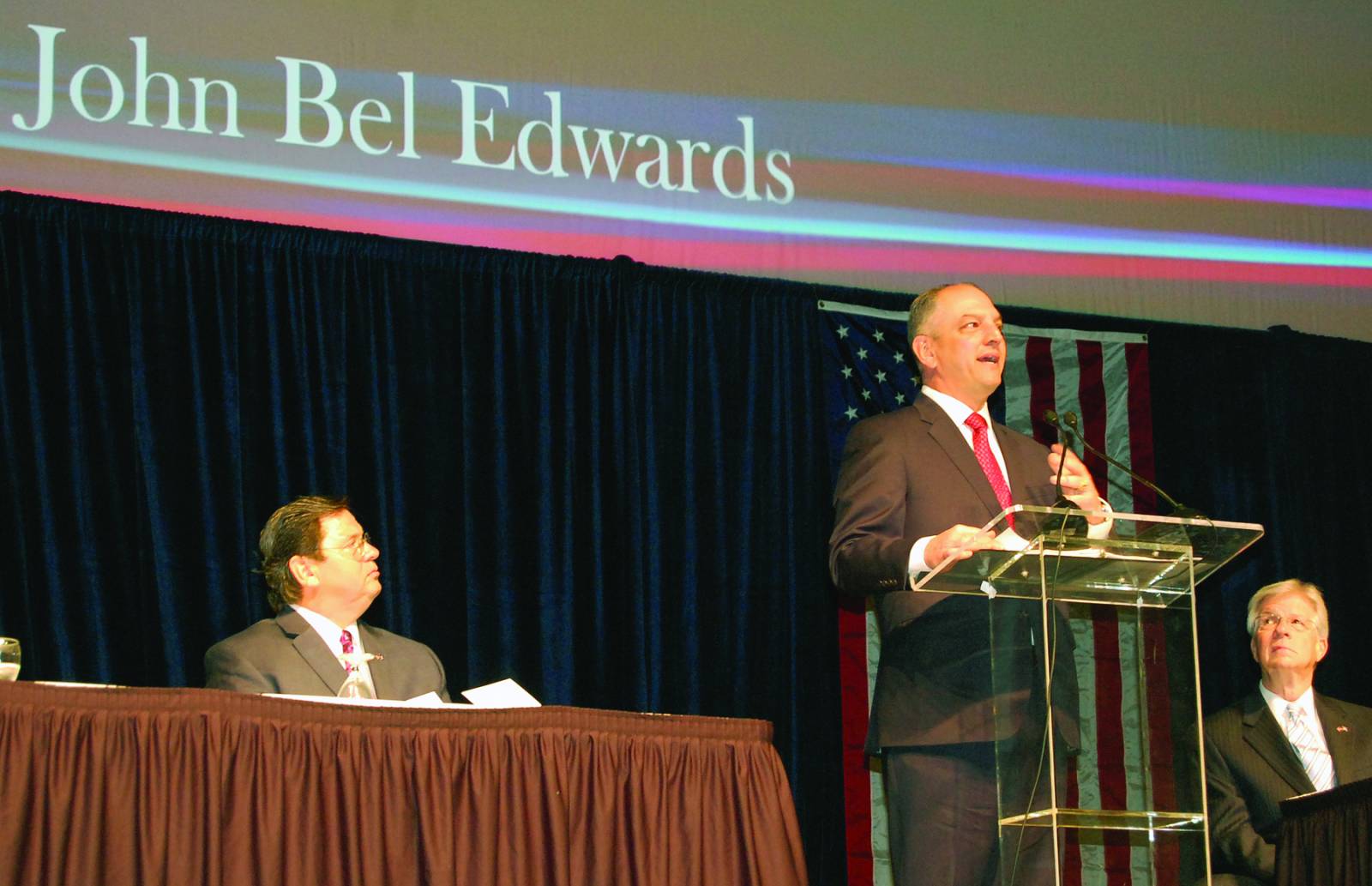 Gov. John Bel Edwards quoted I Thess. 5:18, "In everything give thanks for this is the will of God in Christ Jesus concerning you," during his message to more than 1,400 people gathered for the 52nd annual Governor's Prayer Breakfast held at the Baton Rouge River Center on Wednesday, March 23. "While we face challenges here in Louisiana we know there are no things our God can't handle," he said. photo by Mark H. Hunter

HOUSTON (BP) – In a Feb. 13 verdict that left both sides claiming victory, a Houston jury handed down a decision in a lawsuit against the city and administrators for their dismissal of a petition by a coalition of pastors and civic leaders opposed to the city’s Equal Rights Ordinance.

Though the jury – in a 10-2 verdict – found nearly 2,500 forgeries among the 54,000 voter signatures, they dismissed the city’s allegations of fraud.

With no definitive winner revealed by the verdict, the decision will not be finalized until 152nd District Court Judge Robert Schaffer issues his judgment. Schaffer was out of town and did not preside over the reading of the verdict.

Following the verdict lead defense attorney Geoffrey Harrison claimed the verdict as a win for the defense and Mayor Annise Parker, who championed the ordinance as a “personal” issue.

“If the court’s ruling follows the jury’s verdict this will be a complete and total vindication for the city,” Harrison told reporters following the verdict. “And the petition, which we declared failed back in August, will indeed be found, judicially, to have failed as well.”

But Andy Taylor, lead attorney for the plaintiffs, said once Schaffer – and subsequent appellate courts – apply the law and legal precedent, any still-disqualified voter signatures could be ruled valid, breathing new life into the referendum.

“We are very excited the jury vindicated us and found no fraud,” Taylor said, following Harrison’s remarks. “This jury was asked by this mayor to indict these hardworking citizens – these volunteer circulators – on the basis that they committed fraud. The jury found 13 out of 13 times no fraud was committed.”

Lead attorneys indicated the case will be appealed when Schaffer’s ruling finalizes the jury’s work. The case would then go to the First or Fourteenth District Court of Appeals in Houston. Taylor said he will ask the court for an expedited process in order to get the referendum on the November ballot should his clients prevail in court.

Juror Patsy Jenkins said the panel had a good working relationship and established criteria for answering each of the six questions with the 154 subsets. Their review produced a wide range of findings, which left observers unable to discern their significance at first glance.

Although charged with answering questions related to fraud, forgery, circulator identity and circulator oath validation requirements, jurors were not asked to render judgment on the ramifications of the city’s actions.

“We felt the people were not heard … the true and genuine were not heard,” Jenkins said. Thousands of registered Houston voters signed the petition in anticipation of a November 2014 vote on the ordinance, but their signatures were dismissed for a host of reasons including the work of some unscrupulous circulators.

Jurors heard arguments over the definitions of “signature” and “subscribe” as they related to the city’s dismissal of all but 3,905 of the 54,000 signatures on a petition to repeal the Equal Rights Ordinance passed last May, which included sexual orientation and gender identity as protected classifications. Those taking the witness stand included Feldman, Parker, pastors, church employees and petition circulators.

Plaintiffs argued the city used a subjective standard for dismissing voter signatures while defense attorneys charged the petition was riddled with fraud and forgeries and, ultimately, did not comply with city code.

The lawsuit’s three plaintiffs included Jared Woodfill, former chairman of the Harris County Republican Party, and F.M. Williams and Max Miller, African-American pastors and community leaders. They represented the racially and politically diverse coalition of church and civic leaders who fought for nearly a year to halt the passage and implementation of the Equal Rights Ordinance.

The plaintiffs’ first witness, Dave Welch, executive director of the Houston Area Pastors Council, testified for more than five hours, mostly on cross examination by Harrison, one of more than a dozen private and municipal attorneys providing the defense.

Welch testified that he drafted the referendum petition page drawing the format from an example given on a website linked to the official City of Houston website. But in doing so he eliminated what appeared to be an errant line in the form.

That line, defense said, was essential to the form’s compliance with the Houston City Charter. Without it there was no place for petition circulators to sign the oath, or affidavit, at the bottom of the page. No signature; no oath; no valid petition pages, they argued.

But Taylor said the online affidavit did have a place for the circulator to write their names. And since the oaths were witnessed and validated by notary publics — a representative of the State of Texas — the circulators’ signatures should be accepted as presented on the form.

Initial dismissal of the voter signatures in August was based on illegibility, printing of circulator signatures versus cursive, and the identity of the circulators, among other issues. The dismissal gave petition organizers — calling themselves the No UNequal Rights Coalition — only 15,249 of the 17,269 necessary signatures to force a second vote on the ordinance by city council.

The coalition sued, and the signature line became the main point of contention for the defense during the course of the investigation and trial. By Jan. 26, the day of jury selection, the number of valid signatures had shrunk to 3,905.

The jury, with the exception of Jenkins and a second juror, ruled in the city’s favor when analyzing the petition pages of 98 circulators. They blamed Welch, who created the form, for not checking other resources to ensure the accuracy of the document. But they also faulted the city for its publication of a petition form that lacked a definitive signature line.

Throughout the trial Taylor claimed Parker and Feldman (who resigned in December) spent more time and resources trying to disqualify voter signatures than seeking signature confirmation. African-American plaintiffs and their supporters, many of whom worked in the civil rights movement, claimed the situation seemed all too familiar. The rights of the voters had been quashed.

But Harrison repeatedly said the issue was about the rule of law and compliance with the Houston City Charter.

“Thousands of signatures on this petition are not just highly suspect but clearly not genuine and show evidence of forgery and fraud,” Harrison said.

Parker, whom the plaintiffs’ attorney called as an “adverse witness,” concurred and challenged Taylor’s analysis of the signatures.

“There are lots of different ways to analyze the petition,” Parker said from the stand Feb. 2. But, she continued, “it doesn’t matter if you miss [the goal] by 2,000 signatures or two. The law is the law.”

“But if someone doesn’t get counted,” Taylor countered,” it might matter to them — a lot.”

When plaintiffs rested their case later that day, the defense called former city attorney Feldman as their first witness. He told the jury he did not initially press the issue of the petition format that would eventually nullify the vast majority of voter signatures because the referendum had failed. It wasn’t until the lawsuit was filed that city attorneys began scrutinizing the affidavit portion of the form with its missing signature line.

“[The referendum process] was designed to keep people from signing as someone they weren’t,” Feldman said in defending his actions.

Seeking to illustrate their allegations of forgery and fraud the defense called a handwriting expert, Janet Masson, to cull through the petition pages. Her review revealed about 2,355 “irregularities” throughout the 5,199 pages of signatures. The jury counted those “irregularities” among the forgeries.

But Taylor said the city’s validation standard was inconsistent throughout the investigation and, therefore, unjust. He held the defense to the city’s December analysis of signatures documented as a “final” count. According to that analysis there were 15,972 valid signatures, just 1,297 shy of the requisite number for the referendum.

But the defense consistently argued the “final” count had a footnote stating more pages could be invalidated.

Taylor accused the city of moving the goals, making compliance with the rules impossible. He told jurors they were the plaintiffs’ only recourse in the fight against city hall.

He illustrated the point during closing arguments by tossing file after file of the thousands of invalidated signature pages onto the floor. With each bundle of pages, Taylor said, “You don’t count. You don’t count. They don’t count.”

“These aren’t signatures,” he told the jurors. “These are people trying to validate their right to petition the government.”

By Joe McKeever Freely you have received; freely give. (Matthew 10:8) JACKSON, Miss. (BP) -- Dr. Watson was complimenting Sherlock Holmes on a brilliant observation no one else had noticed. "Of course," Holmes remarked. "It's what I do." Forgiveness and grace -- that's what we believers do. Here is … END_OF_DOCUMENT_TOKEN_TO_BE_REPLACED