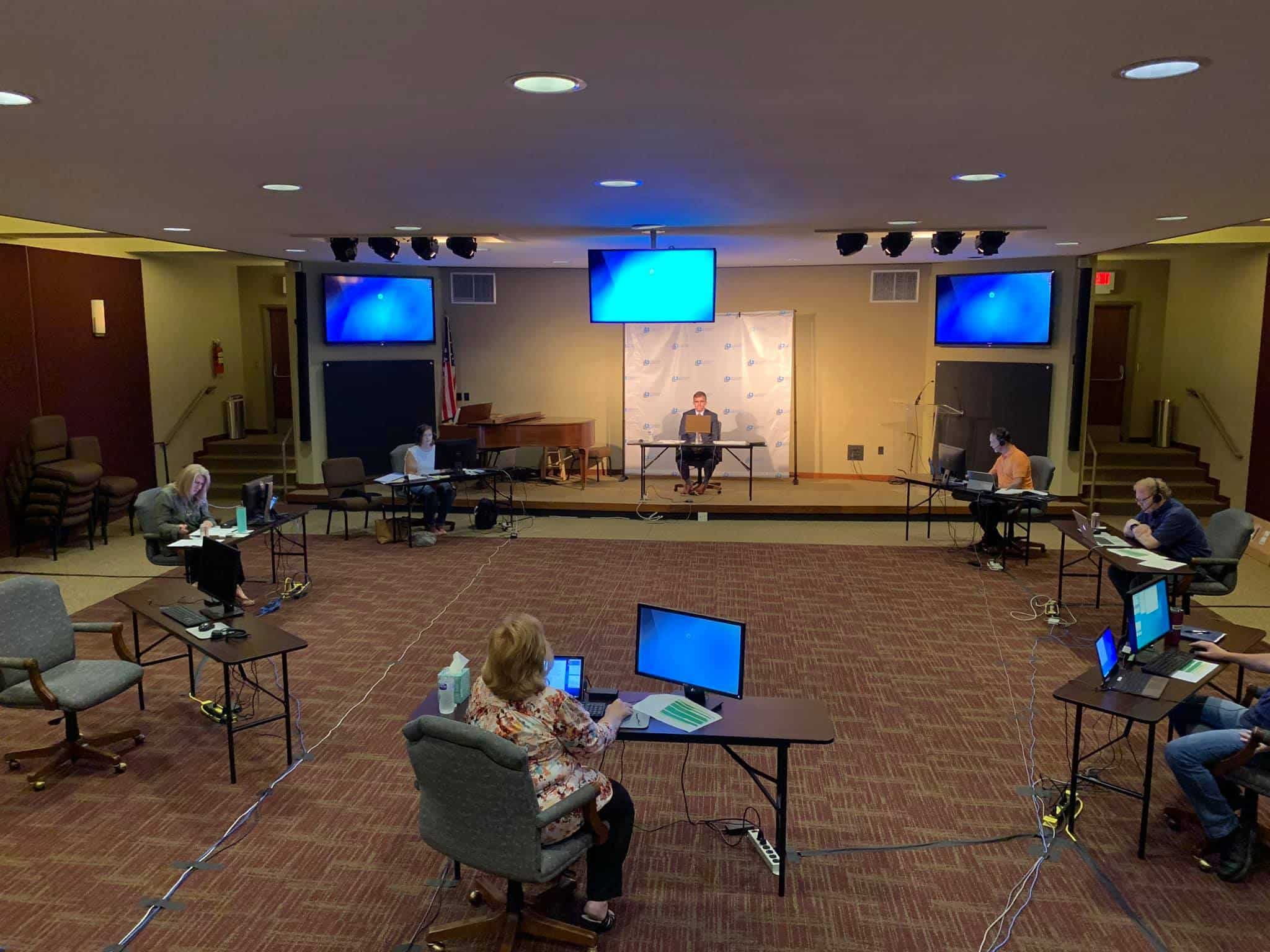 ALEXANDRIA, La. (LBM) – Steve Horn, on the heels of the one-year anniversary of his election as Louisiana Baptist Convention Executive Director, said during the first-ever virtual meeting of the Executive Board that God is moving throughout the state amid the novel coronavirus pandemic.

“Words don’t come easy right now for any of us,” Horn told 64 board members logged in to computers around the state during the May 5 meeting. “If you’re like me, you are riding a rollercoaster of emotions. Depending on the hour, I feel devastated, paralyzed, hopeful, angry, fearful, heartbroken, overwhelmed, joyful, nothing at all … repeat. This is a challenging time when nothing feels normal.

“The COVID-19 pandemic is affecting all of us—our own families, our churches, our ministries, our camps, our Bible schools, our Convention,” he continued. “It is affecting finances, health and access to health care, and even isolating us from friends and loved ones.

“Even in the uncertainty, I know that God is God, and He is up to something.” 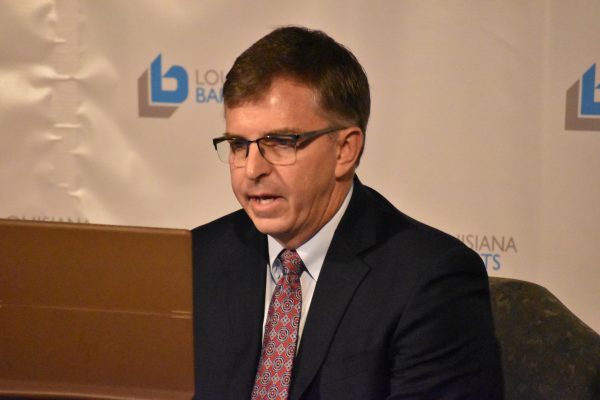 Horn shared with board members while business as usual has changed since Gov. John Bel Edwards issued his first coronavirus-related proclamation March 13, the state missions staff has continued encouraging pastors and churches, and Louisiana Baptists have not stopped sharing the Gospel.

Before the coronavirus closed campuses around Louisiana, the state’s Baptist Collegiate Ministries reported a great year of outreach and growth, Horn said. Even with the school year ending early, BCM campus directors have reported continued momentum through virtual discipleship groups and weekly gatherings.

“BCMs were ready and equipped to go online with ministry,” Horn said. “Discipleship is a lot like church tithers. Those that are committed tend to stay committed. So, those individuals engaged in intentional growth have continued and the urgency of life or death has caused them to amplify their evangelistic zeal.”

Horn shared that disaster relief ministry has been active in the last few weeks. During that time, teams distributed 24,000 N-95 respirators to Ochsner Medical Center in New Orleans and hospitals in Alexandria; a unit provided hot showers at Christus St. Frances Cabrini Hospital in Alexandria and Livingston Parish Jail in Livingston; a cooking team fed thousands for a couple of weeks in Lake Charles and chaplains continued to answer calls on a prayer line. Additionally, teams have assessed and cleaned up homes damaged by a series of tornadoes that have devastated parts of the state recently.

Horn added that the missions and ministry team has worked, through phone calls, with Gentilly Baptist Church in New Orleans and the New Orleans Baptist Association to create an opportunity for the graduates of New Orleans Baptist Theological Seminary’s Angola Penitentiary campus to engage in ministry to men and women that are getting out of prison, as well as their families.

Preparations continue for multiple evangelistic and equipping events, including summer camps, Youth Evangelism Celebration, ReGroup Sunday school conference and the state evangelism conference, known as ECON. Horn said pre-enrollment for camps at Tall Timbers Baptist Conference Center in Woodworth was on pace to set a record attendance, surpassing last year’s total of 2,400. Only the Champions Camp at Tall Timbers has been rescheduled to Sept. 18-19. The state missions services and Tall Timbers Baptist Conference Center staff are monitoring the situation regarding decisions made for future camps.

During the first quarter of 2020, ‘Here For You,’ Louisiana Baptists multi-media evangelism strategy, has reached more than 93 percent of television households across the state an average of at least eight times during the weeks the commercials were on the air. A new coronavirus-themed commercial began airing in mid-April, and a resource page dedicated to the pandemic has logged 1,495 views.

Moreover, through a partnership with the Billy Graham Evangelistic Association, more than 100 people each month have made decisions for Christ during the first quarter of the year.

Horn shared that in anticipation of the approval of the CARES Act – a $2.2 trillion coronavirus impact aid bill that provides economic relief to workers and businesses – the business team mailed 501(c)(3) letters to every church and a mass e-mail explaining how it applies to churches. The team also was instrumental in helping change and define the inclusion of churches in the Payroll Protection Plan of the CARES ACT through appeals to Senator John Kennedy and Congressman Mike Johnson which allowed bank attorneys to release the funds. Johnson is a member of First Baptist Church in Bossier City.

Even with limited resources, each church that sent an e-mail or called was consulted and assisted.

“We have an amazing team, and they have worked very hard,” Horn said. “In addition to all that has already been reported, we were about the work of encouragement, making over 3,500 phone calls to pastors and church leaders.”

Horn said challenging days have come, but he has been inspired and encouraged by how quickly Louisiana Baptists have adapted.

“For the year we’re down roughly 10 percent compared to last year but since we are holding the line with regard to expenses, we’ve been able to avoid drastic cuts and staff reductions.” Horn continued. “Needless to say we are watching things very, very closely.”

He reported that funds from the Georgia Barnette State Missions Offering provided LBC associations with $305,000. Money will be used to help churches or, in some cases, associational ministries.

Horn also noted that even in the midst of the coronavirus, 18 evangelists were blessed with $1,000 each to help offset some of their losses due to the cancelation of their revivals and speaking engagements. The evangelists are members of the Louisiana Conference of Southern Baptist Evangelists.

Executive Board President David Goza, in his remarks, reminded board members that in the last days perilous times will come. Citing 2 Timothy 4:2-5, Goza emphasized the need to preach the Word, be watchful, endure afflictions, do the work of an evangelist and fulfill ministry.

“Be faithful to the end,” said Goza, pastor of Jefferson Baptist Church in Baton Rouge. “Do what God has called you to do.” 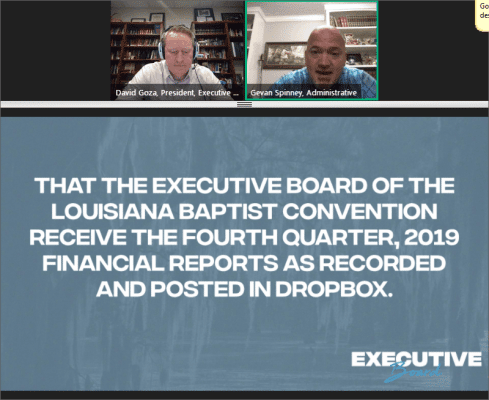 In his remarks, LBC President David Cranford said as churches begin to restart and re-gather, his prayer is they will not forget about the need for revival.

“We are all going to be making many, many decisions in the coming days and some of those decisions will be no win decisions, we will anger some people no matter what we decide,” said Cranford, pastor of First Baptist Church in Ponchatoula. “May the negativity and challenge of the coming days not dampen what I see as a spark of revival in our lives and in our churches.”

Citing Colossians 4:26, Cranford encouraged board members to devote themselves to prayer and stay alert in prayer.

By Stewart Holloway PINEVILLE, La. (LBM) - For over two months now, my oldest son, my mom, and I have spent most Friday mornings at my mom’s clearing overgrown brush. What was planted as a fruit orchard in an open pasture almost thirty years ago has grown into a wilderness of every kind of vine and tree … END_OF_DOCUMENT_TOKEN_TO_BE_REPLACED