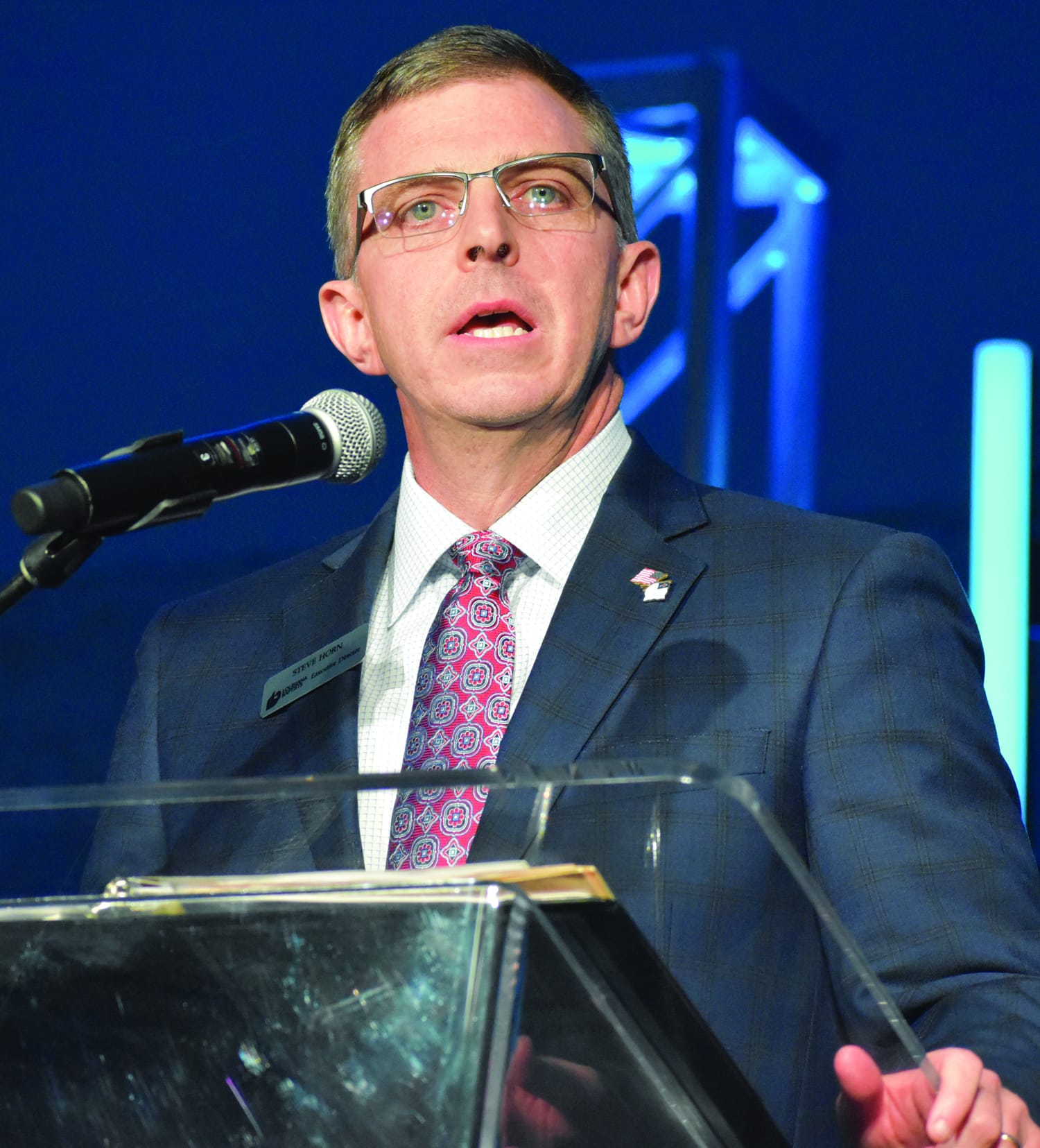 ALEXANDRIA, La. (LBM) – Steve Horn, during his first Louisiana Baptist Convention executive director’s report, called on messengers to unite for the sake of the Gospel. “As I have travelled our beloved state, I have verified what I have long since believed,” Horn said during the Nov. 11 evening session of the LBC Annual Meeting. “We are different. We don’t all agree on every issue in Southern Baptist life. But, taking the picture that the Bible gives to us about the different parts of the body of Christ, we should celebrate our differences instead of complain about our differences. “And in addition to a renewal of commitment to our Lord and to one another, we need a renewal of our commitment to our cooperative ministries,” he continued. “You are here at the convention

because you believe in that spirit of cooperation or at least are curious about what we could do in cooperation with one another. This is a great time to renew our commitments because so much is new.”

Horn said Louisiana Baptists have much to celebrate. Since the 2018 LBC Annual Meeting, five new Southern Baptist entity heads have come on board, in addition to the LBC approving its new executive director in May. Additionally, 17 new churches were seated for the first time during the 2019 LBC Annual Meeting. Horn said Louisiana Baptists have made progress on many of the goals in the President’s 2020

Commission Report, an initiative that seeks to reach every generation and every people group in Louisiana with the Gospel by the end of next year through the avenues of congregational revitalization, church planting, communications and collaboration. The 2020 recommendations were crafted collaboratively by a commission of 400 Louisiana Baptist leaders, staff members and laypeople, working in

20 subcommittees of 20 members each. Ten “key actions in reaching our state” – known as KAIROS – were developed to engage two audiences – the next generation and every people group. Since 2010, 255 churches have been planted in the state, 45 short of the goal of 300 by 2020/2021. Of those, 143 are non-Anglo congregations. Non-Anglos have served in positions of leadership, including Leroy Fountain,

church health strategist for New Orleans Baptist Association, capturing re-election as first vice president of the LBC, and three out of the four sub-committee chairs of the LBC Executive Committee held by non-Anglos. Horn also cited progress in the areas of compassion ministries (an estimated 65 to 70 percent of the more than 1,600 LBC congregations are involved in some type of compassion ministry) and Operation Highways and Hedges, a multi-year, multi-platform media strategy addresses our desire to be more engaged in communicating the Gospel with every person in Louisiana (600 people viewed a Here For You Gospel presentation in June, and 124 of those made a decision to trust Christ).

While Louisiana Baptists have celebrated much progress in the 2020 Commission goals, Horn said one area that has not seen growth is Cooperative Program giving, Southern Baptists’ primary channel for funding missions causes. He asked Louisiana Baptists that have not given as much lately to consider joining with the other churches in the convention and give to the CP so more can be accomplished to advance the Gospel.

“Whether justified or not, whether God’s will or not, whether principled decision or not, some in Louisiana Baptist life have taken their ball and gone home,” Horn said. “Hear my heart on the matter. The decision of cooperation belongs to our churches. This is the way it should be and will always be. However, some of our decisions have resulted in unintended consequences.

Horn expressed appreciation for additional cooperation among Louisiana Baptists. He welcomed to the stage Freddie Laing, pastor of the 128-year-old St. Matthews Baptist Church, one of nine of the 13 Southern Baptist churches in the Bahamas that were either damaged or destroyed in the aftermath of Hurricane Dorian. Louisiana, Mississippi, Southern Baptist Disaster Relief, the International Mission Board and Baptist Global Response have partnered to rebuild the facility through a project called ‘Bahama Rebuild.’

The first team is expected to work on the island around Dec. 8. Laing said he praises God for the blessings provided in the midst of the destruction.

“I am continually praising the Lord you will be with us for the rebuilding of our church,” Laing said. “Thank you for committing to help us in this most difficult time.”

Howe shared the Executive Committee has developed five key ways to reach others for Christ: live and breathe Gospel urgency; empower all churches, generations, languages and ethnicities in the SBC; tell and celebrate what God is doing; love others like Jesus does; and prioritize, elevate and accelerate CP giving.

“We are here to serve Southern Baptists,” Howe said. “We are committed to helping Southern Baptists reach every person with the Gospel of Jesus Christ in every town, every city, every state and every nation across the world.”

Such an effort also will require uniformity to cooperate for their primary mission.

“Come with me and beg God for His favor and for the unity of the people,” Horn said. “Can you see it? Our success is not ultimately tied to our strength, our skill, our intellect, our personality, and certainly not our resources. In fact, God says that our victory will not be based on any of that, but on Him.”

By John Hebert, Louisiana Baptist missions and ministry team leader ALEXANDRIA, LA. (LBM)--Do you know what Winston Churchill, Bill Gates, Walt Disney, and Colonel Sanders have in common? It has nothing to do with their fame or notoriety, I would suggest. Instead, it is the trait that I contend was the cause of … END_OF_DOCUMENT_TOKEN_TO_BE_REPLACED