HIS Church in Pineville celebrated 40 baptisms, June 6, during its annual lakeside service. Pastor Steve Speer said baptizing in Pineville’s Lake Buhlow brings about a sense of nostalgia from when baptisms use to be performed regularly in such a setting. Submitted photo

PINEVILLE, La. (LBM) – John Sefcik occasionally attended church and some days even read his Bible for the first 49 years of his life, but he had not been “all in” for Jesus, he told the Baptist Message.

But the Holy Spirit used a conversation with Kevin Paul, His Church associate pastor, that brought Sefcik under conviction to repent and become a devoted follower of Christ. He publicly shared about his spiritual decision, along with 39 other new converts, during a special baptism service sponsored by His Church, June 6, at Lake Buhlow in Pineville.

“When I look back, I realized God has been pursuing me all my life,” Sefcik said. “I had forgotten about God, then COVID hit and difficult circumstances brought me to my knees. The more I got into the Bible and fellowshipped with others, the more my attitude changed about life. I thought I was doing the right things, but eventually understood what being a Christ follower was all about. I’m glad God didn’t give up on pursuing me all these years.”

Both Gabriel, 10, and Caleb, 11, had soaked in biblical truths from him and their mother, Samantha, as well as the faithful teaching by extended family and His Church members. The spiritual fruit came to harvest when Caleb repented of his sins and made a commitment to follow Jesus as Lord in April 2020, followed by Gabriel who did the same in April of this year. 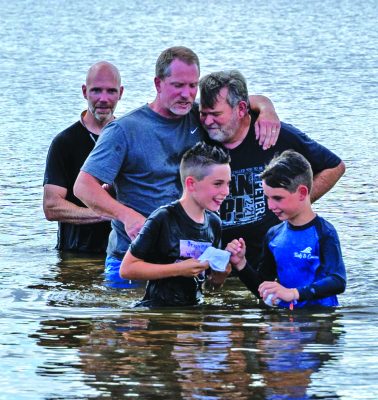 “One of the most phenomenal experiences you have is baptizing your own children,” McKee said. “You spend years raising your kids and to see them make the ultimate decision to follow Christ, and to be obedient through baptism, is just an amazing feeling.

“There are a lot of decisions your kids make in life, but this is the decision that matters more than any other,” he continued. “To see them make it and know you will be together with them forever is more than any dad could want.”

HIS Church Pastor Steve Speer said baptizing in the lake brings about a sense of nostalgia from when baptisms in churches and even during biblical times were held many times in that setting, instead of the more traditional baptisms inside a worship center. Since January, His Church has baptized 60 people. If His Church continues this pace, they will surpass their highest ever annual total of 72 baptisms set back in 2016.

“It was an amazing thing to baptize that many people who received Christ,” Speer said. “Tears were flowing all around.

“It’s such a witness to get out in the world and be at a place where people are fishing and swimming and enjoy the lake,” he continued. “Some of those I would assume are unchurched and they see people make a New Testament statement of faith in baptism. The little boys think it’s the greatest thing in the world to get baptized in the lake and the adults like the throwback to how this used to be.”

The average age of the church membership is 32 years old, and this largely Millennial congregation appreciates nostalgia such as lake and river baptisms, Speer said.

By Mark Devine As the dust settles from the annual meetings of two major evangelical denominations, the contrast between them could hardly be more stark. Courage won the day among those gathered for the PCA. Fears of elitists won out among the messengers to the SBC. ... READ MORE … END_OF_DOCUMENT_TOKEN_TO_BE_REPLACED