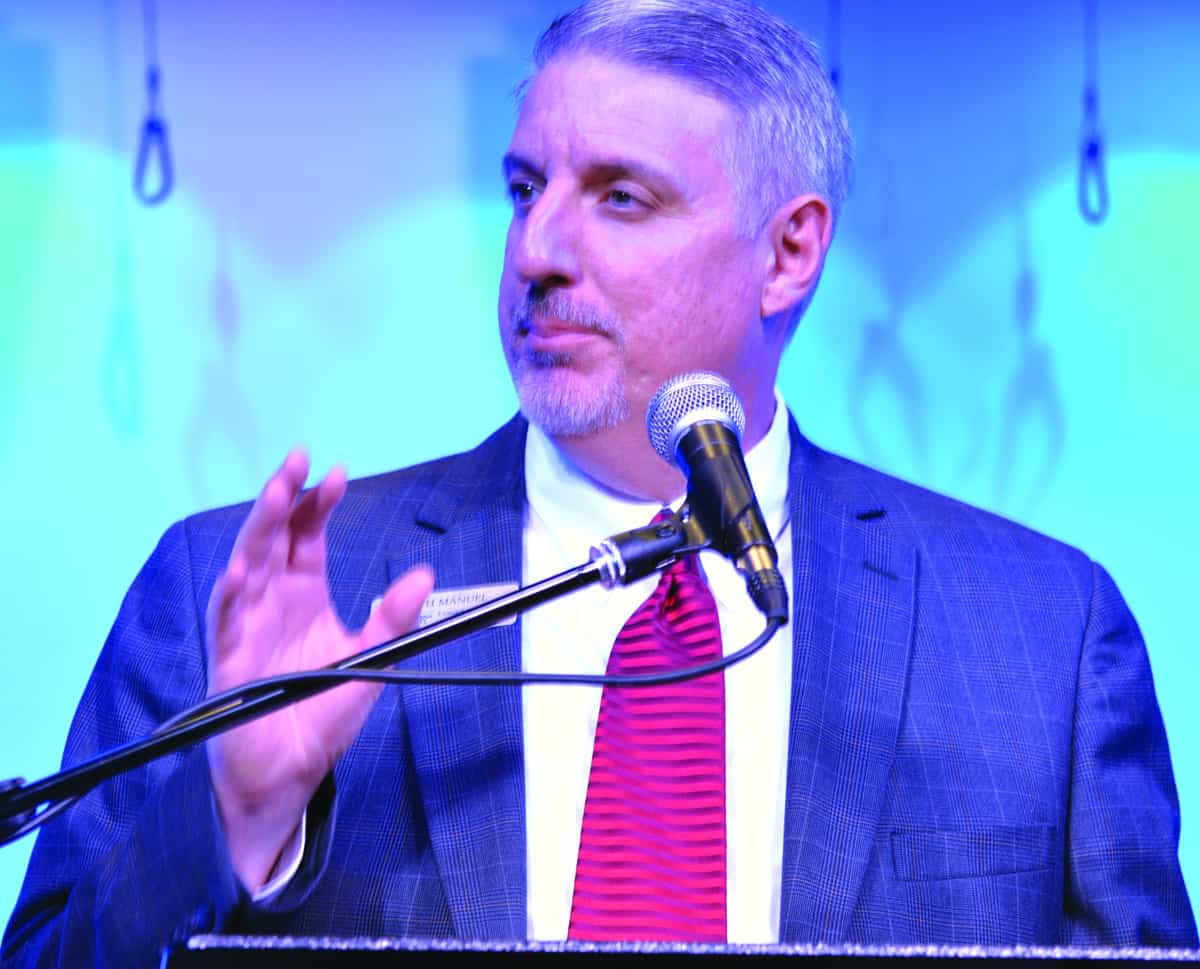 Louisiana Baptists Evangelism and Church Growth Director Keith Manuel tells Executive Board members he is optimistic the Harvest evangelism initiative can help turn around a downward trend of baptisms in the state. The Harvest is the largest joint effort for evangelism ever undertaken in the state to pray for every home and share Christ with every person in Louisiana.

WOODWORTH (LBM) – Despite baptisms dropping below 10,000 in the state for the first time in several decades, Keith Manuel told Executive Board members he is optimistic the trend can turn around because of the cooperation by Louisiana Baptist churches through the Harvest evangelism initiative.

“There’s good news in the bad news,” said Manuel, Louisiana Baptists Evangelism and Church Growth director. “We have a great opportunity. We’ve been there before; we can do it again. We know what we need to do. We just need to get our eyes back on the fields that are white unto harvest.

“We’ve got to make what’s important ‘important,’ and those souls are important,” he said.

In his report to the Executive Board May 1 at Tall Timbers Conference Center in Woodworth, Manuel updated board members on the Harvest, the largest joint effort for evangelism ever undertaken in the state.

The end goal of this initiative was to involve at least 700 churches to pray for every home and share Christ with every person in Louisiana. By early May, 876 churches had signed up to participate.

Manuel said his office has partnered with 16 different Harvest events involving many associations and churches.

One way Louisiana Baptists can participate is by visiting louisianabaptists.org/harvest for updates and resources, Manuel explained. Churches also can sign up as partnering churches and encourage members to join BlessEveryhome.com.

For 20 days, Bless Every Home participants will receive a daily email containing names (heads of household) and addresses for five neighboring houses as a reminder to pray for the salvation of members of that home – for a total of of 100 of their neighboring families.

“We just need to keep our eyes lifted up,” Manuel said. “The fields are still white unto the harvest. There are a lot of people who need Jesus. That’s good news. There’s great opportunity.”

HERE FOR YOU UPDATE

John Kyle, communications director for Louisiana Baptists, shared a “Here for You” television spot that aired during the Super Bowl has reached an estimated 849,000 people across the state an average of two or more times.

A social media campaign, which ran in conjunction with the series of television commercials, engaged an additional 319,000 people via Facebook and Twitter. The outreach was made possible through the Georgia Barnette State Missions Offering.

“Here For You” is Louisiana Baptists’ multi-year, multi-platform media strategy designed to give every person in Louisiana the opportunity to say yes to Jesus.

Birthed from the President’s 2020 Commission in 2013, “Here for You” launched its first pilot market in mid-2014 in southwest Louisiana. Currently the campaign is in its third pilot market in the southeast part of the state.

“We’re facing an epidemic in our country,” he said. “It’s the epidemic of truth decay. If you believe in absolute truth today you’re considered a hater, you’re considered a bigot. We do not value truth in our culture today. There’s only one remedy for truth decay – truth, a consistent, creative dose of God’s truth delivered directly to people’s hearts and homes.”

Building on the theme of reaching the state with the Gospel, Louisiana Baptists Executive Director David Hankins said Christ followers receive a special blessing when they give to Kingdom work.

“When we get our folks to give like they ought to give, we all are blessed and we become winners, and God’s work can flourish like we would like it too,” Hankins said.

“Because even though He was rich, He became poor for your sakes so that you through His poverty might become rich,” Hankins said. “You want to be like God? Give. You want to have the attributes of God? Give yourself away and be a blessing.”

Louisiana College President Rick Brewer said he is hopeful the school will continue a trend of enrollment growth as it moves closer to a goal of a 1,500-strong student body by 2020.

He voiced optimism the school will once again enroll at least 300 new freshmen for the 2018-2019 academic year. If so, it would be the first time Louisiana College has enrolled 300 or more new freshmen for two consecutive years.

“Education that instructs the mind without deepening the soul is not genuine learning,” he said. “Our goal is to graduate students who make a difference for the common good with redemptive voices in the world.”

For his part, Louisiana Baptist Foundation Executive Director Wayne Taylor said the entity helps others understand that everything they own belongs to God.

He encouraged board members to help their respective congregations to learn benefits of giving to a Louisiana Baptist church or ministry.

“We just need to preach the truth, the message, to help people get the concept of what we are to really be as stewards and release a lot of resources so we can actually reach the people around the state,” Taylor said, “and at the foundation, we’re excited to be a part of that and help you in support the Children’s Home, the College and your church.”

During his report, Louisiana Baptist Children’s Home President and CEO Perry Hancock thanked individuals and churches for making a difference in the lives of children.

Hancock said the Children’s Home has additional ministry opportunities, including an opening for cottage parents to serve at its campus in Monroe.  He encouraged interested couples to contact his office at 318.343.8200 for more information.

He also reminded Executive Board members that the Annual Children’s Home Sunday Offering is June 17 and asked for their support in promoting it, which falls on Father’s Day.

“The Children’s Home is father to the fatherless,” he said. “Pray for us that day. Let your church know about their Children’s Home and if God leads you to be a part of the offering we would appreciate that.

For his part, Baptist Message Editor Will Hall provided updates on the paper’s operations and production, and, also covered key issues and developments in his work as director of the Office of Public Policy.

Regarding Louisiana Baptists’ newspaper, he made particular mention of the special tribute to Billy Graham in the March 8 edition, following Graham’s death Feb. 21.

“Many people across the country learned of Billy Graham’s special connection to Louisiana through stories about the coffin crafted for him at Angola,” Hall said. “But his connections to Louisianans were greater than that, including a 22-day Shreveport crusade in 1951, a 29-day New Orleans campaign in 1954, a five-day event in LSU stadium in 1970 and a one-day service in the Superdome in connection with the 1982 Annual Meeting of the Southern Baptist Convention; and, our archives show he conducted two more events in Louisiana than what are listed in the Billy Graham Evangelistic Association records.

“In 1954, he took one day away from his New Orleans campaign to preach in Baton Rouge before a crowd of 25,000, and 500 crowded to aisles during his invitation,” Hall said. “Importantly, in 1954 during the midst of the Shreveport outreach effort, he took a day to preach in front of an estimated 10,000 people at Louisiana College, and 300 people responded to the call of the Holy Spirit.”

Hall also gave a quick summary of key bills reflecting Louisiana Baptists’ values that have passed critical votes, and others opposing Christian values and beliefs that have been defeated.

In particular, Hall noted the success, so far, in keeping a slew of gambling bills from passing; and, he credited David Cranford, pastor of First Baptist Church, Ponchatoula, Louis Husser, pastor, Crossgate Church, Folsom, and Sherman Mack, member, Bethlehem Baptist Church, Albany, who is chairman of the Louisiana House Administration of Criminal Justice Committee, for one such successful effort.

“These three men stood like Shammah in the pea patch and took a stand to stop the placement of a riverboat casino in Tangipahoa Parish,” Hall said, referencing H.B. 438, which was aimed at relocating a gambling facility from Shreveport.

Waylon Bailey reminded board members they have a responsibility to become involved in God’s work despite the challenges faced.

Citing Acts 13, Bailey said churches must overcome the roadblocks to maintaining unity, and persevere against the challenges of how to reach cities and suburbs where an increasing number of the population is moving.

“We know that one of the reasons why we are struggling to revitalize churches is that some of those churches are in the open country where people simply don’t live in numbers as they did before,” said Bailey, pastor of First Baptist Church in Covington. “The other challenge is to revitalize churches in urban areas that need to be renewed. We need to view all people, rural and urban, as creatures of the Gospel, and focus on what we can do instead of what we can’t do.

“Before we can take any of those challenges, we have to make the choice,” he said. “As strong lay leaders in the church as well as pastors and staff members, we have to take the challenge of ‘Am I going to let Jesus truly be the Lord and the Master? Is it going to be His day?’”

President Eddie Wren closed the meeting by challenging pastors and their congregations to reach their communities and beyond with the Gospel. Before setting out on the Great Commission, believers should devote ample time in prayer for those they plan reach with the Good News.

PRAY After a time of prayer, Wren said God will then lead believers to develop a plan for evangelism.

PLAN “I think maybe one of the greatest problems that you and I have in sharing the Gospel is that sometimes we just don’t have a plan,” he said. “We just figure it’s going to happen. We go about our business and we get to the end of the week and we realize we have not shared the Gospel with anybody.”

PLOW Once that plan is developed, Wren said action must be taken by going into the harvest field and executing the plan. “We need to plow,” Wren said.

PERSEVERE Wren added that even in the difficult times, the Holy Spirit will help a Christian persevere and not give up in fulfilling the Great Commission.

“The answer to our churches’ decline is not in programs, it’s not in a different style of music, it’s not in the way we dress,” Wren observed. “The answer is in sharing the Gospel. If we would become a people who believe the book, and believe that the Gospel saves, and take that Gospel out personally, we will see a great abundance of souls saved by the power of the Holy Spirit

By Joe McKeever Freely you have received; freely give. (Matthew 10:8) JACKSON, Miss. (BP) -- Dr. Watson was complimenting Sherlock Holmes on a brilliant observation no one else had noticed. "Of course," Holmes remarked. "It's what I do." Forgiveness and grace -- that's what we believers do. Here is … END_OF_DOCUMENT_TOKEN_TO_BE_REPLACED