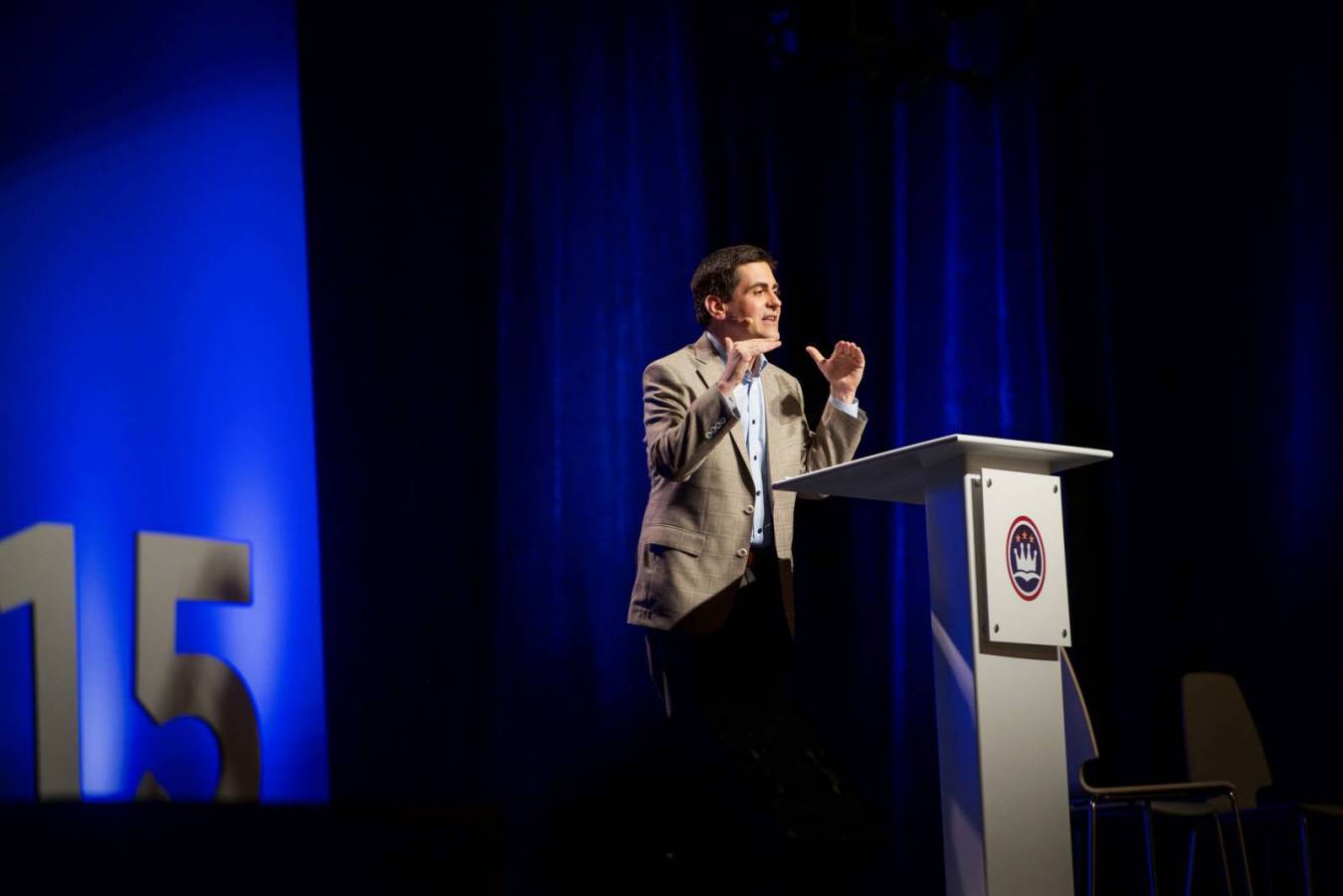 Russell Moore, president of the Ethics & Religious Liberty Commission, speaks during the ERLC’s "The Gospel and Politics" event Wednesday (Aug. 5) in Nashville. Photo by Alli Rader

NASHVILLE (BP) — Political engagement by evangelical Christians calls for a witness shaped by the Gospel of Jesus, Southern Baptists were told at a conference Wednesday (Aug. 5) in Nashville.Speakers at “The Gospel and Politics” — the second national conference sponsored by the Southern Baptist Ethics & Religious Liberty Commission — sought to help the more than 630 registrants think about how to approach politics in a changing culture a year before the next presidential election. The conference came a day after interviews of two Republican presidential candidates — Sen. Marco Rubio and former Florida Gov. Jeb Bush — by ERLC President Russell Moore at the Send North America Conference, an event sponsored also in Nashville by Southern Baptist missions entities.

The Gospel calls for a different tone than has been demonstrated sometimes in the past by evangelicals, some speakers said.

“I say this respectfully, the era of perceived, white, angry evangelicalism is officially over,” said Samuel Rodriguez, president of the National Hispanic Christian Leadership Conference. Impacting culture now “requires a multi-ethnic, kingdom culture canopy that reconciles truth with love,” he said during a panel discussion.

A shift to a more gracious approach in political engagement does not equal a shift in convictions, said Jim Daly, president of Focus on the Family, on the same panel.

“When I would meet with homosexuals or gay activists, what some Christian leadership accused me of was losing my principles,” he told attendees. “They had no clue what was going on in the meetings.”

Seeds were being planted for Gospel witness, Daly said. “And to have somebody rail against you because you’re doing the Gospel, there’s something not healthy about that, everybody. We don’t give up our principles to have a nice, kind, gentle tone.”

“If you’re going to follow Christ, you can’t do that by saying, ‘Okay, what’s my tribe, and how do I make sure that I am safely with my tribe all the time?’ Instead, you’re on mission with Christ,” he said, “which means you’re talking with people that disagree with you and doing so with conviction, but you’re also seeing that person as someone that you ultimately want to see reconciled to God.”

The church — the community created by the Gospel — plays an important role in evangelical political engagement, speakers said.

Christians “speak from consciences shaped by Scripture,” Moore told the audience. “We must see a community that is being formed as a sign — a sign that is shaping and forming consciences.

“If we are going to go forward in the 21st Century, we must understand that sort of community is of paramount importance in our mission,” he said.

“The worshiping, sending community carries with it a distinctiveness that gives us everything we have to say to the outside world.”

James K.A. Smith, author and philosophy professor at Calvin College, said during another panel discussion, “We worship a King. That’s a political category. [T]he church in its worship is actually where we learn to be citizens of the city of God.

“It’s really, really important that Christian worship ends with sending. The whole point of the people of God being gathered together is precisely” to be restored and sent out, he said.

Speakers and panelists offered advice to pastors regarding political engagement.

“Secondary political ideals are matters of first importance,” Greear cited as the first myth. He tells his church, “I might be wrong on my position about global warming, but I am not wrong about the Gospel. And I do not want my opinion on the first thing to get in the way of my preaching about the second thing.”

The other myths to be avoided, he said, are:

— “Christian truth does not apply to politics.

— “There is never a time to take a controversial political stand.

— “We see everything clearly.”

Regarding when to address issues from the pulpit, panelist D.A. Horton said, “Anytime the common good of humanity is under attack and human flourishing is being oppressed, then I believe that’s a red flag that we need to be addressing” from God’s Word.

Horton is a church planter who serves as national coordinator for urban student missions at the North American Mission Board.

On the same panel, Jimmy Scroggins told pastors, “We’re not going to be able to speak to every single issue with the same force.”

Scroggins is lead pastor of the Family Church in West Palm Beach, Fla.

David Platt, president of the International Mission Board, applied the Gospel to the human trafficking crisis.

Acknowledging there are no easy answers and no simple solutions to the epidemic, Platt said, “Fighting slavery begins with believing in the Gospel.”

Jesus “is the pursuing Savior, and as men and women who are identified with Him we need to pursue the enslaved,” said Platt, who added traffickers and pornography users also need the Gospel.

Among other speaking at the conference were Ross Douthat, columnist for the The New York Times; author Rod Dreher; Erick Erickson, editor of RedState.com; Michael Gerson, columnist for The Washington Post and former White House speech writer; Jennifer Marshall, vice president at the Heritage Foundation; and Karen Swallow Prior, author and English professor at Liberty University.

The ERLC’s inaugural national conference, held in October 2014, applied the Gospel to homosexuality and marriage.

Videos of the conference, which was held at Nashville’s Music City Center, will be available in the days ahead aterlc.com/videos.

By John Hebert, Louisiana Baptist missions and ministry team leader ALEXANDRIA, La. - “By faith Abraham, when he was called, obeyed by going out to a place which he was to receive for an inheritance; and he went out, not knowing where he was going.” (Hebrews 11:8) This verse describes the exercise of faith … END_OF_DOCUMENT_TOKEN_TO_BE_REPLACED