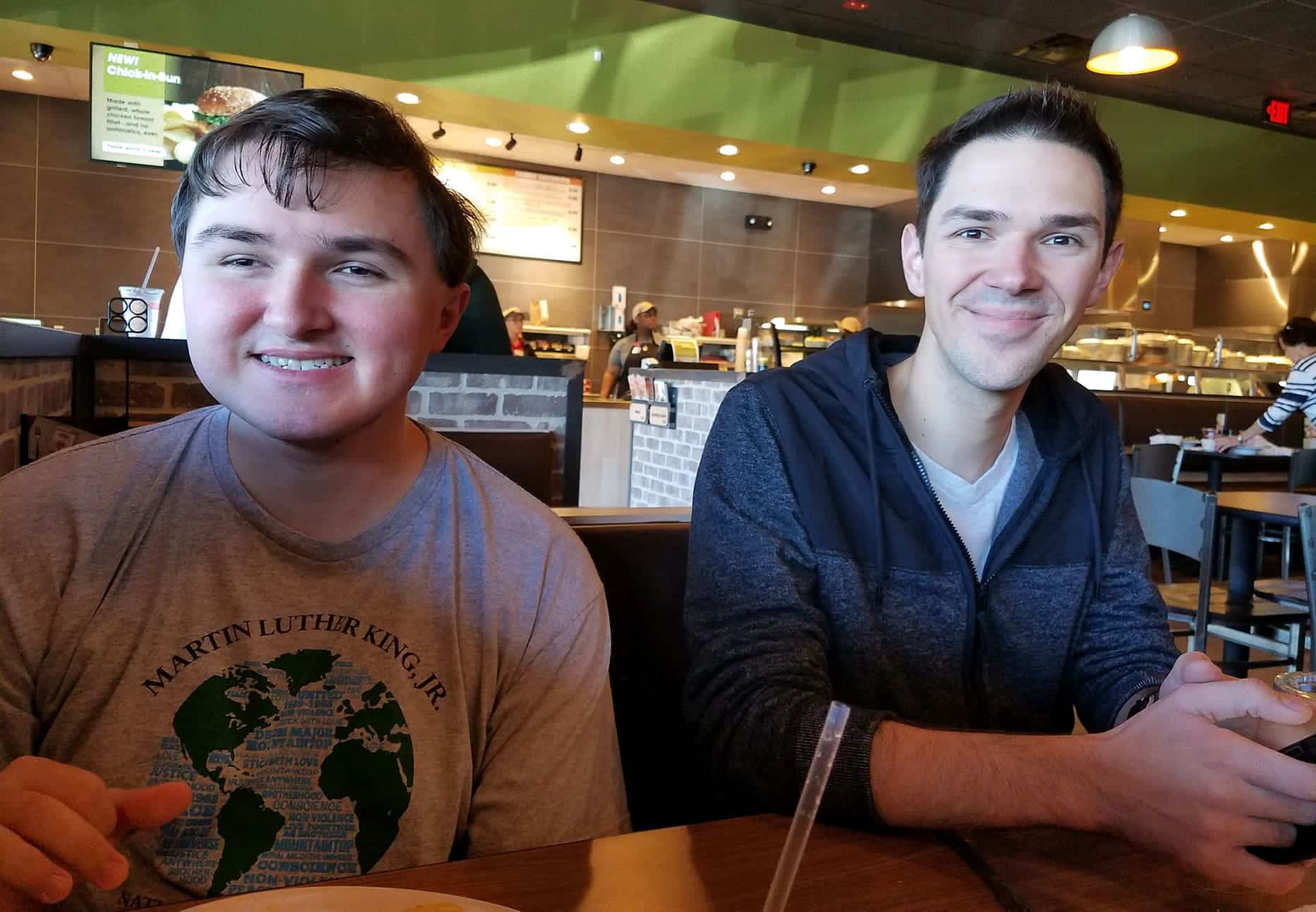 Graham (left) and Joe Waller, pictured in a family photograph during happier times, are coping with the isolation brought on by COVID-19. The brothers, both students at New Orleans Baptist Theological Seminary, are adjusting to new realities and alternative educational platforms. Submitted photo

Graham, blind since childhood, continues with his Leavell College classes online, listening to lectures in two classes and logging in for voice lessons via social media.

Joe, a doctor of philosophy (Ph.D.) student in theology, sees advantages in the all-online format such as a sense of togetherness in classroom discussion now that everyone is online rather than a few joining as distance-learners.

Both know the times are filled with uncertainty.

For Graham, the isolation brings some loneliness. He misses interacting with others on campus and at his volunteer job at New Orleans’ WWII Museum, a favorite pastime that fits with his love of history. For Joe, his on campus job is “on hold.”

Still, Joe and Graham believe God is at work.

“My mom is always saying, ‘God doesn’t waste anything,'” Graham said. “He’s going to use this somehow.”

Author of the book of poetry “As I Learn to Walk,” Joe penned the poem “At The End” weeks before the outbreak, a reminder to readers that God brings good out of bad times. The poem reads: “How many hours of testing will reveal themselves to be the reasons for our joys? … How many things seemed only to offend but deepened both my love and faith in you?”

Graham misses the coffee shop he frequently visited close to his off-campus home. It is now closed.

With the WWII museum closed as well, Graham misses working with other volunteers and his opportunities to talk with WWII or Vietnam War veterans.

“Even if I didn’t get out much before this started, the fact that I can’t get out now is weighing on me,” Graham said.

But Graham has been through tough times before.

The brain tumor that robbed him of his sight came when he was a child. A verse he learned in Bible drill, Psalm 56:3 — “What time I am afraid, I will trust in You” — helped him through the difficult time.

Graham wrote an article sharing his story for a recent issue of “Exceptional Times,” a magazine published by a New Orleans organization that supports people with disabilities.

In the article, he shared that as realization came that he would be blind, his family encouraged him saying, “With God’s help, we can figure out how to live with this.”

At the end of the article, Graham admitted he has questions still about his future, but that he never forgets lessons learned in the past.

“I have faced difficult and discouraging times,” Graham wrote. “But God is always faithful.”

As youth minister at Poydras Baptist Church in the New Orleans area, Joe serves alongside members who were greatly affected by Hurricane Katrina and who know loss and uncertainty.

“They are some of the most servant-hearted people I’ve ever met,” Joe said. “They are humble and very giving. Their faith is real.”

During these uncertain times, it is important to remember that God is in control, Joe explained. He noted that believers can see this time as an opportunity to “really focus on and listen to the Lord,” he said, adding that his goal is to use the time in that manner.

“I absolutely believe that God has plans in this and is doing things we may not be able to see right now,” Joe said.

For Graham, blessings he’s experienced in the past such as a mission trip to Romania, or trips to New York City and Miami with other seminary students, will someday come again, because God is faithful.

“I can trust Him with whatever fears I may have,” Graham said. “With my blindness, there was a lot uncertain, and now it’s even less certain. I could choose not to trust Him, but looking back, He’s never failed before. I’ve got no reason to believe He will fail me now.”

By Joe McKeever “‘…your ways are not my ways,’ saith the Lord.”  (Isaiah 55:8) Keep an eye on how the Lord works in your life. You might learn something useful for the next time He wants to use you. This little couplet seems to sum up 90 percent of what Scripture and life teach us concerning the operation … END_OF_DOCUMENT_TOKEN_TO_BE_REPLACED