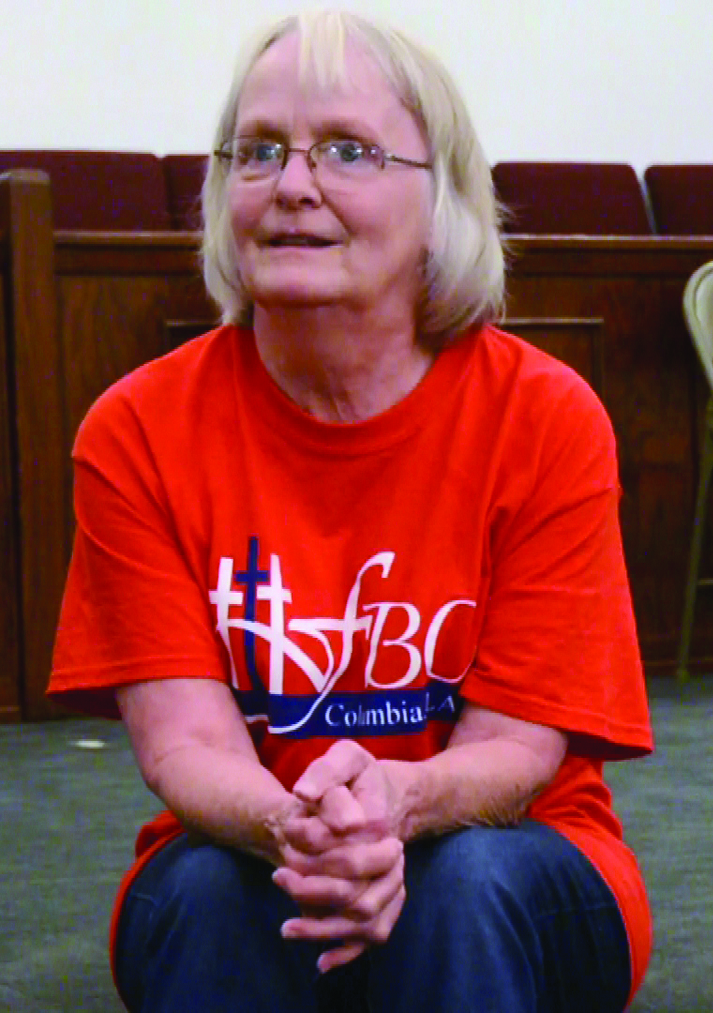 HEBERT – One never knows how or when God will intervene.

Kay Vinson, a member of First Baptist Church in Columbia, could see the despair in a young woman’s face as Vinson approached the girl’s vehicle on a Sunday evening in early March. She admitted to Vinson she was thinking about suicide.

Vinson said just really did not know what to say, so she just allowed God to speak through her and the distraught woman eventually decided not to end her life.

For Vinson it was a vivid reminder how God could use anyone for His Glory.

The situation unfolded in early March, when Vinson and a fellow member of First Baptist Church in Columbia arrived in a driveway and encountered the woman.

When the young woman discovered the First Baptist Columbia members were  placing signs in yards as part of the Campaign for Christ effort, she  immediately wanted to visit with them and question them about the hope they found in Jesus.

Vinson said the woman described herself as a believer who had strayed away from her faith. The woman shared about her failed marriage and two previous attempts to commit suicide and she was contemplating trying a third time.

When the conversation ended, the woman expressed her appreciation for the visit and the divine encounter Vinson said.

“She asked us how we knew  a visit was what she needed at that exact moment,” Vinson recalled. “She was at the point where she believed she had done so many bad things that God couldn’t forgive her. We told her nothing can keep her from God’s grace and mercy.”

Vinsons described how the demeanor of the woman immediately changed from despair to hope.

“That is something I needed at that moment,” Vinson said. “To know He could take little old me who strayed herself and got back to where I needed to be was a blessing.”

Vinson admitted she would not have been so bold to share her faith  five years earlier.

Though she was raised in a Christian home and believed at an early age, Vinson confessed that as the years passed, attending church, reading her Bible daily and witnessing to others became less of a priority.

As time marched on, Vinson said  dissatisfaction at work increased and she knew a change was needed.

During a break on the job work in May 2012, she found a Gideon’s Bible and began reading 1 and 2 Corinthians. The more she studied the Bible, the more she realized now was the time for a change, she said.

“One day, I just quit and walked out,” she said. “I prayed about it and the Lord provided.”

She encouraged others who have strayed from Christ to return, saying it is never too late to turn back to God and have a fresh start.

“Unless I gave it all to God, I would still be in that room at work and wishing I could make a change,” Vinson said. “But I gave it all to Him. And that’s a decision I never have regretted to this day.”

By David Jeremiah EL CAJON, Calif. (BP) - Something strange happens to the psyche of a nation in difficult times. The downtrodden begin to resent government and wealthy corporations and individuals, seeing them as out of touch with, if not the cause of, their plight. Desperation can lead to a reversal of … END_OF_DOCUMENT_TOKEN_TO_BE_REPLACED