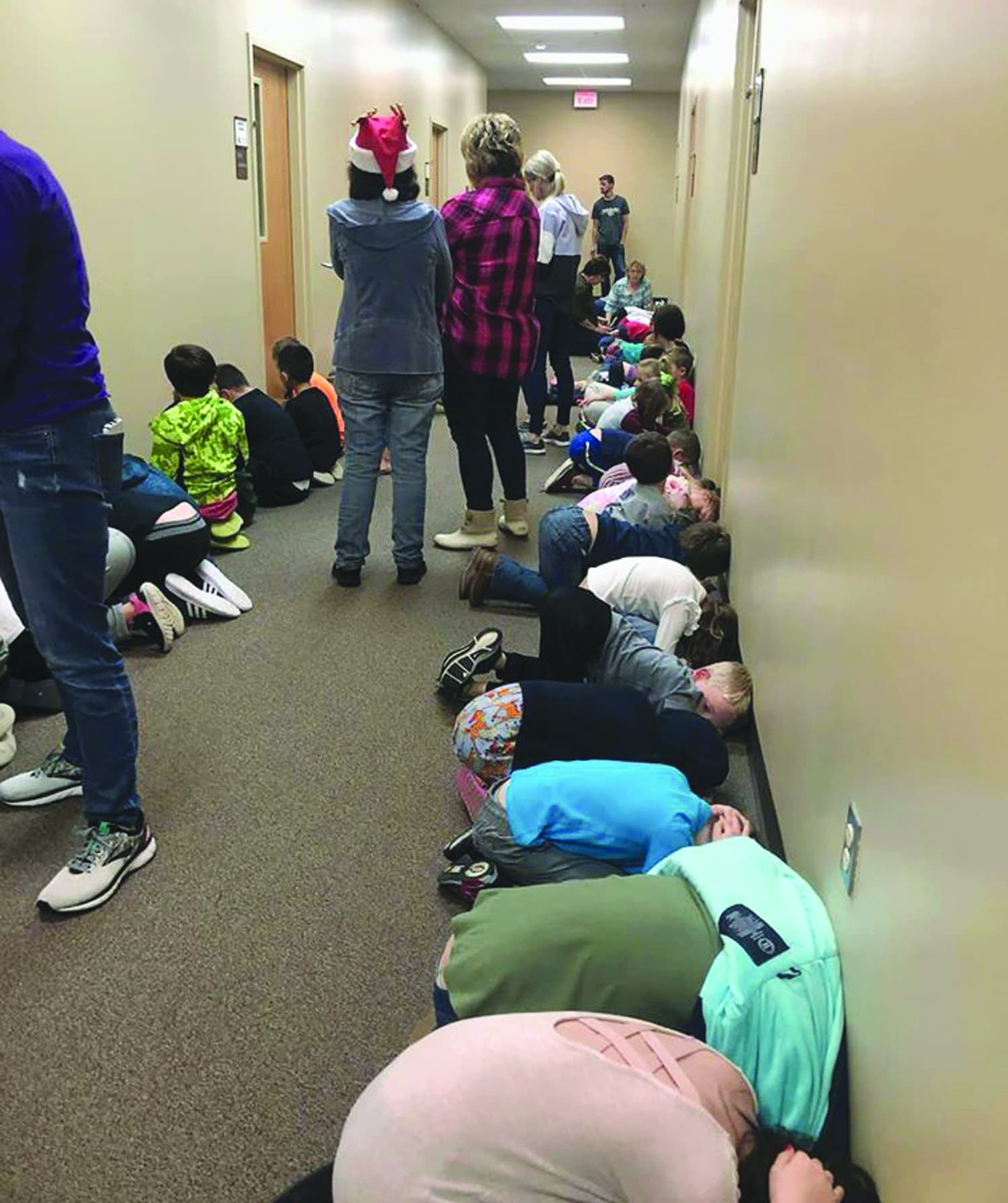 Teachers and staff at First Baptist Academy in DeRidder gathered students in a protected hallway in First Baptist Church, DeRidder and sang Christmas carols, hymns and prayed with the children as a killer tornado passed less than a quarter of a mile away.

Rejoice in the Lord always; again I will say, rejoice. Philippians 4:4

DERIDDER, La. (LBM) – Monday, December 16, began like most at First Baptist Christian Academy with the students and staff in assembly to recite all three pledges, say a prayer, and listen to a morning devotional.

“On this particular day our devotional came from Philippians 4:4 in which we are instructed to not be afraid and that joy is the cure to all fear. We learned that to call on Jesus with joy and he will bring us peace in the midst of our storms.”

Unbeknownst to Turner or her staff they would shortly be putting those words to use.

Let your reasonableness be known to everyone. The Lord is at hand; do not be anxious about anything, but in everything by prayer and supplication with thanksgiving let your requests be made known to God. Philippians 4:5-6.

The first alert came shortly after mid-morning as teachers began to receive weather warnings on their cell phones. As they had practiced, the teachers calmly gathered the students, 60 from the Academy and 50 more from the weekday pre-school, and took them to the inner halls of the church.

The staff had the children get into position on their knees and cover their heads.

“The children may have been a little scared because there was a lot of lightning, thunder and heavy rain, but they remained so calm,” continued Turner. “And my teachers and staff were just amazing as they walked up and down the hall comforting the children. They (staff) just blew me away.”

“The FBC staff was amazing,” said Turner. “They checked on us constantly and helped us to feel safe.

And the peace of God, which surpasses all understanding, will guard your hearts and your minds in Christ Jesus. Philippians 4:7

To keep the children’s minds off of what was taking place outside, the teachers led the students in Christmas carols starting with Silent Night.

“The children were singing Christmas carols at the top of their lungs,” said First Baptist Church Pastor of Administration Dan Batchelor. “They did a great job of drowning out the noise from outside.”

Turner agreed, “They sang one Christmas carol after another … one Bible song after another. The children sang along with their little heads down and on all fours. As they were singing “This Little Light of Mine, their little fingers were waving in the air even while their heads were down.” Between the songs, teachers and children were praying.”

While the children sang, less than a quarter of a mile away, a killer tornado passed by the church and the school. Those standing near the door could see the wind and debris and plainly hear the tell-tell sound made by the passing tornado. 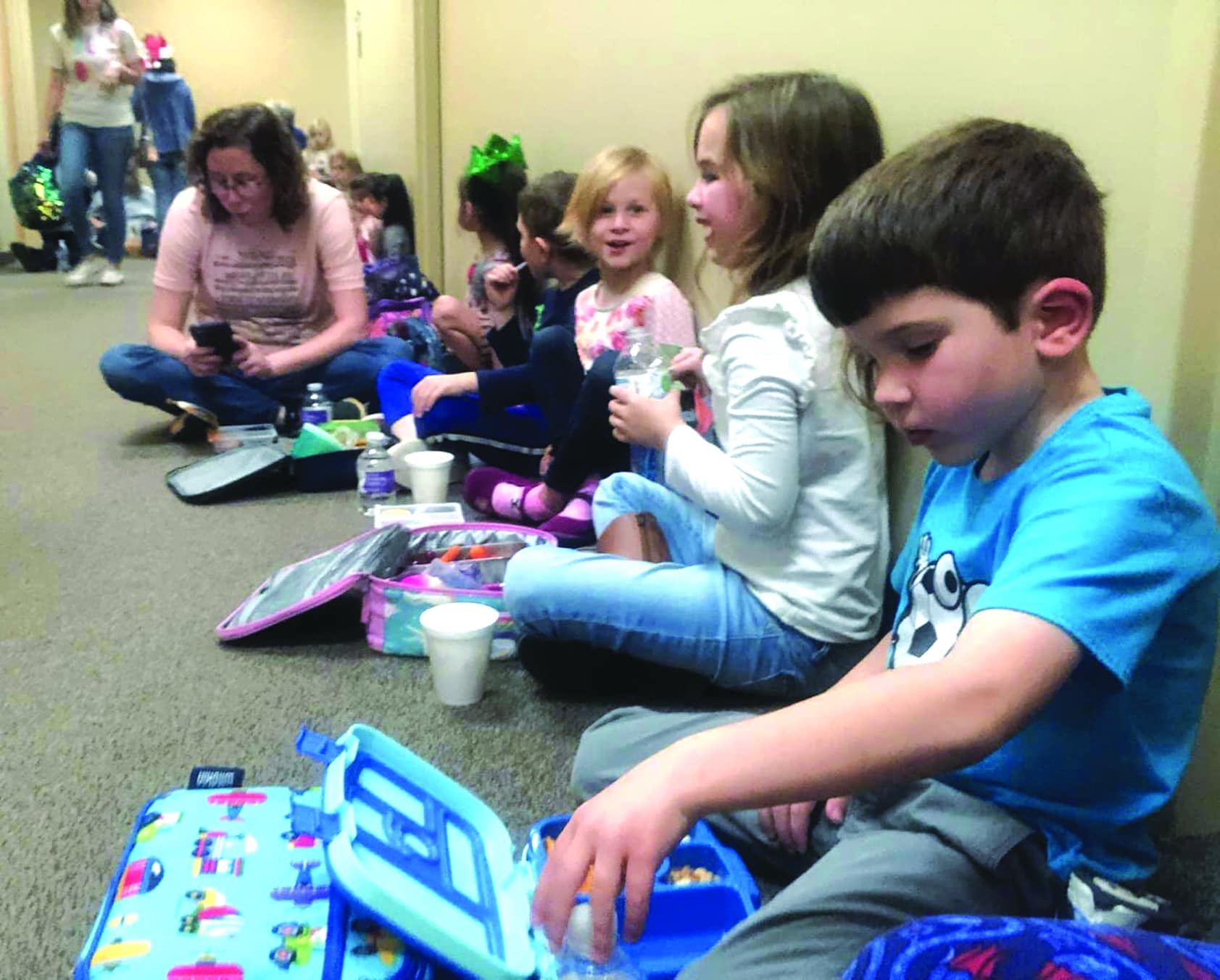 Children at First Baptist Academy in DeRidder had a picnic in a secure hallway during a December 16 storm in which a tornado passed less than a 1/4 of a mile away from the school and church.

“The first alert lasted about an hour before the all clear was given. We sent the children back to their class,” said Turner. “Many were hungry and got their snacks and lunches out and began to eat.”

However, less than five minutes later a second alert sounded and the children were quickly returned to the hallway.

“Have I not commanded you? Be strong and courageous. Do not be afraid; do not be discouraged, for the Lord your God will be with you wherever you go.” Joshua 1:9

“When we returned to our area once again, we were instructed to shelter in place,” said Turner. “Our staff sang some more Christmas carols and played some games with the kids to help them stay calm. We let our teachers go and get their lunches and we had a picnic in the hall.”

Several parents arrived to pick up their children but Hager could not let them leave as it was not yet safe outside. He brought them to the safety of the church.

Several hours would go by before the all clear was given and it was safe for the parents to come pick up their children. Though the 110 children and teachers were tired, emotionally spent and ready for the day to be over, everyone was safe.

“I have been an educator for 27 years and an administrator for the last 12,” said Turner. “I have never experienced anything like Monday. I believe with all my heart that God laid his protective hand over these children and this school because we lifted Him up.

Peace I leave with you, my peace I give unto you; not as the world giveth, give I unto you. Let not your heart be troubled, neither let it be afraid. John 14:27

“We sang to Him. We prayed to Him. We trusted Him,” said Turner. “And He brought us peace, strength and protection. God is so GOOD!”

The following day at the morning assembly the students gathered and recited the three pledges, prayed and listen to a morning devotional. It was from Psalms 5:11 – But let all who take refuge in you rejoice; let them ever sing for joy, and spread your protection over them, that those who love your name may exult in you.”

“The next day when we did our devotional I really could not believe it when the devotional was read. I, and many of my staff, began to cry,” said Turner. “It was so fitting to what had taken place the day before. We took refuge in our Lord, we sang to Him in joy and He spread his protection over us.

“I have heard from so many people just how hard it was Monday,” Turner said. “The storm claimed the life of one of our FBCA families who lost a loved one as a result of the storm. The tornado also caused so much destruction in its path. I and all of my staff truly thank God for his protection.”

By John Hebert, Louisiana Baptist missions and ministry team leader ALEXANDRIA, LA. (LBM)--Do you know what Winston Churchill, Bill Gates, Walt Disney, and Colonel Sanders have in common? It has nothing to do with their fame or notoriety, I would suggest. Instead, it is the trait that I contend was the cause of … END_OF_DOCUMENT_TOKEN_TO_BE_REPLACED