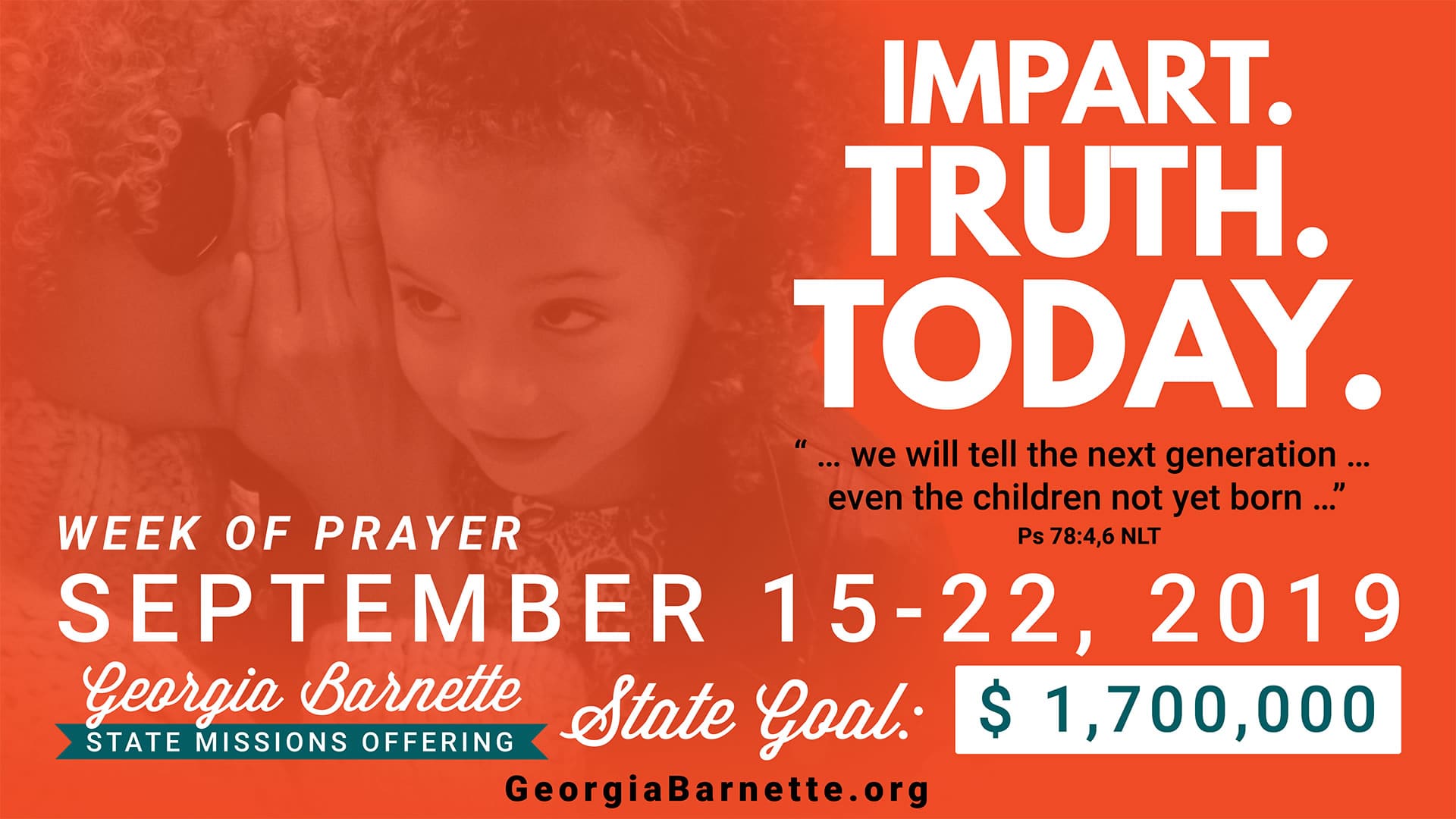 “Truth has been under assault since the beginning of creation,” according to Steve Horn, newly elected executive director for Louisiana Baptists. “When Satan first uttered these words to Eve in the garden, he opened an attack on truth that has only intensified with time.

“In fact, some researchers have labeled this period in history as ‘Post Truth,’” Horn continued. “A Barna survey in 2018 indicated just over one-third of Americans, 35 percent, believe in absolute truth.”

It is against this backdrop that Louisiana Baptists have launched their 2019 Georgia Barnette State Mission Offering emphasis, “Im-part. Truth. Today,” taken from Psalms 78:4, 6, “… we will tell the next generation … even the chil-dren not yet born …” (NLT).

“As we read, listen and scroll through the news, we’re reminded daily that our world is in need of a Savior,” said Cameron Mullins, a member of First Lafayette and cur-rent president of the state WMU Council. “Having served on the State Missions Offering committee for several years, I have personally seen the impact the offering has made on our state.”

Reaching out to the audiences identified by the 2013 President’s 2020 Commission (“every people group” and “the next generation”), continues to be a focus of Louisiana Baptists’ cooperative missions and ministries across the state:

— Greater New Antioch Baptist Church in Monroe is a replant on the campus of the former College Place Baptist Church. Led by pastor John Russell, the congregation has seen 30 new members join in the fi rst nine months in the new location.

Currently meeting in the gym of the Florida Boulevard Baptist Church, his vision is to plant a multiethnic, multi-generation church by meeting people at their point of need. Renew baptized eight people, including five youth, during the first five months of 2019.

— With the peak of the Atlantic hurricane season ahead, Louisiana Baptist disaster relief volunteers have already been deployed five times this year, responding after the tornadoes in Ruston, Hurricane Barry and other incidents inside and outside of Louisiana. More than 300 new volunteers have been traine to date.

— Louisiana Baptists are grabbing “screen time” across the state via their multi-media evangelism strategy, Here for You. With the goal of getting God’s truth inside every heart and every home almost every day, Louisiana Baptists are utilizing various communication platforms to accomplish this goal. More than 750,000 people saw the Here for You commercial during the Super Bowl in February and there have been over 1,900 views of the online Gospel presentation at HereforYou.org between April and July. These views have generated in excess of 370 decisions thus far.

Other missions and ministries supported by gifts to the GBSMO include:

— English as a Second Language (ESL)

Linda Canady, a member of the First Baptist Church in Pineville, realizes the urgency behind this year’s offering. “As a grandmother to nine grandchildren, I am more and more aware of how little time we have to impart truth,” she noted. “They grow up so fast and we have to share our faith now, today, while there is still time.”

This year’s goal is $1,700,000, all of which is designated for Louisiana Baptist missions and ministries. Resource packets have been mailed to all 1,600 Louisiana Baptist congregations and the emphasis will run through September.

Videos, sermon outlines, promotion ideas and other resources can be found online at GeorgiaBarnette.org.

“The timing of this years’ s theme is no accident,” Horn concluded. “Only truth, God’s truth, can generate the change of heart that is so desperately needed in our culture and in our homes.”

By John Hebert, Louisiana Baptist missions and ministry team leader ALEXANDRIA, LA. (LBM)--Do you know what Winston Churchill, Bill Gates, Walt Disney, and Colonel Sanders have in common? It has nothing to do with their fame or notoriety, I would suggest. Instead, it is the trait that I contend was the cause of … END_OF_DOCUMENT_TOKEN_TO_BE_REPLACED