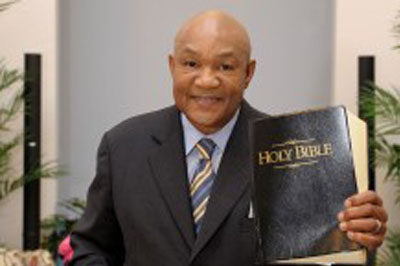 George Foreman and his Bible. www.georgeforeman.com/SPECIAL

People got killed every weekend in the bloody Fifth Ward of Houston, TX where George Foreman struggled to find his way as a troubled teenager. With a menacing manner and imposing physique Foreman became a bully and a mugger.

Either by fate or the providence of God, Foreman found his way into a new government program called Job Corps. Charles “Doc” Broadus, a counselor and boxing coach, inspired Foreman to turn that big chip on his shoulder into punching prowess.

Incredibly, in 20 short months Foreman went from being a no-name novice to becoming the world heavyweight amateur champion. Waving a small USA flag as the new heavyweight boxing gold medal winner was Foreman’s “Kodak moment” at the 1968 Olympics in Mexico City.

By Chuck Kelley Rarely does Hollywood contact a Southern Baptist seminary, but rarely is not never. One day location scouts for a major motion picture to be filmed in New Orleans called NOBTS and asked to tour the campus. They were looking for a place that with a bit of movie magic could be made to look like the … END_OF_DOCUMENT_TOKEN_TO_BE_REPLACED