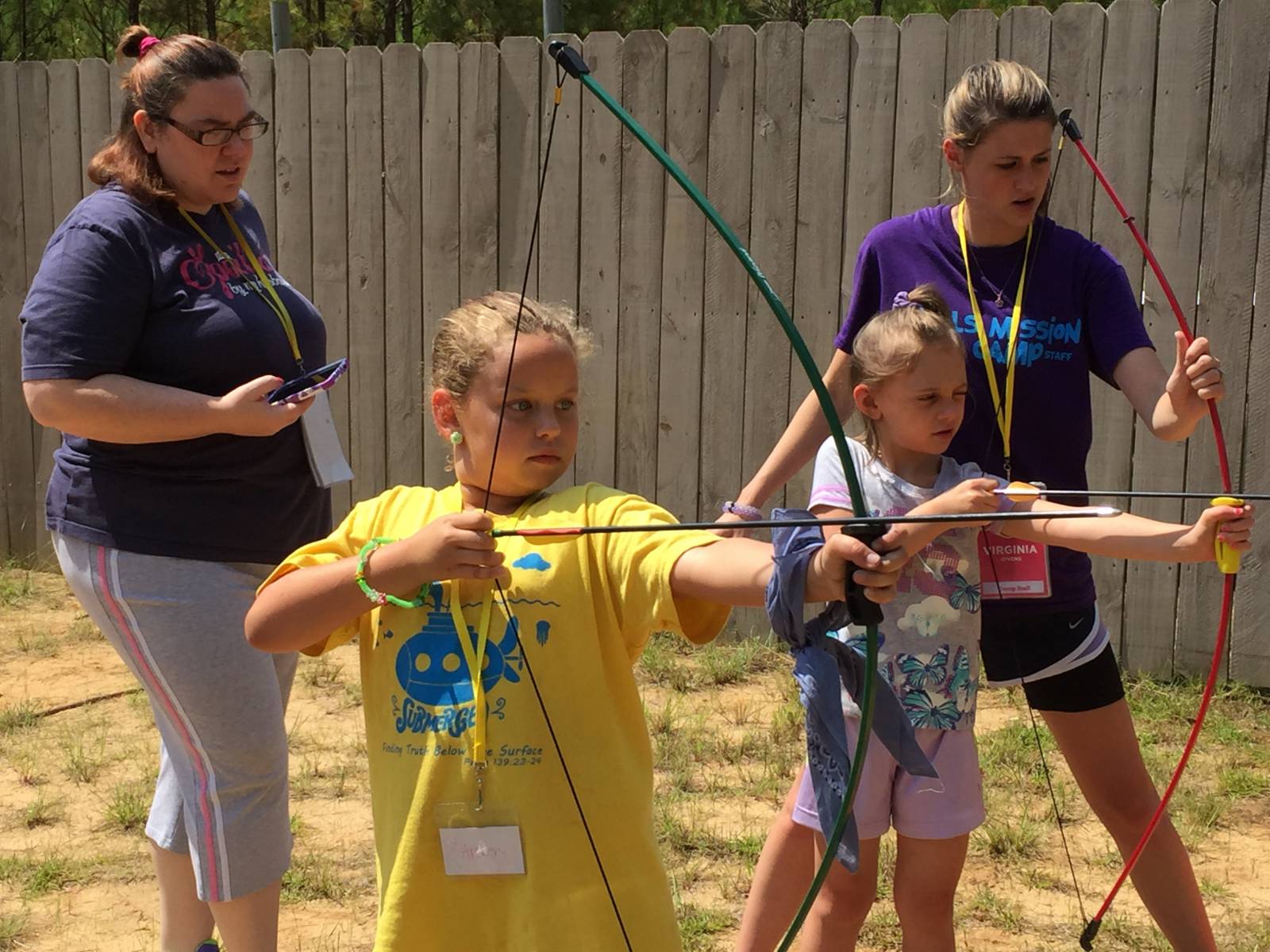 Participants in Girls Mission Camp aim for the bull's eye during an archery session.

So when she was given a chance to serve as a leader for Girls Mission camp years later, Miller quickly accepted the job.

“GA Camp was such a blessing to me. I made so many memories when I went,” said Miller, a member of Alto Baptist Church in Rayville. “The staff strengthened my walk in Christ and I wanted to do that for the other girls. It’s fun to see the campers grow closer to Christ and it’s a reminder of good times I had as a GA.”

Alto was one of 23 staff members who are leading 233 campers and sponsors at the annual Girls Mission Camp, which began July 23 and ends July 27. The camp’s theme is “Run the Race,” based on 1 Timothy 4:8.

Campers are participating in drama, archery, missions, crafts, swimming and Bible study sessions. They also are learning from retired missionaries who are retired and currently reside stateside, hearing inspiring messages from camp pastor Brandon Digilormo and taking part in worship led by Kristen and Kellie Fuselier.

Jess Archer, children and youth missions education strategist for Louisiana Baptists, said the hand of the Lord is evident on the campers this week.

“The students are very excited to be here and we are anticipating what the Lord will do in and through all that happens at camp,” Archer said. “Since this is a missions’ camp and we emphasize missions and allow the girls to meet missionaries, they get to understand why the Great Commission is so important.”

Among those enjoying their time at camp was Aylissa Worley, a sixth grader from New Prospect Baptist Church in Dry Prong.

“The best part has been the worship because we are getting to show God that we love Him,” Worley said. “Also, interacting with new friends is something I’ll remember for a long time to come.”

Delana Mason, a fourth grader from Mount Union Baptist Church in Spearsville, has enjoyed the way the camp staff has made learning about Jesus and missions such an enjoyable experience.

“They’re using lots of games for us to learn about Jesus, which I love,” Mason said. “If we believe and trust in Him, then we get to be with Him after this camp, and into eternity.”

By Joe McKeever Freely you have received; freely give. (Matthew 10:8) JACKSON, Miss. (BP) -- Dr. Watson was complimenting Sherlock Holmes on a brilliant observation no one else had noticed. "Of course," Holmes remarked. "It's what I do." Forgiveness and grace -- that's what we believers do. Here is … END_OF_DOCUMENT_TOKEN_TO_BE_REPLACED