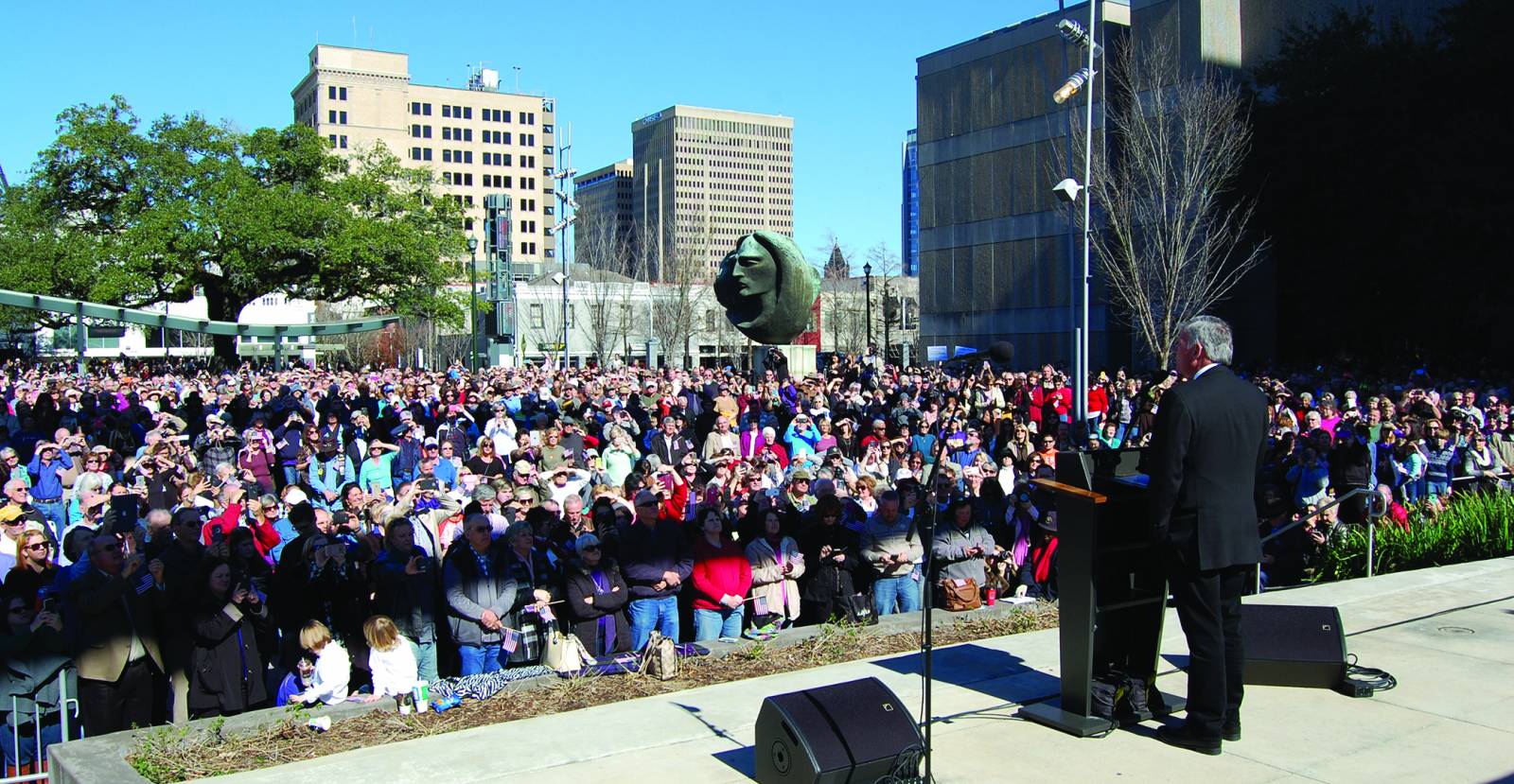 A crowd of 3,000 to 4,000 heard Franklin Graham declare "the state of the union is broken" during his "Decision America Tour" stop in N. Blvd. Town Square in downtown Baton Rouge on Jan. 13. He exorted the audience to "fervently pray for America." Photo by Mark H. Hunter

BATON ROUGE – The day after President Barack Obama delivered his last State of the Union speech, evangelist Franklin Graham on Wednesday told an estimated 3,000 to 4,000 people packed into the North Boulevard Town Square, “the state of the union is broken.”

Graham is preaching in all 50 states in the coming months, calling America back to biblical values, encouraging Christians to stand firm for their faith and to get involved in the political process as part of his “Decision America Tour.” Baton Rouge was third stop on the schedule where, in most places they are holding rallies on the state’s capitol steps.

“We’re here today because we see that our nation is in trouble – that’s the state of the union,” Graham declared as the crowd cheered and many waved miniature American flags. “We are in trouble spiritually, racially, economically and we’re in trouble politically. No political party is going to be able to turn this thing around – only God can fix it.”

Using the prophet Nehemiah as an example, Graham described how the Jewish remnant left in Jerusalem, after it was destroyed by the Babylonians,  rebuilt the walls in 52 days.

“The walls of America are crumbling,” he said. “Our moral walls are down. Our politicians, our educators and our pastors are more concerned about political correctness than God’s truth and righteousness.”

“The most important thing we can do is pray,” Graham said, and asked the audience to pray – out loud – for repentance of America’s sins of abortion, same sex marriage “a sin against God,” and the entertainment industry that’s filled with sex and violence. For several minutes the plaza was filled with voices, some quiet and others loud and earnest.

The group then prayed again, silently this time, in confession of personal sins, and a third, silent prayer confessing “the sins of our fathers.” 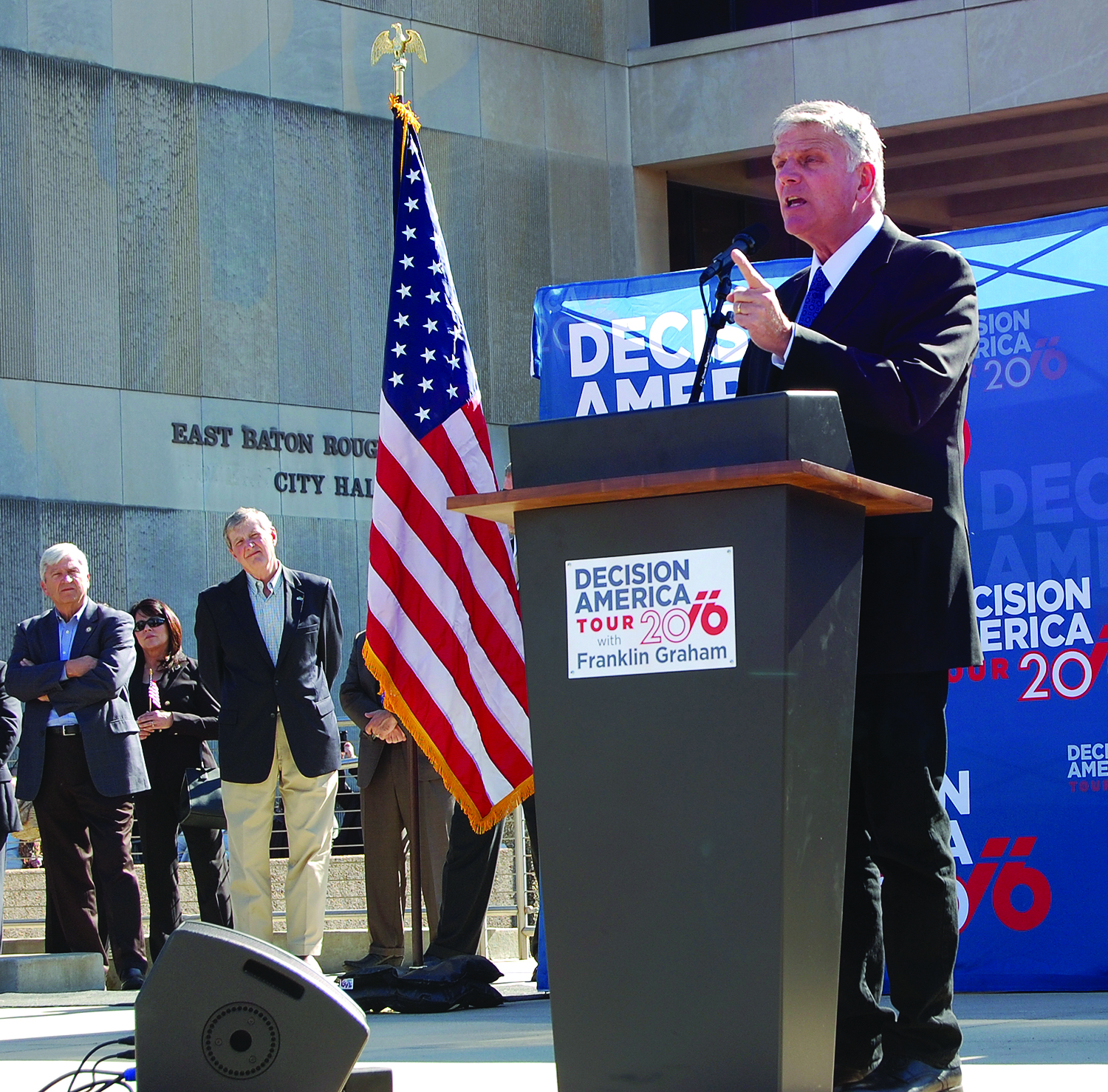 Graham told the crowd, “God loves you,” but reminded them that the Bible says the wages of sin is death.

Turning to political issues, Graham told how as he was growing up in the ‘fifties and ‘sixties America was a more moral nation that changed when “secularism crept into our government and society.”

“There is no difference between secularism and communism,” Graham said. “They are both godless. The secularists are led by people with very appealing names like ‘progressives.’ If you ever hear someone say they are progressive you better watch out. They most likely oppose the standards of God.”

He read a pledge that called for; living by biblical principles in the home,  honoring God in public by serving those in need and serving on political boards and governments, to honor God with the vote by supporting candidates who uphold biblical principles, and to vote and pray fervently for America.

Graham told anyone who wanted to sign the pledge digitally to get out their smart phones and dial 51555 and text “America.” Many in the crowd did.

After the rally Graham met briefly with local reporters.

“It was a great crowd, a lot of energy, a lot of excitement,” Graham said. “Can you imagine if every community in Louisiana had a group of people praying for their community and for their country and for God to bless us?”

By Lane Corley Olive trees produce one of the most desired and sought after fruits around the world. The trees can live for thousands of years. The olive and the olive tree is spoke of in the Bible on numerous occasions. Including a few references to family life, like in Psalms 128:3 – “Your children will be … END_OF_DOCUMENT_TOKEN_TO_BE_REPLACED