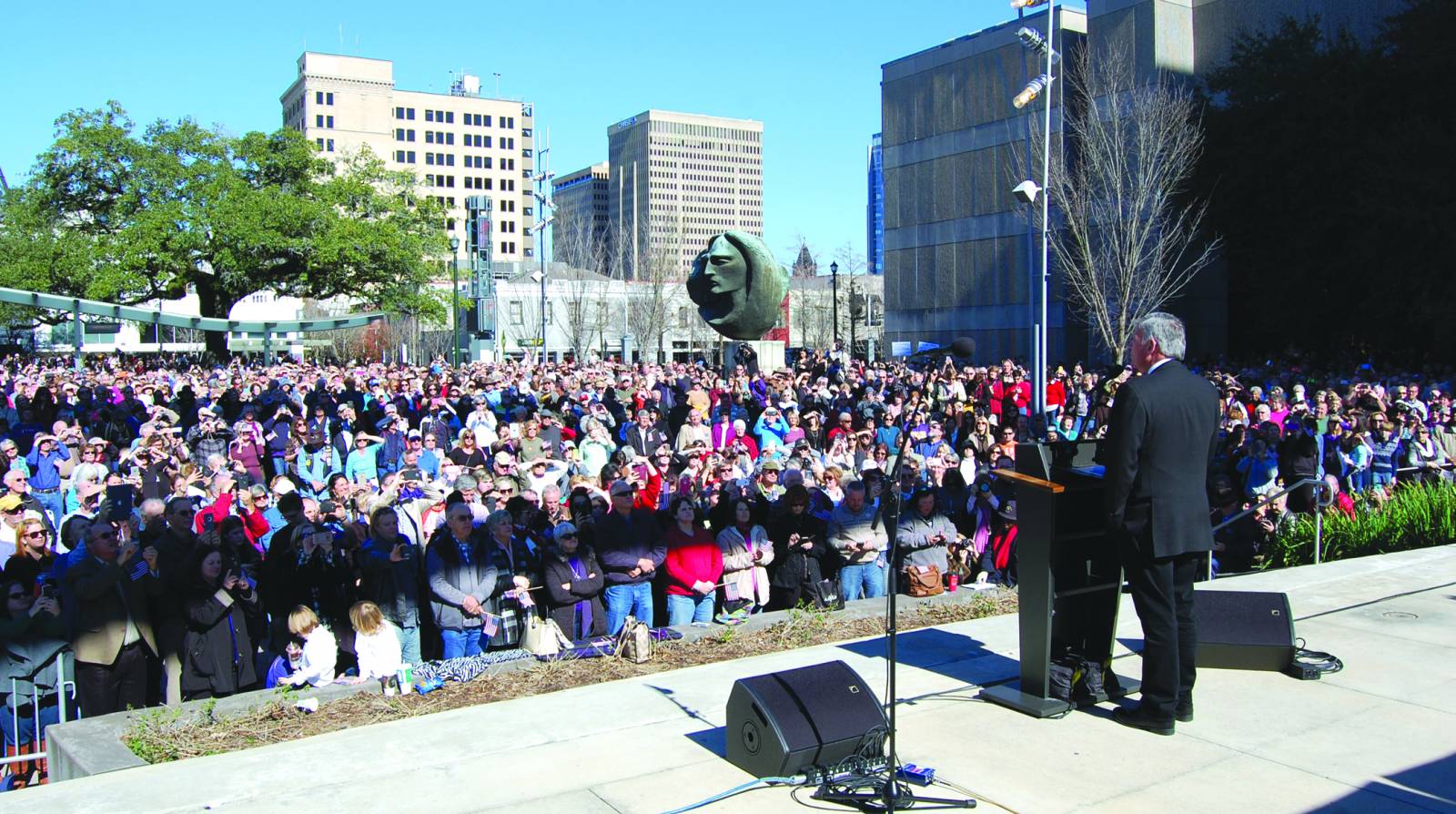 A crowd of 4,200 heard Franklin Graham declare “the state of the union is broken” during his “Decision America Tour” stop in N. Blvd. Town Square in downtown Baton Rouge on Jan. 13. He exhorted the audience to “fervently pray for America.”

BATON ROUGE – The day after President Barack Obama delivered his last State of the Union speech, evangelist Franklin Graham declared, “the state of the union is broken.”

Graham spoke to an estimated 4,000 Louisianans in the capital city’s downtown N. Blvd. Town Square Park, as part of his ambitious 50-state “Decision America Tour” calling the nation back to biblical values, encouraging Christians to stand firm for their faith and to get involved in the political process.

“We’re here today because we see that our nation is in trouble – that’s the state of the union,” Graham declared as the crowd agreed – many waving miniature U.S. flags.

“We are in trouble spiritually, racially, economically and we’re in trouble politically,” Graham said. “No political party is going to be able to turn this thing around – only God can fix it.” 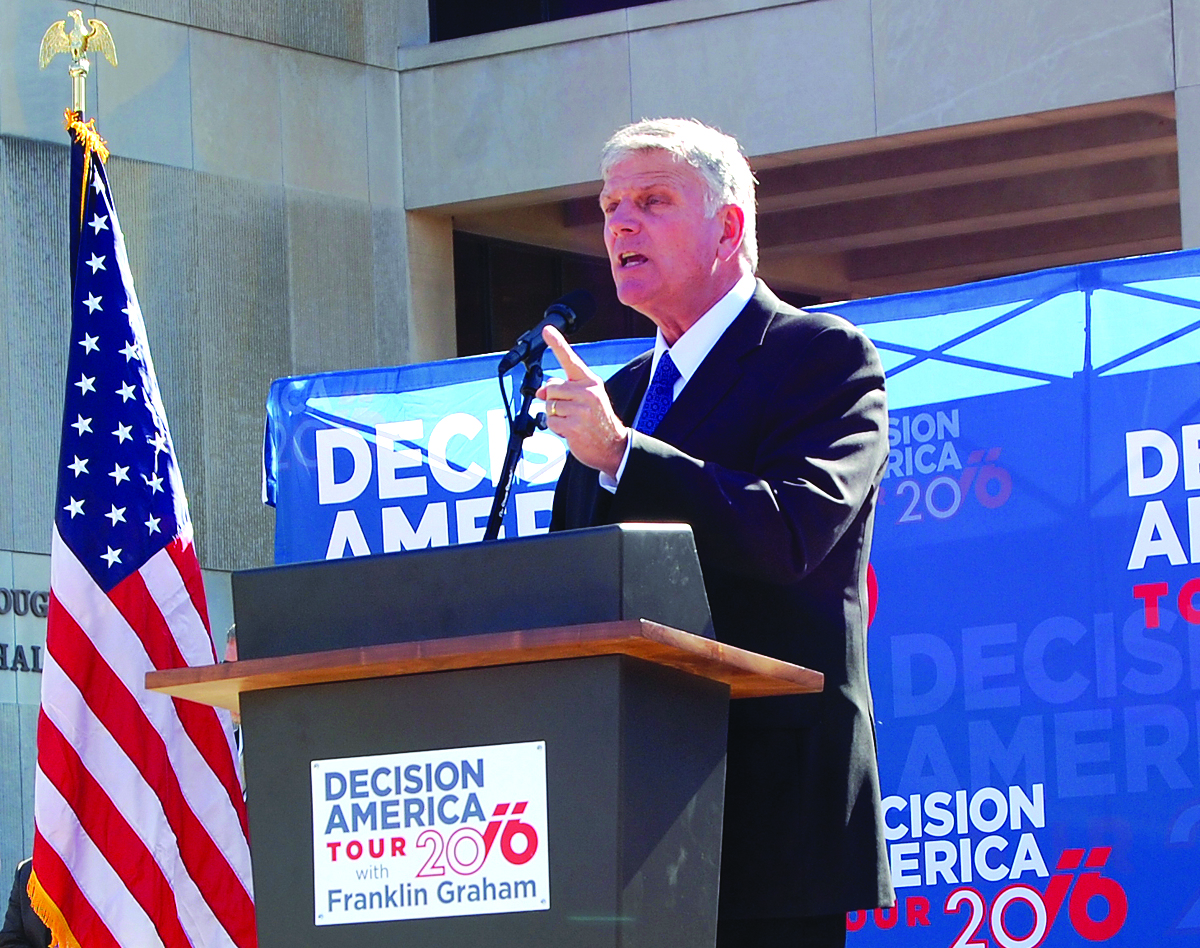 Graham described how Nehemiah and the Jewish remnant rebuilt Jerusalem’s walls – destroyed by the Babylonians – in 52 days.

“Our moral walls are down,” he said. “Our politicians, our educators and our pastors are more concerned about political correctness than God’s truth and righteousness.”

“The most important thing we can do is pray,” Graham said. He asked the audience to pray three times; once out loud for repentance of America’s sins of abortion, same sex marriage – “a sin against God,” he said – and the entertainment industry that churns out sex and violence.

The plaza buzzed with voices, some soft and others loud.

Graham presented a concise, simple plan of salvation, and said, “no matter what else you remember from this today – remember that God loves you.”

“Jesus Christ said, ‘I am the way, the truth and the life.’”

He lamented how secularism has changed America since he grew up in the 1950’s and ‘60’s.

“There is no difference between secularism and communism,” Graham said. “They are both godless. The secularists are led by people with very appealing names like ‘progressives.’ If you ever hear someone say they are progressive you better watch out. They most likely oppose the standards of God.”

He read a pledge that called for: living by biblical principles in the home; honoring God in public by serving the needy; getting involved in local governments and school board; and, voting for candidates who uphold biblical principles.

Graham told anyone who wanted to sign the pledge digitally to get out their smart phones and dial 51555 and text “America.” Many in the crowd did.

He also encouraged everyone to go home and form small groups to continue to pray for the nation. 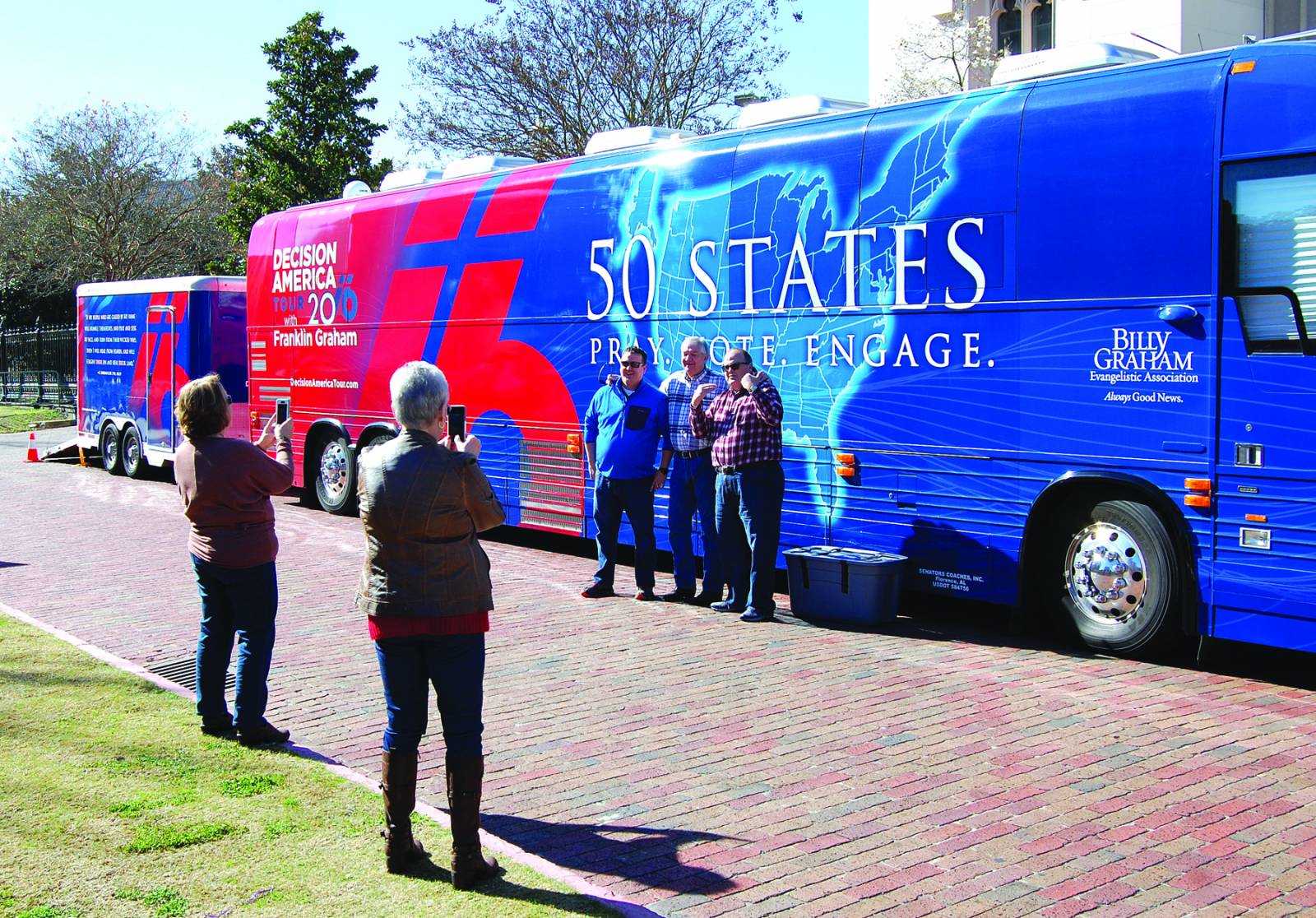 The Louisiana Baptist Convention promoted the event beforehand as did most of the Baton Rouge area churches via announcements, social media, sermon mentions and promotional videos. Many in the crowd were Baptists.

“I thought it was great,” said David Hankins, LBC executive director, afterward. “Quite a number of our pastors and laymen (were present). We had a good representation of Louisiana Baptists.”

Jeff Ginn, senior pastor of Istrouma Baptist, mentioned it in his Jan. 10 sermon and posted a link to the Tour’s promotional video on his face book page. “Our families, our churches, and our nation need a healing that only the Lord can provide,” he wrote. Dozens of Istrouma members were scattered throughout the large crowd.

Florida Blvd. Baptist’s and other Baptist churches’ vans were parked along the downtown’s side streets.

Ben Hackler, pastor of First Baptist in Sterlington, brought 13 members and some of them posed for phone-selfies in front of Graham’s tour bus before the rally.

“I think this is a great opportunity for young and old to unite just to pray and ask God to bless our nation – there’s no political agenda – but just for us to know that God is in control of all of it,” Hackler said.

“We’re not going to be stressed out about the future because we know who holds it.”

His father, Dennis Hackler, added, “Our nation is in bad need of a spiritual awakening and we believe Franklin Graham is going to be a big part of that. And we want to say that Louisiana gave a warm welcome to Franklin Graham coming here and we’re awfully glad he did.”

Sammy Morrow, pastor of Pleasant Hill Baptist near Pollock, said, “the body of Christ has been very lax in the past 75 years or so. We’ve taken a lot for granted with regard to our nation. If we are one nation under God we need to turn to him to so we can be the nation he has called us to be.”

Sam Russo, a member of Celebration Church in New Orleans, was passing out free flags to anyone willing to wave it during the rally.

“I’m here because I believe this is the kind of change our country needs,” Russo said. “The message that’s being sent is one that we should all listen to and pay attention to.”

Several Baptist lawmakers and government officials stood just offstage during the rally, and were asked for their thoughts as musician Dennis Agajanian warmed up the crowd with some patriotic songs.

“This is important that we as Christians come together,” said state Sen. Gerald Long. “We’re commanded to pray, especially for those in positions of authority and leadership.”

Rep. Mike Johnson, added, “this is important to show our values and Louisiana certainly stands for religious freedom in our bedrock principles. It is our deep religious heritage that has made us great. We move away from that at our peril.”

After the rally Graham met briefly with local reporters.

“It was a great crowd, a lot of energy, a lot of excitement,” Graham said.

By David Jeremiah EL CAJON, Calif. (BP) - Something strange happens to the psyche of a nation in difficult times. The downtrodden begin to resent government and wealthy corporations and individuals, seeing them as out of touch with, if not the cause of, their plight. Desperation can lead to a reversal of … END_OF_DOCUMENT_TOKEN_TO_BE_REPLACED