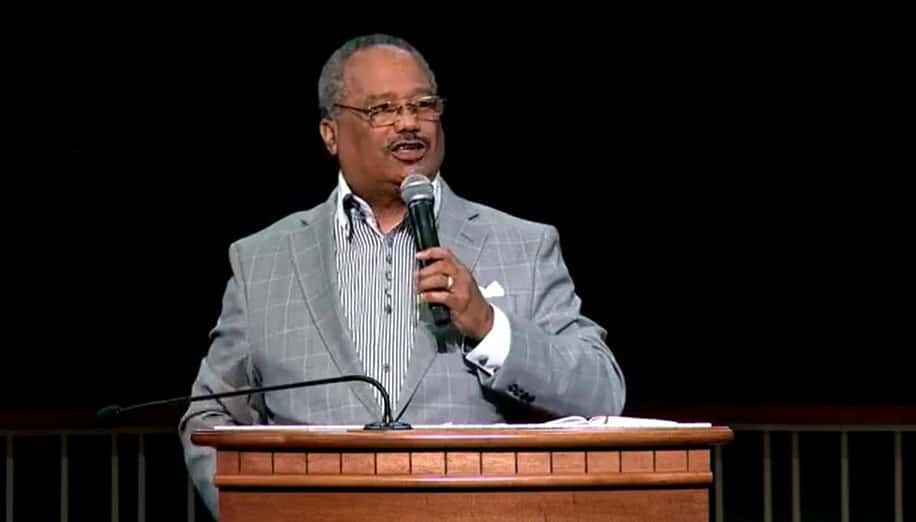 Fred Luter shared a message through the Franklin Avenue Baptist Church Facebook Live stream. The church has logged as many as 10,000 views during its online-only Sunday morning worship services since late March. Screenshot

Instead of preaching to nearly 3,000 worshipers packed inside the new worship center at the Franklin Avenue Baptist Church in New Orleans East, Luter finds himself facing empty chairs as he shares his message to a virtual audience watching via Facebook Live and YouTube.

Rather than dwell on the absence of faces in front of him, Luter focuses on the 10,000 or so “hidden” viewers who are listening each Sunday morning. Importantly, he maintains a priority on sharing the Word, regardless, and as a result, an average of 15 people per week since going online-only March 15 have respond by humbling their hearts to Christ for salvation or restoration or church membership, he said.

Luter said he never dreamed God would use this online option to reach so many with the Gospel.

“We built a big sanctuary when we relocated in 2018 and now have empty seats,” Luter told the Baptist Message. “We are limited in our ministry now because we can’t get out much, but our reach to share Christ has never seemed so unlimited.

“Never would we have gotten this type of response if it were not for this coronavirus,” he continued. “It’s been disappointing in a lot of ways but a blessing in some ways.”

New Orleans has been one of the hardest hit areas by the COVID-19 pandemic. CDC data show that by late March Orleans Parish had the highest per capita death rate of any county in the United States; and, seven of the 500 who have died in the parish since March 14 were members of Franklin Avenue Baptist.

The city is rebounding.

According to an analysis by the New York Times, New Orleans went from 9,343 new cases over a two-week in early April to 3,936 during the next two-week period.

In response a continued decrease in new cases for more than 21 days, testing and hospital capacity at confident levels and ample ICU beds and ventilators, New Orleans Mayor Cantrell announced May 12 that the city was entering phase one of relaxing public gathering restrictions, beginning May 16.

Luter realizes it will be a long recovery, but he is confident his church will rise up again in the same fashion as after the scattering of members caused by Hurricane Katrina in August 2005. In the storm’s aftermath, Luter led a rejuvenation to nearly 5,000 in average attendance by the time he was elected Southern Baptist Convention president in 2012.

“One of the things I have done is preach sermons of hope during this time of crisis,” Luter said. “COVID-19 is something that is affecting all of us. We have trusted God in difficult times before and we must continue to do that now.”

Luter said one of the most challenging aspects has been conducting funerals. Restrictions put in place by Gov. John Bel Edwards have limited funeral attendance to just 10 people, and Luter said he has been unable to visit congregants who have been hospitalized.

But, he said, he is doing as much as he can to stay in touch through phone calls.

“It’s been tough,” Luter acknowledged. “I’m a shepherd at heart. My heart is for the sheep. When the sheep hurt, I hurt. It’s been difficult not being able to be there. Even when they were in the hospital I couldn’t visit them. When they die, I couldn’t be there for them.

“But they realized I wasn’t able to be there and knew I cared,” Luter said. “Hopefully we are behind this and can move forward to some type of new normalcy.”

When cleared to re-gather as a whole congregation, Luter said his members will be asked to wear masks and observe social distancing guidelines.

In the meantime, given the city guidelines that prohibit gatherings of more than 100 people (far less than the 25 percent of seating capacity that the rest of Louisiana residents must follow), he said Franklin Avenue Baptist will continue with online-only services. At some point, he hopes the restrictions will be relaxed to allow to make it feasible to conduct multiple services to reach their entire membership.

Until then, he said “protecting ourselves” must be a priority.

“We need to do the best that we can to make sure we don’t expose others to this virus,” he said. But when all restrictions are removed, Luter is hopeful for more than just a rebound in attendance.

“My prayer is that people will have missed the church so much that they cannot wait to come back,” he said. “Those who are straddling the fence before will start thinking seriously of their relationship with God.

“I’m praying for all of our churches,” he said. “This has been a difficult time for all of us. The transition time hasn’t been easy. Our church will maintain the orders placed before us by our leaders and in the meantime we will prepare for that day when we get back to worshiping together. We definitely need to be there for each other and prepare for the harvest that is coming.”

By Stewart Holloway PINEVILLE, La. (LBM) - For over two months now, my oldest son, my mom, and I have spent most Friday mornings at my mom’s clearing overgrown brush. What was planted as a fruit orchard in an open pasture almost thirty years ago has grown into a wilderness of every kind of vine and tree … END_OF_DOCUMENT_TOKEN_TO_BE_REPLACED