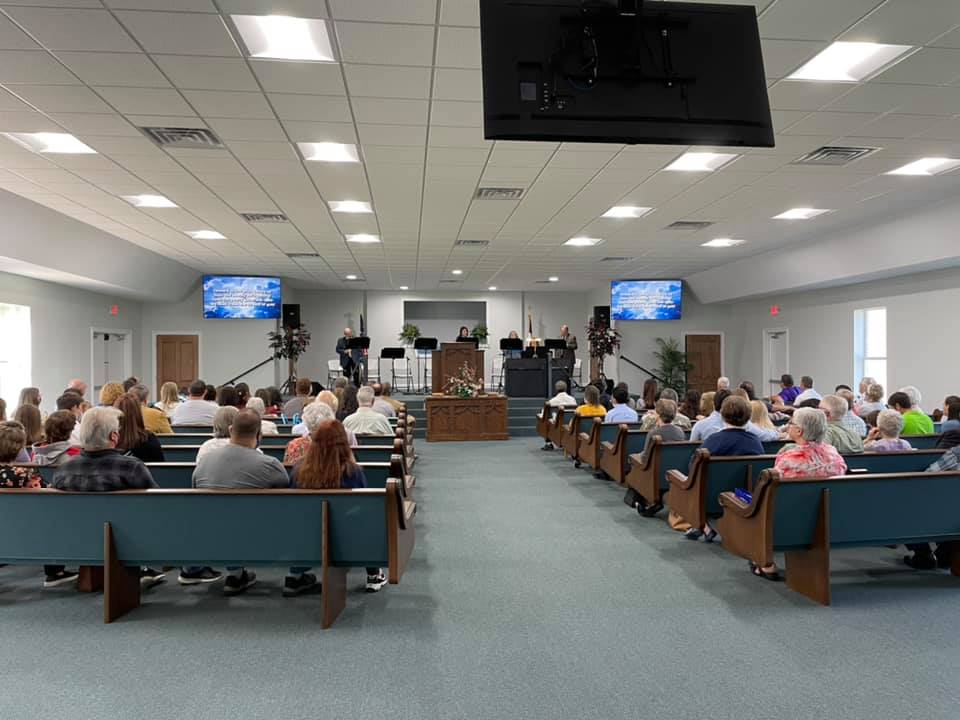 More than 100 people gathered April 11 to celebrate the dedication of a new worship center and Sunday school classrooms at First Baptist Church in Napoleonville. Submitted photo

NAPOLEONVILLE, La. (LBM) – First Baptist Church in Napoleonville, which in 2018 lost its worship center and Sunday school space in a fire, celebrated a new chapter in ministry April 11 when members and guests gathered to dedicate its new facility.

More than 100 people were on hand for the service to remember how God brought the church out of the fire and into a very bright future.

“What was accomplished here was nothing short of a miracle,” Pastor Chuck Chiasson told the Baptist Message. “I believe the fire and the rebuilding program of the last three years will redefine this church for years to come. Through trust in God, prayerful giving and the hard work of our members along with mission groups and other people, God has blessed us and we praise Him for our new facility.”

Chiasson said a feeling of helplessness overcame him when he received the call that the church building was burning after lightning strike on Jan. 7, 2018. However, the next morning Chiasson was heartened when he began receiving calls from so many people offering help as well as encouragement.

He soon discovered insurance would cover only half of the estimated $1 million needed to rebuild the facility, but God began providing the additional funds. He then provided space for the congregation to hold services and Sunday school.

Two days after the fire, the congregation met for prayer meeting in the fellowship hall, which was not damaged, and the church recorded its largest ever Wednesday night attendance, with 49. Two months later, a rental home next to the church became available and was used for Sunday school classrooms for the next three years.

With building plans finally finalized and the ground broken on June 20, 2019, the congregation and others began rebuilding. Under the direction of Mike Shumock, who serves as Louisiana Baptist missions builder strategist, a Baptist Builders construction team performed carpentry, hung Sheetrock, installed doors and painted.

“Napoleonville is one of the poster children of how mission builders are supposed to work because of how we come alongside the church,” Shumock said. “It was a true joint effort and a joy to work with them.”

Mission builders and teams from Highland Park Baptist Church in Texarkana, Texas, and Jesus Fellowship of Believers in Menomonie, Wisconsin, joined First Baptist Napoleonville in its efforts. The teams worked tirelessly to finish the 7,850 sq.-ft.-facility that now can accommodate up to 135 in worship (currently they average 60-70 for Sunday morning worship). Chiasson praised the dedication of church members who stayed for the entire project along with members of the mission teams.

In addition to volunteer labor, donations given to the project were crucial to completing the construction in a timely manner. Not only did members give beyond their tithes, but individuals, churches and the Louisiana Baptist Convention also contributed.

“Praise God, our building is totally paid for, debt free,” Chiasson said. “If you view our church today you will see it wasn’t put together cheaply but with first quality material, a complete sound system, remote TV system, cameras and all the electronic equipment we need for the service. I want to give God all the praise and all the credit because He deserves it.”

Chiasson said God has positioned the church to be a lighthouse to the community.

Since they have additional money left over from the construction of the new facility, the congregation plans to add more parking, an electronic sign off the highway and a children’s play area.

“We are looking to grow. We are hoping with the addition of a new facility and the outreach we can bring more people to the church. I would like to express sincere thanks to the members of First Baptist Church for the outstanding effort of sacrificial giving of time and finances to complete this project. They truly are a blessing from God.”

By Chuck Kelley Rarely does Hollywood contact a Southern Baptist seminary, but rarely is not never. One day location scouts for a major motion picture to be filmed in New Orleans called NOBTS and asked to tour the campus. They were looking for a place that with a bit of movie magic could be made to look like the … END_OF_DOCUMENT_TOKEN_TO_BE_REPLACED