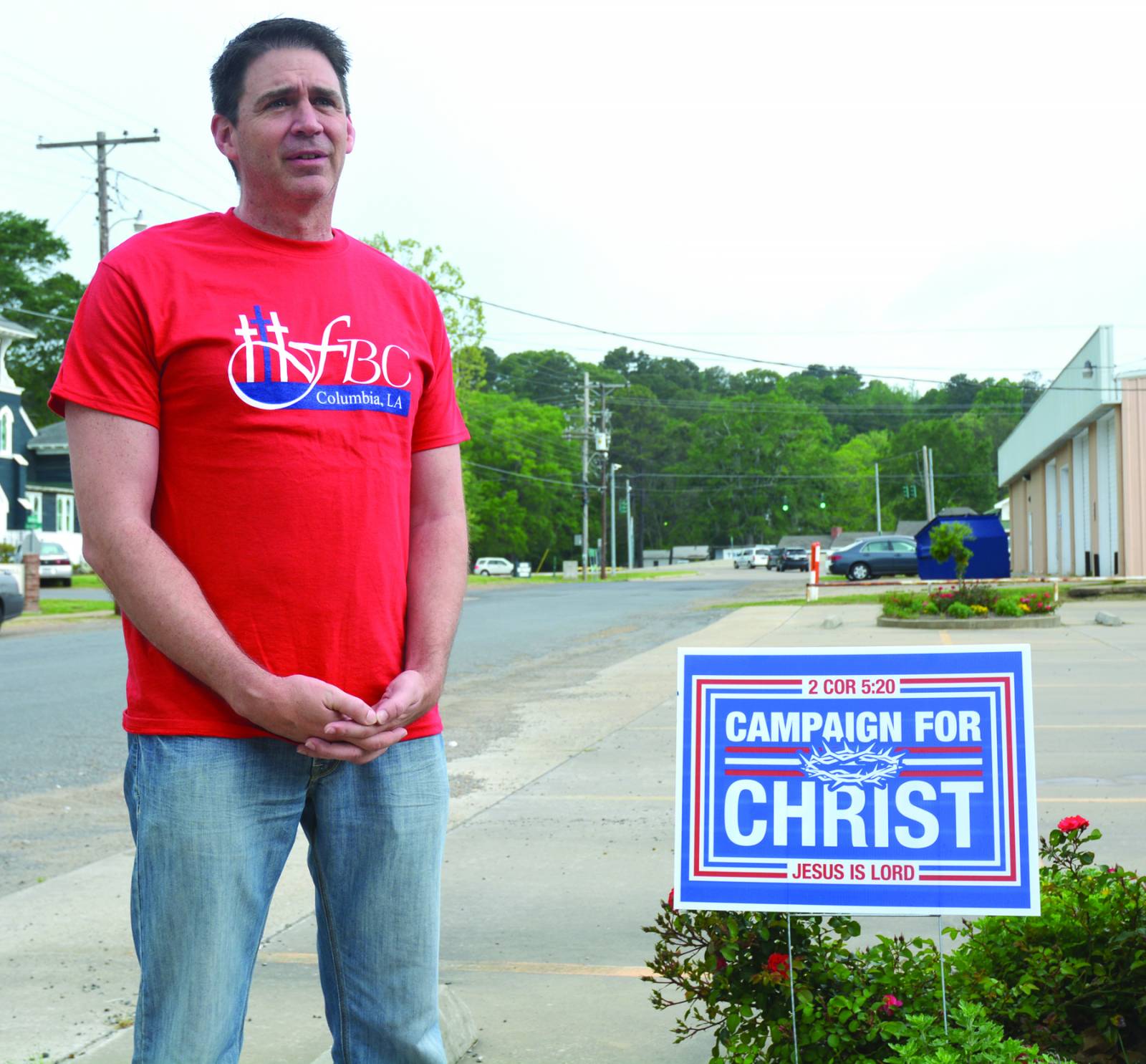 Pastor Eric Harriman shows one of the ‘Campaign For Christ’ signs First Baptist Columbia is placing in people’s front yards. The signs do not display the church’s name, just the name of Jesus. More than 300 signs have been posted as of June 2.

COLUMBIA – The presidential race is in full swing, but one Louisiana Baptist church is in the midst of a campaign that reaps eternal results.

Since February, members of First Baptist Church in Columbia have placed signs in the front lawns of homes and businesses in the parish. Based on 2 Corinthians 5:20, the Campaign for Christ is intended to remind believers they are representatives of Jesus.

The idea was born during a weekly Monday evening men’s Bible study at the church. Some men who had run for political office before told Harriman that during their individual campaigns, they had visited 95 percent of the homes in Caldwell Parish.

Harriman concluded that  if someone campaigning for office could visit nearly every home in an effort to get elected, First Baptist Columbia could do the same thing in an effort to spread the hope found in Jesus Christ.

“It kind of struck me that I haven’t personally been to 95 percent of the homes in Caldwell Parish and I’ve been here 13 years,” he said. “Our church has gone out as an association and covered the whole parish for revivals and so forth. In our church we tend to stay in town or we go within that three mile radius, but we hadn’t gone to the whole parish. We said, ‘Our message is so much better than any campaign message out there, so we should campaign for Christ.’”

The team has had some special moments, including an encounter with a man who after six years, was still was grieving the loss of his mother.  After visiting with him an hour, Harriman said the man finally found peace.

“I could tell the pain he was dealing with, in the loss of his mom,” Harriman said. “So it was cool to make that connection and minister to him and offer him to come and be a part of our congregation if he wanted to. But also we said we’re going to come back out, we’re going to bring the church to him and not expect him to come to us.”

Through May 11, signs have been placed in yards of 10 percent of the homes in the parish.

Harriman’s dream is for the campaign to stretch far beyond the parish line.

Already, an African-American church in Monroe has placed 50 signs in their community he said.

Signs also have been sighted in Olla and as far away as Alaska.

Harriman explained how the campaign is part of an effort to fulfill the theme of the church – begin, become, beyond.

“Begin a relationship with Christ, become a disciple and then go beyond the walls of the church and do what God has called you to do,” Harriman said. “Jesus says to send them out. That’s what we should be doing – teaching them so we can go.”

By Lane Corley Olive trees produce one of the most desired and sought after fruits around the world. The trees can live for thousands of years. The olive and the olive tree is spoke of in the Bible on numerous occasions. Including a few references to family life, like in Psalms 128:3 – “Your children will be … END_OF_DOCUMENT_TOKEN_TO_BE_REPLACED