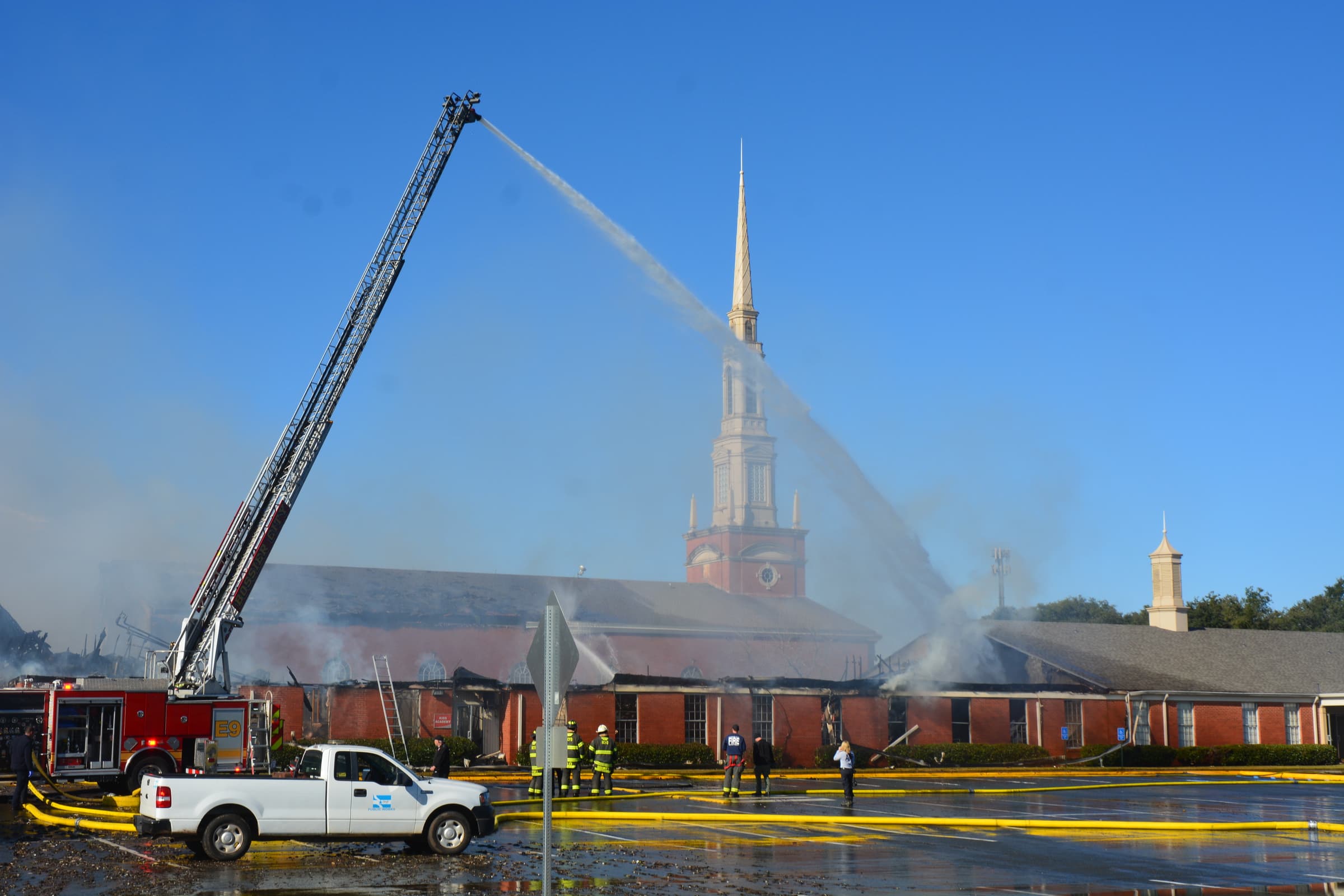 BOSSIER CITY – Pastor Brad Jurkovich voiced thanks for the prayers and concern expressed by many individuals and churches across the state and nation following a fire that destroyed the original  sanctuary, but spared other parts of the facilities at First Bossier, December 10.

The fire was reported around 5:30 a.m. and 30 fire department units responded in minutes from Bossier City and Shreveport, working tirelessly throughout the morning to contain the blaze, which resulted in no deaths.

Jurkovich said the worship center and Tinytown preschool area are among the buildings on campus that will be operational moving forward.

“Thank you Louisiana Baptists for praying for us and supporting us,” Jurkovich said. “So many of you from all across the state have been very supportive already.

“Obviously it’s a tough deal when you see a part of your campus being ravaged by fire,” he continued.

“But it means a lot that you’re praying for us. We know God’s going to help us move forward and we appreciate your prayers. Thank you for offering so much help. It means a lot to us.”

U.S. Rep. Mike Johnson, who was married in the facility that was heavily damaged in the blaze, was among several members of the congregation who took to Facebook to express their thoughts.

“We are so grateful there was no loss of life or major injury to anyone, and for the many extraordinary firefighters and first responders from Bossier and Shreveport who battled the blazes all day,” Johnson wrote. “We also are thankful for how the community has come together over this tragedy, with so many lending their prayers, support, and resources to assist in every way they can. Area churches, restaurateurs, and volunteers have all joined in to help, and the state’s top leaders from Washington to Baton Rouge have all committed the same.

“I told Pastor Brad Jurkovich this afternoon that I am convinced what the enemy meant for evil God will use for our good,” he continued. “I believe this will be a great unifying moment for First Bossier and our community at large. The church is not a building it is the body of Christ itself, and for more than 2,000 years, the church has often shined the brightest in the times of greatest challenge. We take our comfort tonight in knowing that God is still in charge–and His people are undeterred.”

A special called prayer and informational meeting for First Bossier is scheduled December 12, 6 p.m., in the Bossier Civic Center. Jurkovich said in a Facebook post that the church staff is meeting for prayer and to plan the next steps.

“By God’s grace we will move forward, we will rebuild and we will be committed to making a difference for the cause of Christ,” Jurkovich wrote on his Facebook page. “Thank you for your faith, love and support.”

By Lane Corley MADISONVILLE, La. - In Luke 15, Jesus gives us a glimpse of the Father’s heart for the lost. 1. Those far from God liked Jesus and he liked them (verse 1). Is that true of me? When was the last time someone far from God approached me? Am I available to them? Building relationships with … END_OF_DOCUMENT_TOKEN_TO_BE_REPLACED