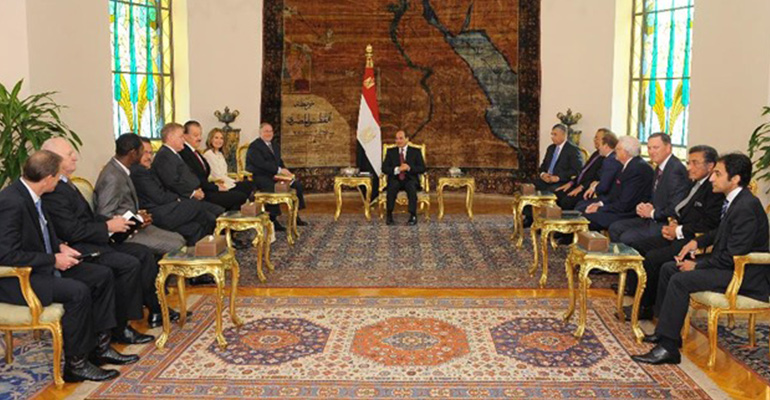 CAIRO, EGYPT – Family Research Council President Tony Perkins joined a delegation of U.S. evangelical leaders in Cairo Oct. 31 for a meeting with Egyptian President Abdel Fattah el-Sisi. The purpose of the meeting was to discuss his administration’s commitment to religious freedom for all Egyptians including Egypt’s Christians and other religious minorities, some of whom have been the targets of waves of terrorist attacks.

“I appreciate the opportunity to meet with President el-Sisi to discuss the concerns we have, as American Evangelicals, for the plight of religious minorities in Egypt, especially those who are our brothers and sisters in Christ.

“Egypt, under the leadership of President el-Sisi is making progress in protecting Egyptians from being targeted because of their religious identity. President el-Sisi is committed to working to ensure that every human being can exercise their God-given right to religious freedom. As part of this work, we encourage Egypt to increase public awareness of the cultural, economic, political and national security benefits of true religious freedom.

“Hopefully, the el-Sisi administration will serve as an example in the Middle East. Not too far away, in Iraq and Syria, religious freedom has taken a horrible toll over the last few years. While we advocate for this human right worldwide, much of our focus has been absorbed in recent years by the Middle East, where both Democratic and Republican administrations in the United States have recognized a genocide is occurring against Christians, Yezidis, and others at the hands of ISIS.

“Now that ISIS is being pushed back we must ensure these communities are able to return and rebuild. In that vein, we are pleased that the Trump administration is funneling aid directly to groups helping these communities on the ground instead of the inefficient UN system.

“Here in Egypt, I am greatly inspired by the powerful faith and determination of the Christians who have suffered through devastating terrorist attacks; their faith has been tested, but they continue to stand. Their courage is a great witness. Indeed, our brothers and sisters in the Middle East can help show us how to stand strong under persecution even as we face our own, albeit much more mild, forms of opposition to our faith in the United States. And we must not forget that as Christians here in America we must not only pray for and act on behalf of our brothers and sister in Christ who are being persecuted for their faith, we must exercise and defend our religious freedom at home as well,” concluded Perkins.

By Steve Horn ALEXANDRIA, La. - At the risk of sounding like the cartoon character, The Born Loser, I confess to you that I’ve had my share of losing. In four seasons as a high school football player for example, we won 6 of 40 games and 2 of those 6 were taken away for using an ineligible player. I’m not … END_OF_DOCUMENT_TOKEN_TO_BE_REPLACED