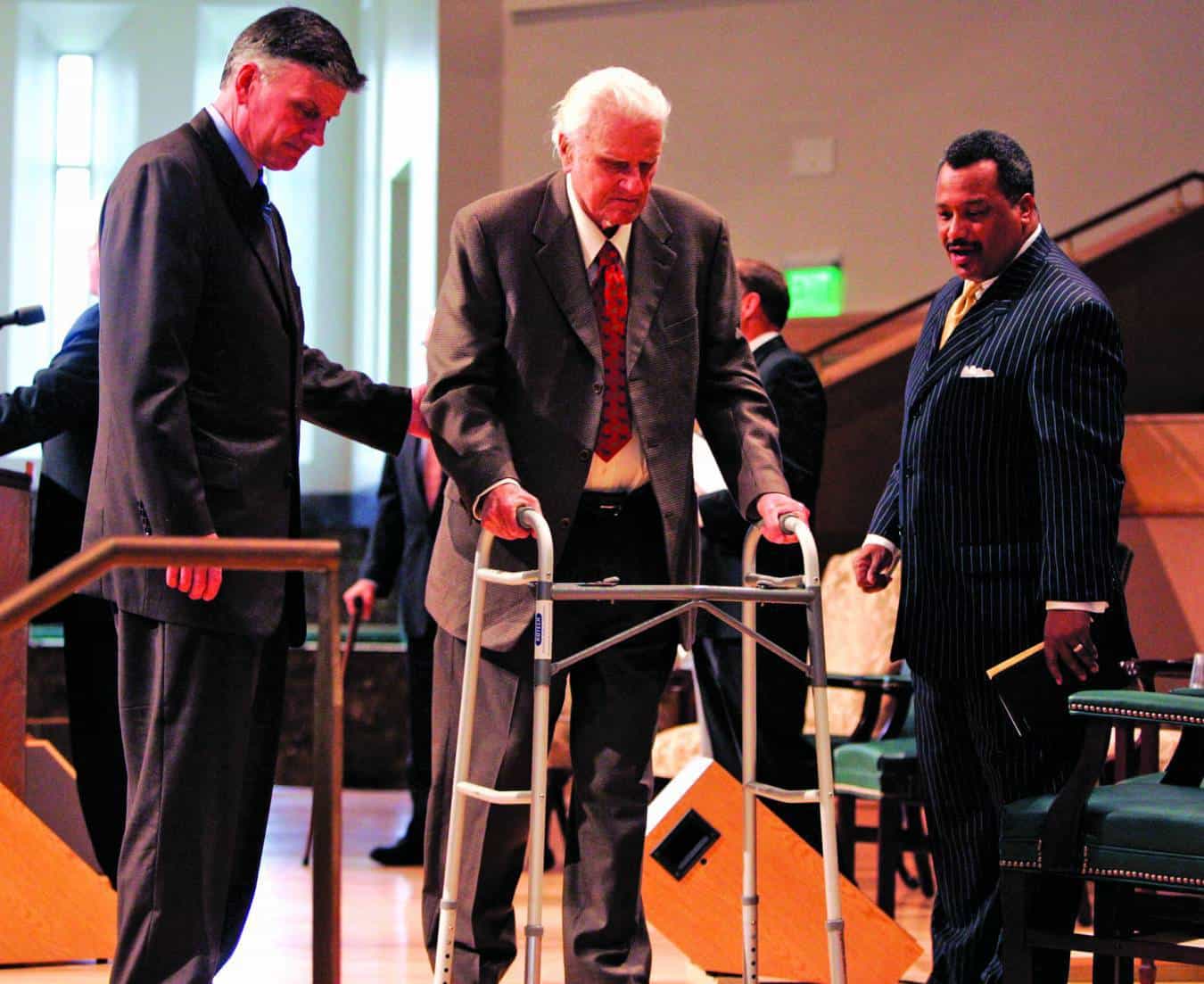 Billy Graham is assisted by his son Franklin and Fred Luter, pastor of Franklin Avenue Baptist Church, in New Orleans at a meeting for local pastors and spouses in 2006.

News that Billy Graham died during the early morning hours of Feb. 21 prompted reaction from those who admired the famous evangelist, including those in Louisiana Baptist circles.

Fred Luter, pastor of Franklin Avenue Baptist Church, New Orleans, said a highlight of his time as president of the Southern Baptist Convention was a 2012 visit to the home of Graham. 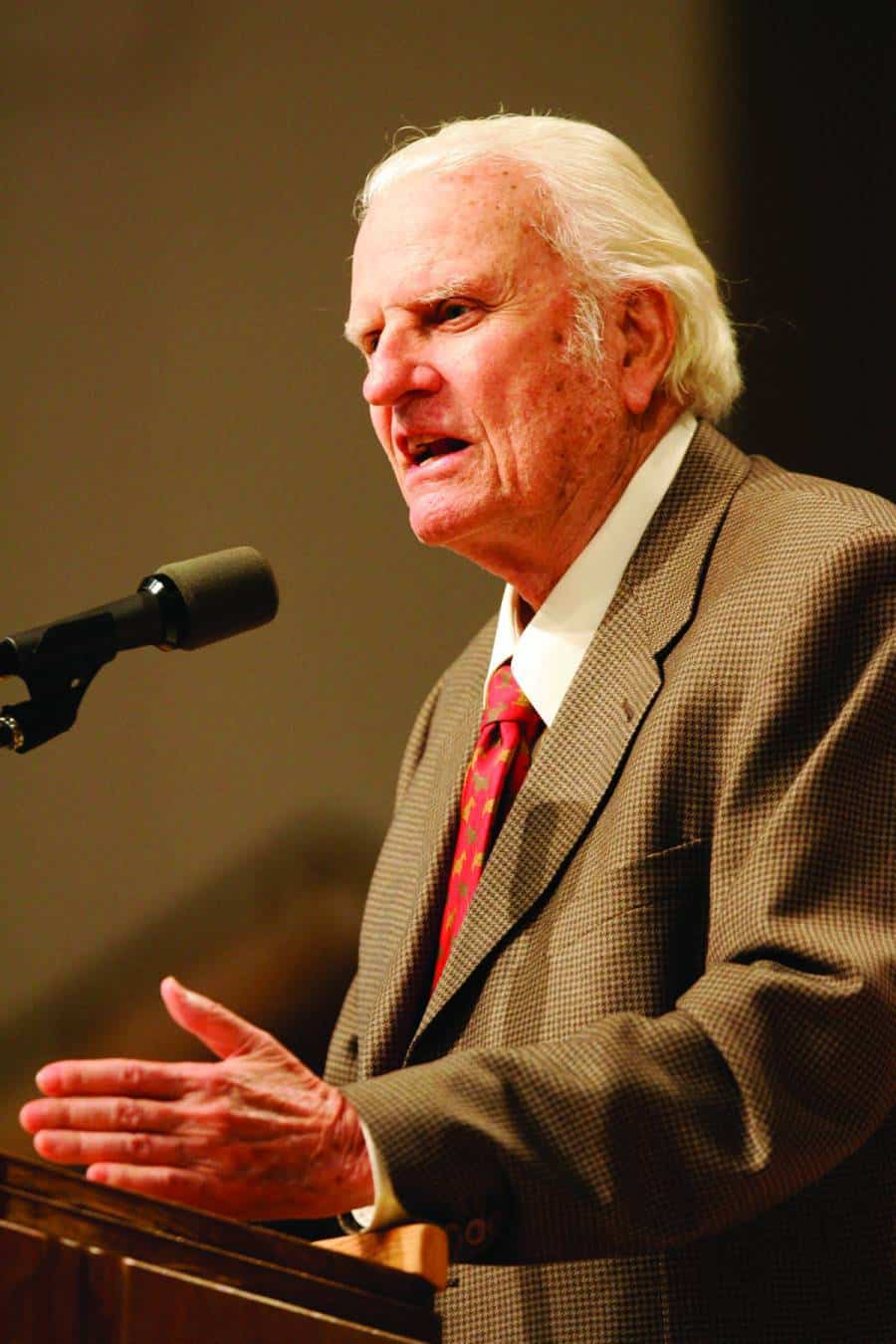 Billy Graham, after seeing the devastation in New Orleans from Hurricane Katrina, told pastors and their spouses, “I am absolutely devastated by what I’ve felt and seen in the couple of days that I’ve been here.”

“I felt like I was in the presence of Moses on Mt. Sinai,” Luter told the Baptist Message. “For a kid from the Lower Ninth Ward in New Orleans to be in the home of the greatest evangelist that ever lived was an unforgettable moment I will cherish for the rest of my life.”

Six years earlier, Graham came to New Orleans to lift the spirits of Luter, area pastors and the residents of the area who had lost so much in Hurricane Katrina, which made landfall in August 2005. 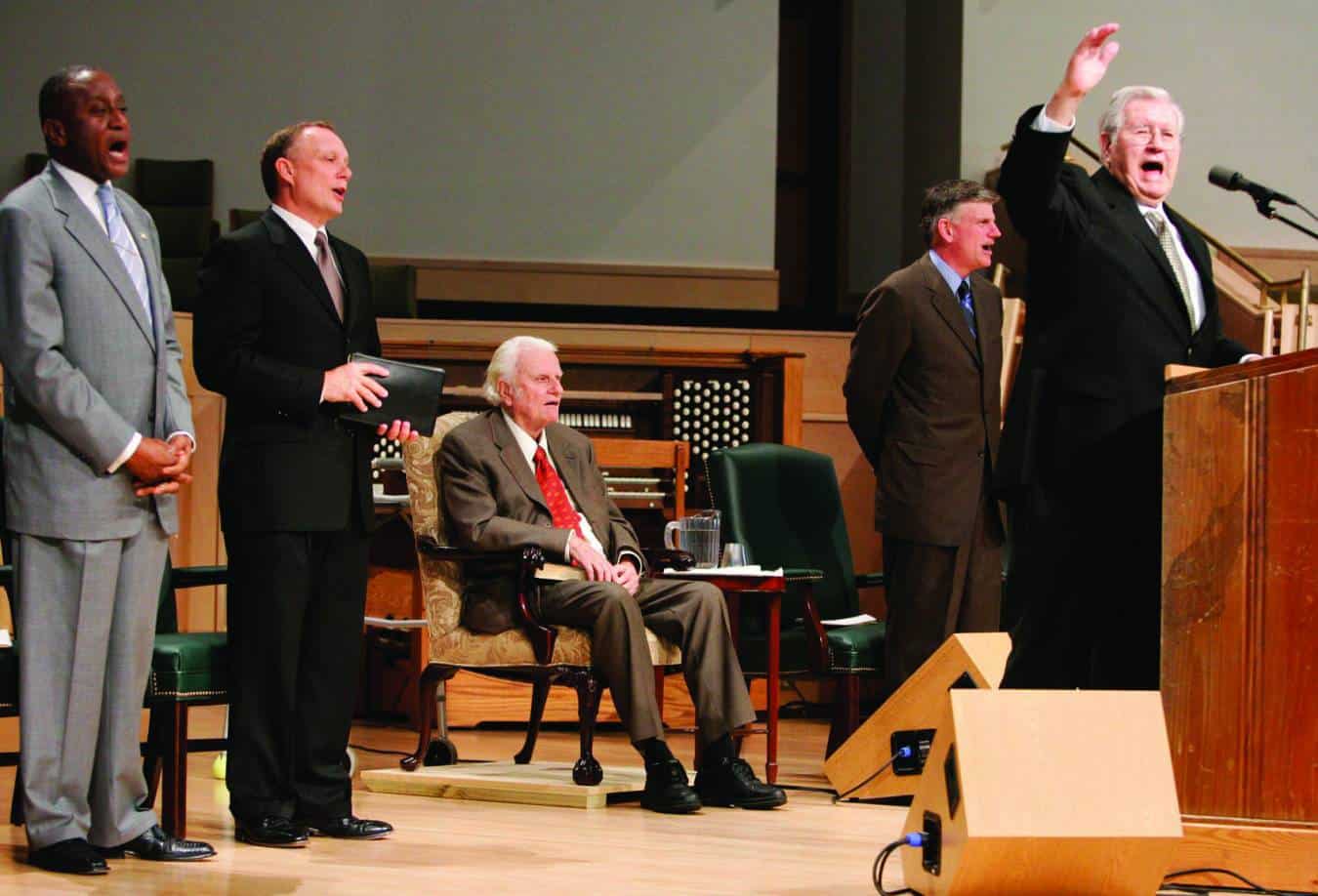 During his message, Graham told the overflow crowd of 17,800 people at Celebration of Hope in the New Orleans Arena in late February 2016 that it was one of the last evangelistic sermons he would preach and that he was looking “forward to a big reunion one day in heaven” with his long-time crusade colleagues George Beverly Shea and Cliff Barrows.”

The Celebration of Hope was among many such crusades where Graham shared the hope found in Christ.

David Crosby, pastor of First Baptist Church, New Orleans,  said Graham’s participation in Celebration of Hope came as a surprise, as his son, Franklin, was the only Graham scheduled to show up.

But when he appeared for a pre-crusade rally for pastors at First Baptist, New Orleans, Graham’s presence was the encouragement and support the ministers needed.

“Dr. Graham was a humble servant of God in every way,” Crosby said. “He was patient with the people who wanted to see him, meet him, and talk with him. He was caring toward all. His words of encouragement were heartfelt and uplifting.”

After the pastors meeting, Crosby accompanied Graham as they toured the devastation in the Ninth Ward, where debris, caused by Katrina, was piled high. After meeting with reporters on site, he returned to the vehicle with a concern.

“I remember him dropping his head and saying, ‘How will I ever tell Ruth [Graham’s wife] about this?’” Crosby recalled. “He repeated that phrase several times. His wife, Ruth, was failing in health even more so than Billy. He wanted her to know our situation. But like all of us, words seemed poor vessels in describing the vast extent of the human tragedy we witnessed in the flood zone that day.”

In his daily e-newsletter, Lonnie Wascom, director of missions for Northshore Baptist Association, recalled a moment when he was overcome with emotion as Graham entered the worship center of First Baptist, New Orleans, to meet with pastors following Katrina. As Graham approached the platform, Wascom and Paul Smith, lead pastor of Life Church, Mandeville, stood to their feet and began applauding. Others quickly followed suit.

“Others joined in,” Wascom said. “It was our honor to honor the man of God. Thank you, heavenly Father, for allowing me to live at this time in history when you used Billy Graham and his Evangelistic Association to bring so many souls to salvation.  All glory to You, Lord Jesus, for You are the One your servant, Billy, exalted with every fiber of his being.”

Wascom said he has tried to emulate Graham’s example of financial transparency, refraining from criticism of local churches, working with churches that supported cooperative evangelism efforts and reporting only official estimates of crowd sizes to avoid exaggeration.

Wascom said another commitment separated Graham from others – a pledge to not eat, travel or meet alone with a woman other than his wife.

“This part of the pledge these men made virtually guaranteed Billy’s (and their) sexual integrity and uprightness,” Wascom wrote. “The Modesto Manifesto was/is all about integrity and accountability. Since college days I have intentionally chosen to have accountability partners in my life and ministry and one reason for that is due to the lesson taught me by the Billy Graham Evangelistic Association.”

Throughout Graham’s life, he preached the Gospel to 215 million people who attended one of his more than 400 crusades, simulcasts and evangelistic rallies in more than 185 countries and territories, according to the Billy Graham Evangelistic Association. Graham also reached millions more through TV, video, film, the internet and 34 books.

Even with such a large number of people recorded, the exact impact may never be known on earth, said Waylon Bailey, pastor of First Baptist Church, Covington.

“I had the wonderful privilege of participating in the Baton Rouge crusade in the 1970’s,” Waylon said in an emailed statement to the Baptist Message. “As the very young pastor in Donaldsonville, I saw the excitement and impact Billy Graham had on my congregation and community. Who of us in the New Orleans area can forget the whole BGEA coming to New Orleans to bless us and preach the Gospel after Hurricane Katrina?

“Billy Graham’s greatest impact, I believe, has been his impeccable integrity,” he continued. “He has given us the example of a servant of God who lives well and finishes strong. ‘Well done, good and faithful servant!’” 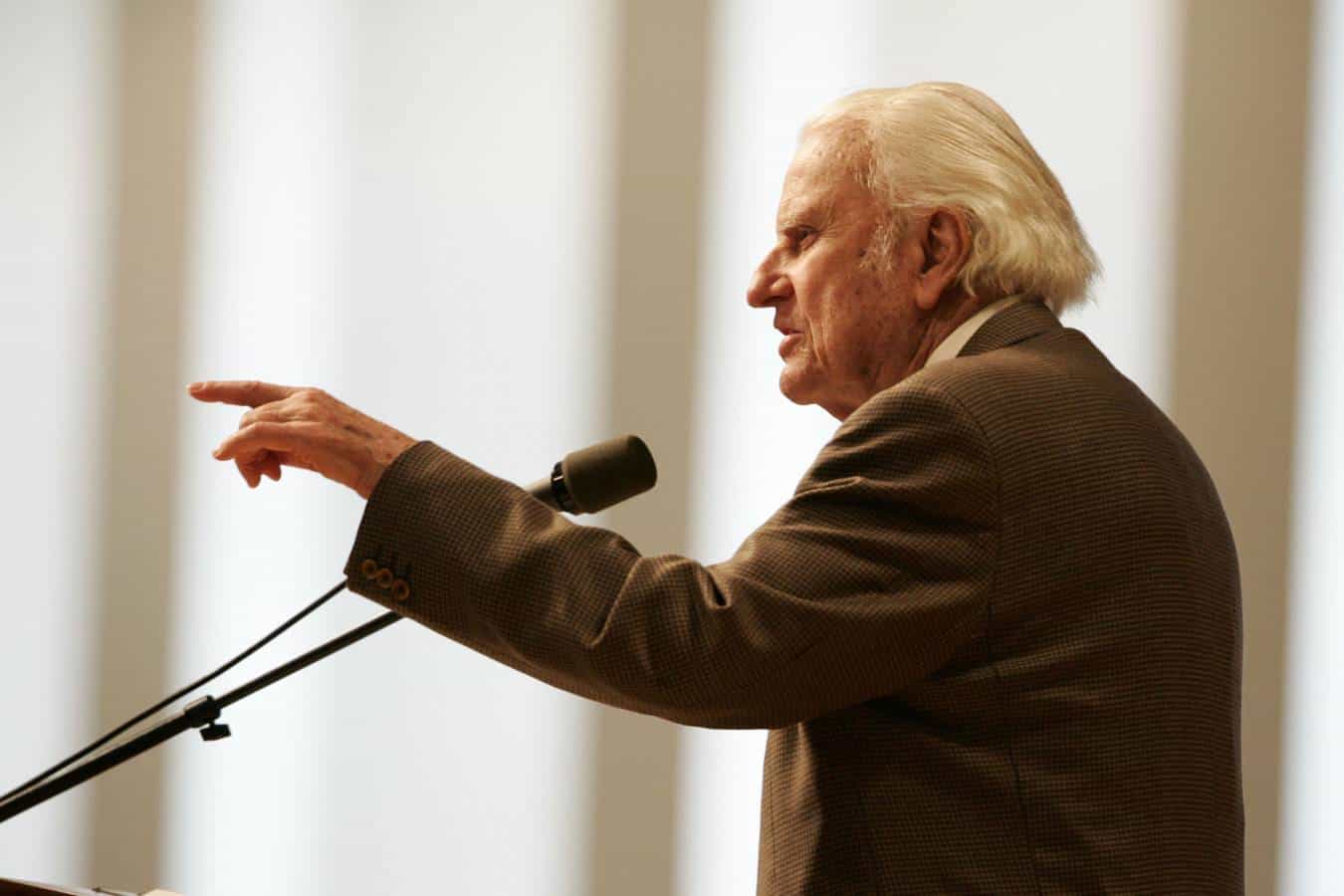 Billy Graham preaches to New Orleans’ area pastors during a meeting at First Baptist Church preceding the “Celebration of Hope” he and his son Franklin led March 11-12, 2006.

“I first heard Dr. Billy Graham preach in 1955,” Hankins said in an e-mailed statement. “He has been an icon for me and the face of Christianity for the world for well over a half century. He has now joined untold thousands of people who are in heaven because he faithfully preached the Gospel of Jesus to them.”

“Billy Graham always invited the people he encountered, famous or ordinary, to accept Christ, insisted on integrating his crusades in the still segregated South, involved local churches in every great crusade, freely taught everything he learned to other evangelists, continually sought new ways to introduce Jesus to those outside the church, and set the highest standard for personal integrity in every area of his life,” he said in an emailed statement to the Baptist Message. “He ran the whole race of his ministry without being distracted away from his calling as an evangelist.

“Sustaining his entire attention on inviting people to Christ for that long in the face of such distractions, changes, temptations, and disruptions is an accomplishment  beyond measure and difficult to fully appreciate,” he continued. “None of us who witnessed his ministry will ever see his like again in our lifetime. The prolonged faithfulness of his obedience is, in my opinion, a more remarkable accomplishment than the massive scale of his fruitfulness.”

By Steve Horn ALEXANDRIA, La. (LBC) - This year has brought about more challenges and cancellations than any of us care to recount. For those meetings and events that were scheduled, more times than not, they happened virtually rather than in person. This has been true for us as Louisiana … END_OF_DOCUMENT_TOKEN_TO_BE_REPLACED