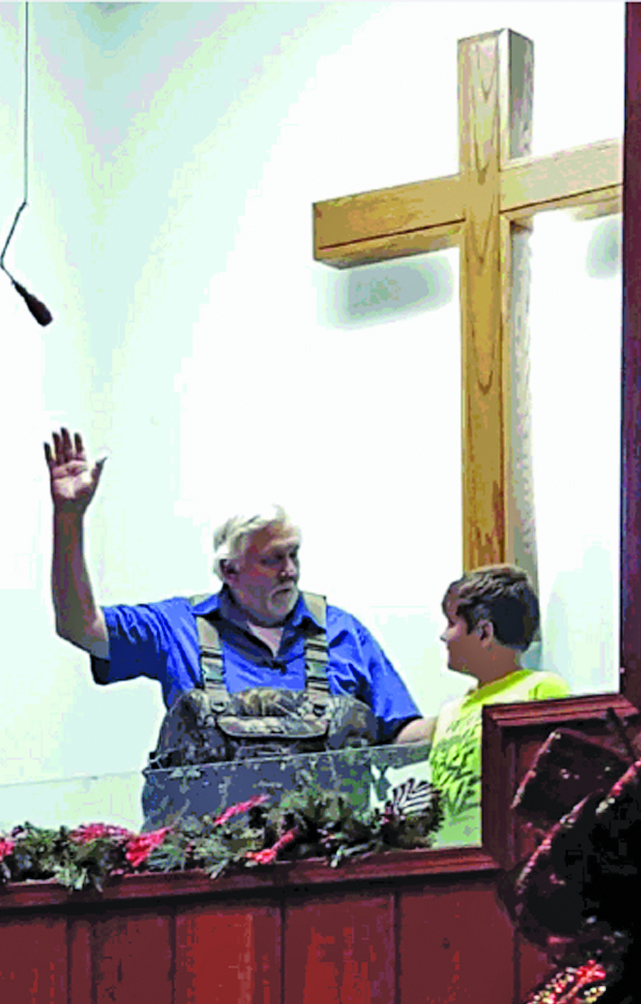 BASTROP – Faith Baptist Church is in the midst of a four-month revival and there are no signs of it ending anytime soon.

Since a city-wide crusade at Bastrop’s Morehouse Activity Center and a revival at the church that took place in January, Faith Baptist has experienced significant growth in both attendance and baptisms. Pastor Bodie Spicer and his members recognize something special is taking place at the Morehouse Association church, and they wait with anticipation each Sunday for how the Holy Spirit will move.

“When people start opening themselves to God and start listening and responding to the Holy Spirit and come to church with an expectation of hearing from God, then we see all sorts of miraculous things happen in everybody,” Spicer said. “I pray each week that our worship services get out of hand, out of my hand, and that the Holy Spirit takes over. That’s what I seek every week, and when it happens, it’s very rewarding and very moving. I’ve been pastoring thirty years and some of the most rewarding times of my ministry are right now.”

The groundwork for the movement at Faith Baptist began in early January when the church participated in multiple evangelism training sessions for its members, followed by holding a solemn assembly in its worship center. Spicer said the solemn assembly – a special gathering to confess sins and express a need for God to move – was the turning point that “fired everyone up.”

During the solemn assembly Spicer asked for a show of hands of those who never had led someone to the Lord but wished to do so during the upcoming crusade. Twelve people responded by raising their hands.

“The solemn assembly set everything in motion,” Spicer said. “None of our people had ever been through a solemn assembly for an hour-and-a-half. It was very moving, very emotional, very freeing.”

Next came the revival that involved Faith Baptist and four other churches in Bastrop, he said. Over a four-day period (Jan. 31-Feb. 3), the city-wide Morehouse Crusade, which took place at the Morehouse Activity Center just outside of Bastrop, drew more than 4,600 people, and  had 117 decisions, including 50 first-time salvations, 50 rededications and 10 who committed to serve in ministry. It was the culmination of eight months of planning, prayer and preparation.

Spicer said the response by those trained from his church to counsel individuals who made decisions during the crusade was heart-warming.

“It was super rewarding for me,” he said. “It’s hard to express how a pastor feels when he sees his people fulfilling the Great Commission by not just talking about it but doing it. That blesses a pastor’s heart.”

Church clerk Pat Johnson was one of those from Faith Baptist who counseled those who made decisions at the crusade. She said the hours of prayer and weeping over the lost was a catalyst for what followed for Faith Baptist and the community.

“Our pastor said he needed counselors, which scared me to death,” Johnson said. “I tried to get out of it, but the Lord kept on. I knew if I was going to move another step forward in my Christian walk I needed to do this. And He did bless me. I was able to introduce four people to the Lord, one who was my special friend. That was such a blessing.” Johnson said that friend was Peggy Skains, who had lost a leg but was determined to be baptized even though Faith Baptist’s baptistery is accessed by a winding narrow stairway. She said the two woman crawled together more than 20 steps to follow Jesus in believer’s baptism.

Ruth Sivils, who fasted with her husband for 47 days before the crusade, counseled two people who declared their faith in Jesus Christ at the revival. She echoed Johnson’s thoughts.

“We are still in revival,” she said. “Faith Baptist Church will never be the same.”

Of those who made first-time decisions, 19 were baptized at Faith Baptist and six more baptisms are pending.

Joyce Johnson, a 76-year-old who lost a leg to an illness, was among those baptized recently. After her friend died from cancer, Johnson knew God was leading her to make a decision about where she would spend eternity. While she is still unsure about her friend’s decision, Johnson is confident she herself will be in Heaven one day.

“I decided before my friend died that if I had doubts, I need to get it right,” Johnson said. “One night as I sat in my house, all of a sudden it came to me that the Lord wants me to be saved. When it happened, I felt so good. I can raise my hands now when I’m singing and praise the Lord, which I couldn’t do before.”

In the youth group on Wednesdays, as many as 50 now come, compared to around 15 on average during the latter part of 2015.

Spicer said an overall excitement is present at the church every week, with the congregation not knowing if this would be the Sunday or Wednesday when God moves mightily again.

“We are still in revival at the church,” Spicer said. “Our people have a renewed commitment. Our attendance and giving have been up, and there is a sense of expectation that God will act in every service.”