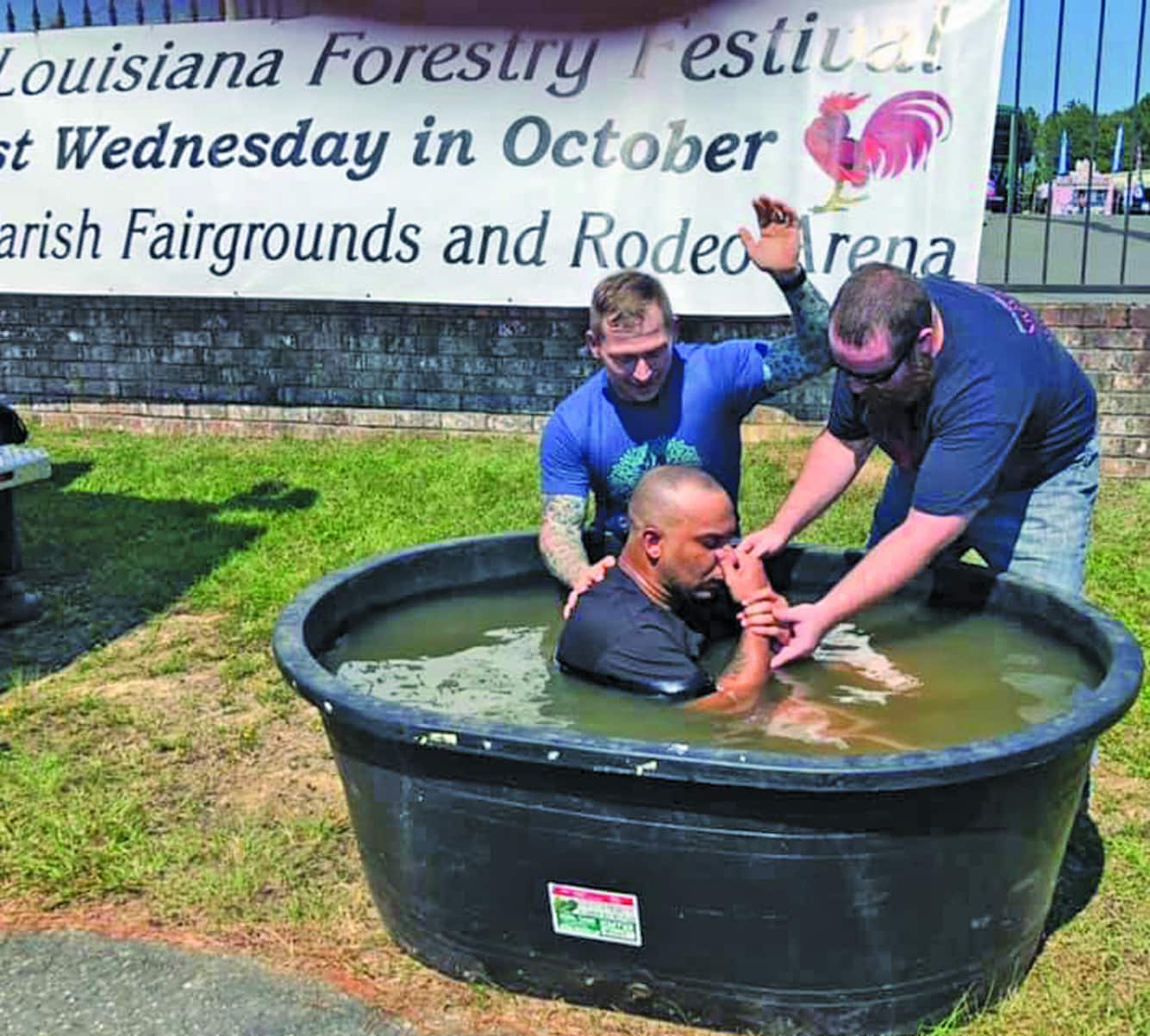 LEESVILLE, La. (LBM)–Xavier Tate found more than fun and games on the midway during the annual fair and rodeo in Vernon Parish. During his temporary reprieve from the confines of the local jail as a member of a work crew, he found freedom in Christ and was baptized the same day —  all because of an act of compassion by members of the Vernon Baptist Association of churches.

Jearme Ousley, student pastor at the Pine Hill Baptist Church in Leesville, told the Baptist Message the associational team served breakfast to Tate and his jail mates and that that kindness softened his heart.

Ousley said that Tate was baptized shortly after making a profession of faith — with the Louisiana Baptist volunteers singing “Amazing Grace.”

“The goal was simple – to show the love of Jesus to lost, broken and hurting people who many look down on and consider outcasts,” Ousley said. “Xavier thought he was just there to clean up and

wasn’t expecting a hot meal, let alone a group of men to sit down and hear his story and share the Gospel with him. The gentleman accepted Jesus as his Savior that morning and was overwhelmed at the amount of love complete strangers were showing him.” 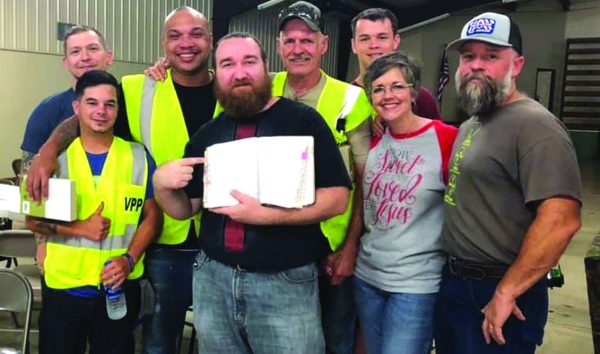 Larry Galloway holds the Bible he used in leading Xavier Tate to the Lord. Galloway, a member of East Leesville Baptist Church, was a volunteer with the Vernon Baptist Association who were part of an outreach effort during the Vernon Parish fair and rodeo to carnival workers, which included inmates from the Vernon Parish jail. Submitted photo

“It was just a blessing to watch the Holy Spirit work in that moment and see the beginning of restoration happen in a family,” he said.

The baptism was an answered prayer for Galloway, who led Tate into a relationship with the Lord.

“We were called to plant the seed at this outreach and God would produce the fruit,” Galloway said. “That morning He poured out grace in abundance. He saved that one person on this particular morning and we all rejoiced mightily.”

“Xavier saw the kindness and the compassion of God on display,” he continued. “He was wearing a vest that identified him as an inmate at the correctional facility, but not a single person looked down on him. Our prayer was that God would make those doors available.

“As I opened up Romans 10:9-10 and showed him the verses, he was holding back tears,” Ousley recalled. “The more I explained how much grace God has for all of us, the more overwhelmed he became, and I asked him if he wanted this free gift of salvation. During our conversation he admitted plainly he understood he did a lot of wrongs in his life and that he didn’t measure up to where God wanted him to be. Right there, he repented from his sins and put his faith in Christ.”

Tate’s spiritual journey is far from over, and Galloway and Ousley plan to meet with him for prayer and Bible study to help him with his spiritual walk.

“Thinking back on my own life, I had a number of questions in the years after I became a Christian and no one ever gave me answers,” Galloway said. “It wasn’t until I was an adult that I discovered them. I realized then we don’t share them often enough with people. I wanted him to know we are going to help him know fully the amazing truth found in Scripture.”

Rhonda Mann, ministry assistant at the Vernon Baptist Association, said she was grateful for the spiritual harvest that was reaped from the many volunteers who showed up for the outreach.

“It was a community effort, and a community revival,” Mann said. “We are excited to see what the Lord has planned next for our community.”

By Stewart Holloway PINEVILLE, La. (LBM) - For over two months now, my oldest son, my mom, and I have spent most Friday mornings at my mom’s clearing overgrown brush. What was planted as a fruit orchard in an open pasture almost thirty years ago has grown into a wilderness of every kind of vine and tree … END_OF_DOCUMENT_TOKEN_TO_BE_REPLACED