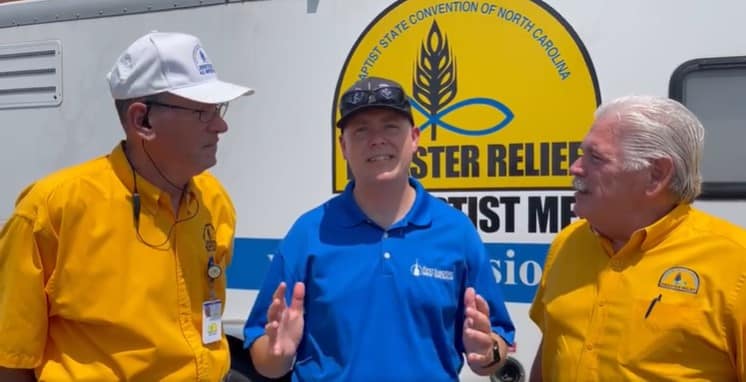 Not only did he accept the call to move from Trinity Baptist Church in Lake Charles as associate pastor of missions and evangelism to serve as pastor of First Baptist Church in New Orleans Jan. 3, but he has been instrumental in the coordination of relief responses to three major hurricanes that have hit Louisiana since August 2020.

Gilbert was at the forefront of relief efforts following Hurricanes Laura and Delta as Trinity Baptist became a hub for disaster relief in Lake Charles. Then, 10 months after Delta, Gilbert found himself yet again leading another disaster relief response, this time at First Baptist New Orleans.

“God knew what was coming to this region and I hope he has used me to be helpful to the community,” Gilbert told the Baptist Message. “I learned so much from Gibbie McMillan, former state Disaster Relief coordinator and present Louisiana Disaster Relief Coordinator Stan Statham, who were in the thick of it at Trinity along with Pastor Steve James and Greg Bath. We went through an intense training program at Trinity and applied it here.”

Since opening their campus to DR operations, FBC New Orleans has hosted 120 members of the North Carolina Disaster Relief team. Church members also will gather every Saturday, beginning Sept. 11, at the church to receive assignments from the North Carolina team for worksites that need assistance clearing debris from their property.

Amid the devastation, Gilbert has seen God present opportunities to shed the light of the Gospel such as at the property of a homeowner in LaPlace. Gilbert and six members of First Baptist New Orleans cleared out wet Sheetrock, furniture, and other household items within a few hours.

“The woman who owned the home at the end of our time broke down and said we did in hours what would take her weeks to do,” Gilbert said. “She was so grateful and appreciative of our time there. We had a good moment to minister to her.”

He also expressed appreciation for the prayers, donations of money and goods and the many volunteers including some of their staff at Trinity Baptist who have contributed to the relief operations at his church and other parts of the greater New Orleans metropolitan area.

Gilbert said the Trinity staff came on Sept. 6 and had a time of prayer and ministry at First Baptist Church in LaPlace. Trinity Pastor Steve James, Associate Pastor of Business Administration Greg Bath and North Venue Teaching Pastor Adam Brock, along with others from Trinity brought tarps, roofing materials, cleaning supplies, bottled water and a financial gift for both First Baptist New Orleans and LaPlace.

“They want to help this church long term, but they are not even done with repairs on their own church and yet drove over to help to minister,” he said. “It meant the world to me and filled my heart with joy. That’s an example of the true brotherhood we share.”

By Mark Devine As the dust settles from the annual meetings of two major evangelical denominations, the contrast between them could hardly be more stark. Courage won the day among those gathered for the PCA. Fears of elitists won out among the messengers to the SBC. ... READ MORE … END_OF_DOCUMENT_TOKEN_TO_BE_REPLACED