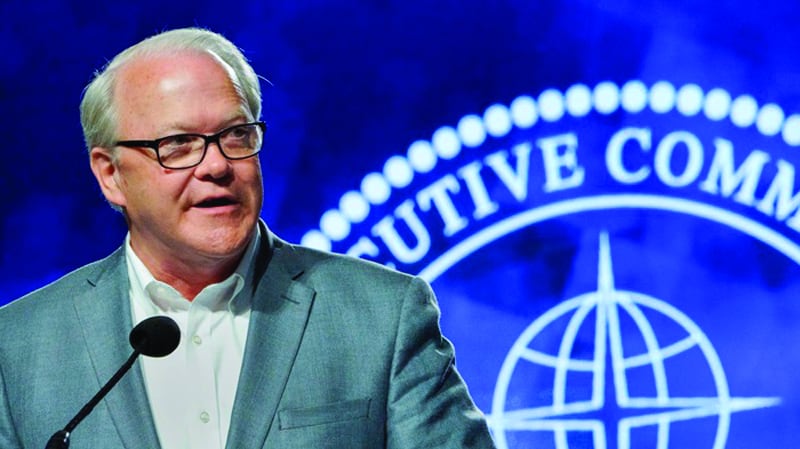 Frank S. Page resigned as president and chief executive officer of the SBC’s Executive Committee, March 27 over “a morally inappropriate relationship in the recent past.”

NASHVILLE (BP) — Frank S. Page has resigned as president and chief executive officer of the Southern Baptist Convention’s Executive Committee, effective March 27 over what is described as “a morally inappropriate relationship in the recent past.”

“Last evening, the officers of the Southern Baptist Convention Executive Committee met via phone conference with Dr. Frank Page during which he announced his plans for retirement. Today, I spoke with Dr. Page and learned that his retirement announcement was precipitated by a morally inappropriate relationship in the recent past.

“This news will, we understand, bring great sorrow. I have shared with the Executive Committee officers what Dr. Page shared with me, including Dr. Page’s repentance and deep regret that his actions have caused pain for others.

“My heart is broken for Dr. Page, his family and everyone affected,” Rummage, senior pastor of Bell Shoals Baptist Church in Brandon, Fla., stated. “I believe I speak for the entire Executive Committee in saying that we are committed to provide them the spiritual and emotional support they need in the coming days. We also recognize the stewardship we owe Southern Baptists and the watching world to communicate with truth and candor and to honor the Lord in our actions and decisions.

“I call upon all Southern Baptists to pray for everyone involved in a situation like this, and especially for Dr. and Mrs. Page. Please pray for the Southern Baptist Convention and all that is entrusted to the Executive Committee.

“It is with deep regret that I tender my resignation from the SBC Executive Committee and announce my retirement from active ministry, effective immediately. As a result of a personal failing, I have embarrassed my family, my Lord, myself, and the Kingdom. Out of a desire to protect my family and those I have hurt, I initially announced my retirement earlier today without a complete explanation. However, after further wrestling with my personal indiscretion, it became apparent to me that this situation must be acknowledged in a more forthright manner. It is my most earnest desire in the days to come to rebuild the fabric of trust with my wife and daughters, those who know me best and love me most.”

Page, 65, as EC president, has held a key role in coordinating the work of the SBC’s national ministries, encompassing two mission boards, six seminaries and other entities, overseeing a Cooperative Program budget of nearly $200 million yearly. Page’s work also included building relationships with 42 state and regional Baptist conventions and 47,000-plus Southern Baptist churches in all 50 states.

Page was the 2006-2008 president of the SBC, elected to the post as pastor of First Baptist Church in Taylors, S.C. Before being elected as Executive Committee president in 2010, Page was serving as vice president of evangelization for the North American Mission Board, from 2009-2010.

Among the hallmarks of Page’s eight years as EC president have been strong calls for personal evangelism, support for the Cooperative Program channel of Southern Baptist missions and ministry support, and inclusion of numerous ethnic groups, women, young leaders and small-church pastors in the life of the convention.

The Pages have two daughters, Laura and Allison; a third daughter, Melissa, died in 2009.

By Steve Horn ALEXANDRIA, La. (LBC) - This year has brought about more challenges and cancellations than any of us care to recount. For those meetings and events that were scheduled, more times than not, they happened virtually rather than in person. This has been true for us as Louisiana … END_OF_DOCUMENT_TOKEN_TO_BE_REPLACED