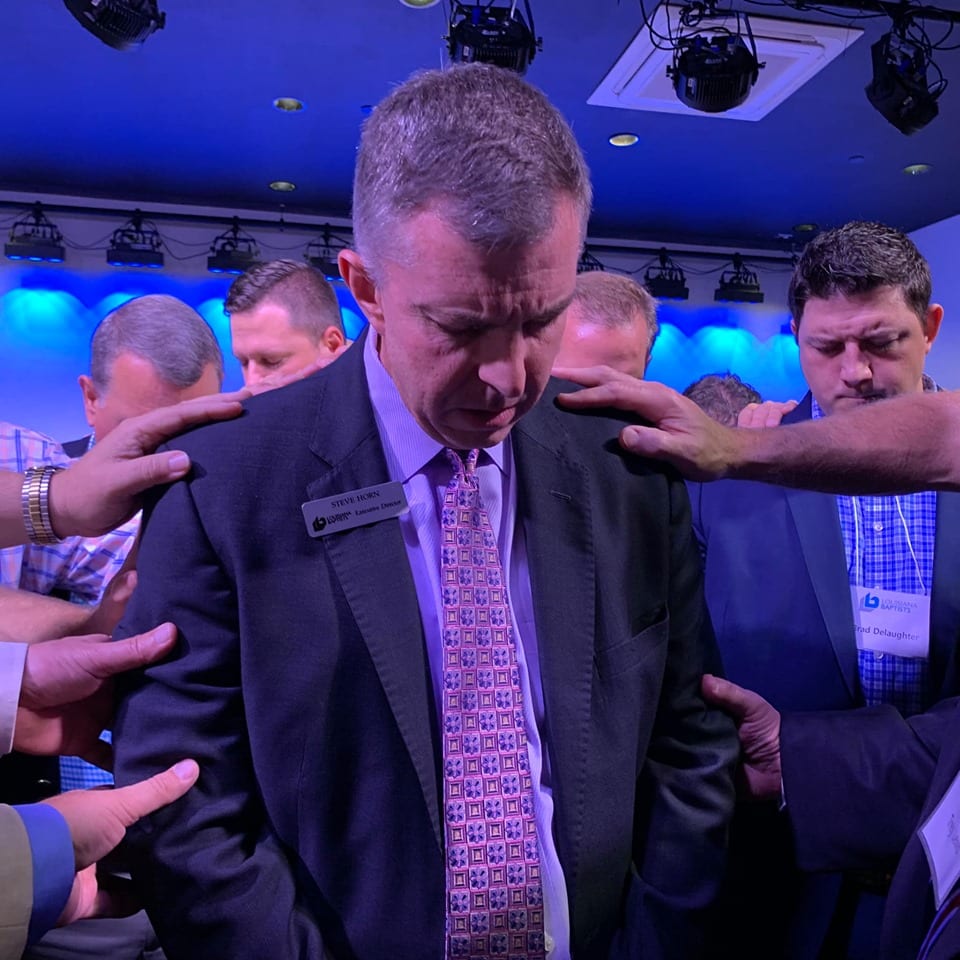 WOODWORTH, La. (LBM) –In his first Executive Board meeting as executive director, Steve Horn challenged Louisiana Baptists to focus on “we” and on sharing the Gospel.

“The reason for our meeting today, the reason for the existence of the Louisiana Baptist Convention is ‘we,’” Horn said during the Sept. 24 meeting at the Tall Timbers Baptist Conference Center in Woodworth.

“’We’ believe ‘we’ can accomplish together what we cannot accomplish separately,” he explained. “‘We’ is the fuel behind opportunities such as YEC, ECON and others. ‘We’ is the reason Louisiana Baptists have planted more than 249 churches over the last nine years. ‘We’ have the ability, potential and power to get inside the hearts and homes of 4.6 million people through efforts such as Harvest and Here for You. Without ‘we,’ there is no reason for us to take time away from our busy schedules for meetings such as this.

“Southern Baptists and Louisiana Baptists believe in the power of ‘we’ to advance God’s Kingdom in Louisiana and beyond,” he declared.

Horn shared with board members that during his first four months on the job he has facilitated 11 listening sessions with pastors and an additional session with directors of missions. Horn said he discovered that, despite wide diversity, Louisiana Baptists agree on at least two things: Louisiana is lost and the only answer to that lostness is Jesus.

On that point, Horn said he has discovered that there are 33 Louisiana municipalities with populations of more than 3,000 people that do not have a Louisiana Baptist ministry presence. He emphasized that the LBC will make a specific effort to plant churches in those 33 communities while continuing to share the Gospel with the lost in other areas of the state.

Board members, their wives and other guests surrounded Horn in corporate prayer.

The allocation formula for distributing Cooperative Program gifts between the Southern Baptist Convention and Louisiana Baptist causes remains unchanged, 63.26 percent to support ministries in the state and 36.74 percent forwarded to fund national entities.

The budget will be presented to messengers for approval during the 2019 LBC Annual Meeting, scheduled for Nov. 11-12 at the Randolph Riverfront Center in Alexandria. The budget continues to mirror a national downward trend; however, the proposed 2020 total is the smallest reduction in recent years.

Upon the committee’s recommendations, the Executive Board received the second quarter 2019 financial report, the 2018 annual audit and approved the 2020 State Missions Service Budget of $12,206,651.

In his report to the Executive Board, Louisiana College President Rick Brewer shared about a spiritual awakening that is taking place on campus. Since the beginning of the semester, 57 students have professed their faith in Christ at various events, including seven at the fall revival, Sept. 17-19.

Brewer said more students are needed to help fulfill its mission of training young people to make a difference in culture, and that LC offers numerous scholarships to help lessen the financial burden for families. These awards include a proposed President’s Christian Leadership Award, given to a student from each Louisiana Baptist church or high school that meets certain criteria.

“We have a challenge, but we have an answer,” he shared. “You have a college that is preparing and equipping students, transforming lives, equipping graduates for the future to go to the best medical schools, law schools, seminaries, etc. And she needs your help.”

Before the meeting, Brewer shared with the Baptist Message how, since Oct. 3, the Chick-fil-A on Jackson Street in Alexandria is serving meals on campus during lunchtime Mondays and Thursdays, but could expand its days of operation based on demand. Responding to a question about whether something more permanent was possible, he said an on-campus store would benefit from students and faculty as well as the 50,000 or so motorists who drive by LC each day.

For his part, Louisiana Baptist Children’s Home and Family Ministries President and CEO Perry Hancock announced a partnership with Lifeline Children’s Services that will provide international adoption services for Christian families in the state.

Lifeline Children’s Services is an accredited provider of adoptive services licensed in 13 states with adoption programs in 18 countries.

The organization based out of Birmingham, Alabama, ministers to adoptive families through intentional discipleship, pre-adoptive education, and intentional post-adoption support to help families be successful disciple makers with children who may come from complex, difficult circumstances.

“We are excited to work with Lifeline Children’s Services to bring Christ-centered, adoption services to families in Louisiana Baptist churches,” Hancock said in a news release distributed to the Baptist Message at the meeting. “Lifeline is one of the largest and most respected adoption agencies in America. In the past few years, options for quality, faith-based intentional adoption services have been limited in our state. Lifeline will meet this need and serve our families and churches with excellence.”

Wayne Taylor officially announced to the Executive Board his plans to retire, staying on with the Louisiana Baptist Foundation until the search for his replacement is completed. During his tenure, assets under management have soared by $100 million, and another $94 million has been distributed to Baptist causes, according to Baptist Message reports and LBF records.

“The Louisiana Baptist Foundation is here to help your donors give money to you and we do work for you behind the scenes,” Taylor said. “But also we get to be part of sometimes a process that we cannot see until the end of it. Often times God moves in people’s hearts to do gifts that do not happen until much later but it’s right on time.”

Will Hall provided updates on the Baptist Message as well as the Office of Public Policy.

Hall, who is executive editor for the news outlet, highlighted some of the key stories covered since his last report to the board, including the Beth Moore Twitter war against Southern Baptists, the SBC resolution about Critical Race Theory, the 50th anniversary of Buzz Aldrin’s celebration of the Lord’s Supper on the moon, the opening of Louisiana Baptists’ orphanage in Haiti and 1,835 salvations recorded by a largely Louisiana Baptist mission team in Brazil.

He also mentioned ongoing efforts to add new features like the leadership series for pastors and church planters developed in cooperation with John Hebert, state director for missions and ministries.

Regarding his work as director of public policy, Hall said Louisiana Baptists scored a number of victories during the most recent legislative session. He cited the passage of multiple pro-life laws led by Louisiana Baptist lawmakers, and the defeat of an Equal Rights Amendment intended to undo pro-life legislation. He also celebrated the defeat of two online gambling initiatives, fantasy sports “simulated games” and “live” sports betting, with both prohibited at least until 2021 unless a special session is called.

Hall also announced that the Office of Public Policy would focus on energizing Louisiana Baptists in 2020 to help pass the Love Life Amendment, which would modify the state constitution to clarify there is no absolute right to an abortion in this founding document.

By Lane Corley MADISONVILLE, La. - Three years ago, our family was going through one of those down seasons in the ups and downs of life. My mental focus and physical health was declining. I was discouraged and struggling mentally and emotionally. I knew I needed to change a few habits. As part of a recovery … END_OF_DOCUMENT_TOKEN_TO_BE_REPLACED